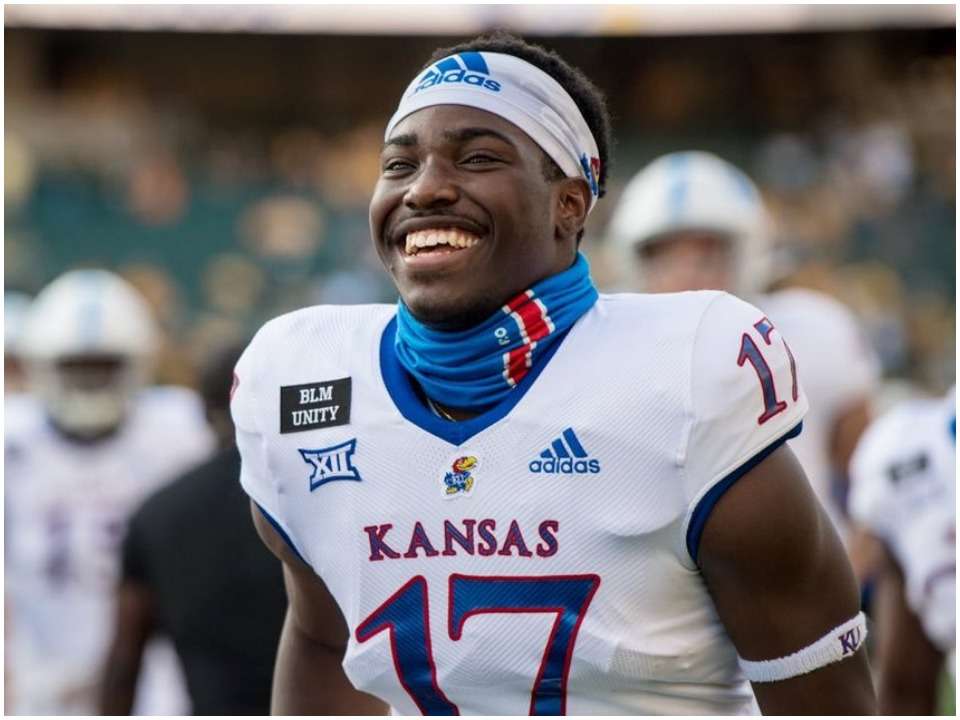 Jalon Daniels came as the savior for Kansas as he registered a total of 4 touchdowns against Texas in the ongoing NCAA Division I Football Bowl Subdivision. He is the true freshman who appeared in seven of Kansas’ nine games, starting six of them at quarterback, he completed 76 of 152 pass attempts for 718 yards through the air and one throwing touchdown.

Jalon Daniels was born on 9th January 1995, in Saint Louis MO. Daniels, is a Starkey and Tyrone’s son. There is not much information available on the web about Jalon’s early life. He plans to get a degree in computer engineering. Middle Tennessee, the Army, Louisiana-Lafayette, the Air Force, and other schools offered him scholarships, but he chose Kansas. ESPN and 247 Sports have rated him as a three-star recruit… At Lawndale HS in Lawndale, California, he was coached by Travis Clark… He completed 136 of 237 passes for 2,351 yards and 26 touchdowns as a junior, in addition to rushing for 940 yards and 10 touchdowns on 96 carries… In 2018, he helped Lawndale to a 14-2 record.

This season, the true freshman appeared in seven of Kansas’ nine games, starting six of them at quarterback. With a 50.0 percent completion percentage, he completed 76 of 152 pass attempts for 718 yards through the air and one throwing touchdown. During the season, he rushed for three touchdowns and led the team in rushing attempts (73 carries) and rushing touchdowns (three). During the season, he punted once for 34 yards on special teams. Coastal Carolina: Made his Jayhawk debut in the season opener. Completed one of two pass attempts for 13 yards. at Baylor: Completed career-high 19-of-33 throws for 159 yards in his first career start at quarterback.

On his debut collegiate drive, Jalon Daniels led the Jayhawks down the field for an eight-play, 79-yard drive that ended with a touchdown by Pooka Williams Jr. Oklahoma State: Started as quarterback for the second time in his career against the Cowboys. Passed for two yards on 3-of-5 attempts. at Kansas State: In his third career game, he started in Manhattan and threw for 207 yards on 22-of-39 passing. With an eight-yard rush in the second quarter, he scored his first touchdown as a Kansas player. The Jayhawks scored their fifth touchdown of the season. On 17 carries, he carried for a career-high 27 yards. In the third quarter, he punted for the first time in his career, gaining 34 yards.

In the second quarter, the rookie quarterback’s 36-yard pass to Luke Grimm was the longest passing play of the season and the Kansas offense’s fifth-longest play of the season. His 13-yard rush in the third quarter set a new career-high, surpassing his previous best of 11 yards against Baylor. He made his first start at the age of 18; his previous three starts came when he was only 17. Oklahoma State University: On the afternoon at Oklahoma, he completed 11-of-31 throws to his receivers for a total of 115 yards. He was one of six true freshmen to start for the Jayhawks on offense. His 48-yard touchdown pass to Kwamie Lassiter II in the first quarter was his first of the season and KU’s longest passing play of 2020.

The sportsman has kept his personal life absolutely private. There is currently no information on Jalan Daniels’ girlfriend. We believe Jalon is currently single, and there is no evidence of this because Jalon is not active on social media. Currently, Jalon holds 9295 Instagram followers and 12 posts on his account he doesn’t share much and keep his life more on the private side. Sometimes Jalon shares pictures of his game and wins to celebrate with his fans.

Being an emerging player in the football in upcoming days, he is destined to enjoy fame with wealth for sure. Currently, we’re unknown to his net worth but it is estimated between 250k- 500k dollars. But yet Jalon’s official net worth is not yet out but it will soon be.