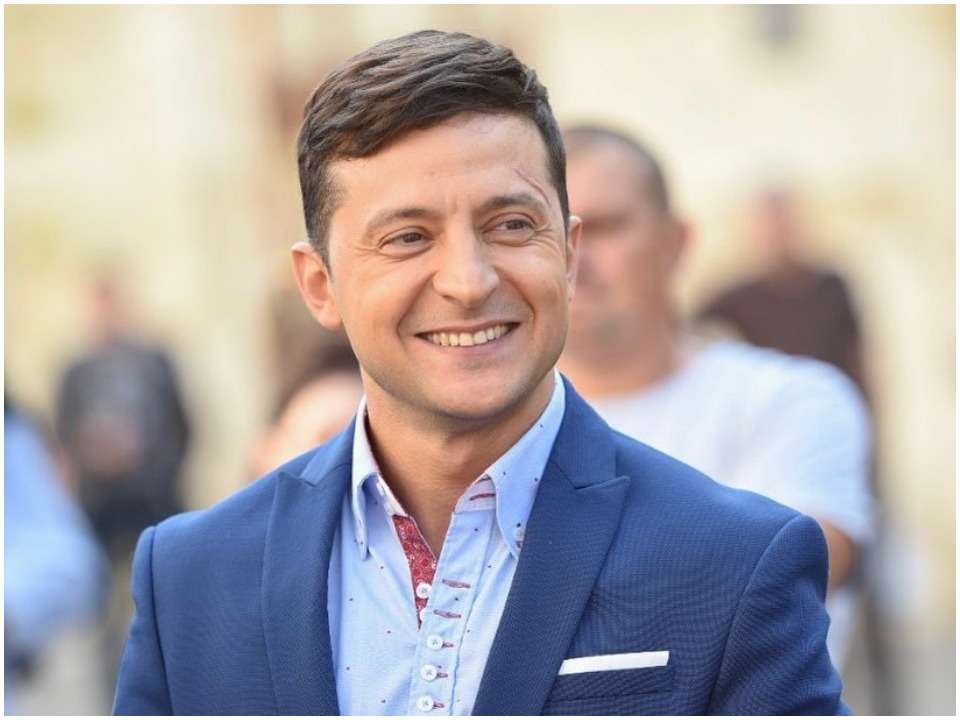 Volodymyr Zelensky is Ukraine’s 6th President serving since May 2019 and preceded by Petro Poroshenko. Previously he has worked in the entertainment industry as he pursued comedy and produced films or series. In the crisis of war against Russia, he is the one person who can end this conflict. But now Russian has almost invaded Ukraine and he has distanced himself from warnings of war.

Volodymyr was born on 25th January 1978 in Kryvyi Rih, Ukraine to his parents Rimma Zelenskaya and Oleksandr Zelensky. If we talk about his ethnicity then he is Jewish and raised in a Russian-speaking area of Southern Ukraine. He has not shared details about his siblings with the media. His grandfather named Semyon Ivanovych Zelenskyy served in Red Army at the time of World War II. His father worked as a professor while his mother was an engineer. Zelenskyy has completed his elementary school education and lived where his father worked in the Mongolian city of Erdenet. He also completed his high school education but has not shared any details. Later he went to Kryvyi Rih Institute of Economics and earned a Law degree. But he did not go to work in the legal field.

Zelenskyy started his career by joining the KVN team in a comedy competition and won in 1997 at KVN’s Major League. Later he focused on building his career in the entertainment industry. From 2006 to 2019 he was seen in many series and films. Some of the projects he worked in are Dancing with the Stars (Ukraine), Svaty, Servant of the People, Love in the Big City, Office Romance, Our Time, 8 First Dates, Love in Vegas, and many more projects.

After working in Servant of the People he showed interest in a political career and decided to pursue the same. He wanted to bring professional, decent people to power and world like to change the mood and timbre of the political establishment as much as possible. In 2018 he led a successful presidential campaign.

In 2019 he announced his candidacy for the Ukrainian presidential election. On 21st April 2019, he beats President Petro Poroshenko with a 73% vote. His first major proposal was to change the electoral system which was rejected by the Ukrainian Parliament. On 21st July 2019, his political party won the first single-party majority in Ukrainian history in parliament with a 43% party-list vote. This led to 254 of 424 seats occupied with his party.

During his presidency, he met with various countries presidents to talk about peace and trade. On 29th August 2019, there was a formation of the Honcharuk Government. He dismissed Bohdan as the head of his presidential administration and appointed Andriy Yermak. The next year he was seen with his family in Oman and was staying in Al Bustan Palace. He went over there to attend meetings, to spend quality time with his family and the expenditure was made by his personal account. He kept his Oman trip shot due to the plane crash of Ukraine International Airline Flight 752 near Iran.

On 24th March 2021, he signed the Decree 117/2021 approving the Strategy for de-occupation and reintegration of the temporarily occupied territory of the Autonomous Republic of Crimea and the city of Sevastopol. The same year he visited the USA and engaged in high-level talk with President Joe Biden.  He also went o Silicon Valley and met with tech companies like Apple Inc., Stanford University, and met with California National Guard. While he was delivering a speech at United Nations an assassination attempt was made and his driver was rushed to hospital with three bullet wounds as he was the closest aide.

In 2021-22 there was a Russian-Ukraine crisis. In April 2021 there was a Russian military at the Ukraine borders and he spoke to Joe Biden to urge NATO members to speed up Ukraine’s request for membership. On 26th November 2021, he accused Russia and Ukraine oligarch Riant Akhmetov of a backing plan to remove his government. Next month he called for preemptive action against Russia. The public started panicking as there were chances of war and so he released a video message to not panic.

The Russian invasion was putting the economy of Ukraine at risk which was disagreed by Zelenskyy and US President Joe Biden. As the invasion grew Zelenskyy appealed to abandon and move towards Moscow. The country has also been granted security assurances in exchange to give up the third-largest nuclear arsenal. He is reacting to this situation is a very calm manner and the public does not like his attitude in the way he is dealing as he expects no conflict with Russia. According to New York Times, he is over his head as he is not able to deal with this situation well. They are also running out of options while Russians are ordering more troops.

Zelenskyy is active on various social media platforms. He uses social media to express his views and opinions about current affairs around the world. In April 2019 he joined Twitter and has earned 496.3 thousand followers. On his Instagram account, he has 9.4 million followers and 197 followings. He also owns a YouTube Channel where he has 656 thousand followers.

Volodymyr is married to Olena Kiyashko. They both first met while attending the same school and tied a knot in September 2003 in an intimate wedding ceremony. In July 2004 they were blessed with a daughter named Oleksandra. Later in January 2013, their second child named Kyrylo was born.

Volodymyr Zelenskyy has earned a lot from his political career. Previously he has also worked as an actor and earned mainly from his projects and brand endorsements as well. According to sources his net worth has been estimated at around 37 million hryvnias which is $1.5 million.