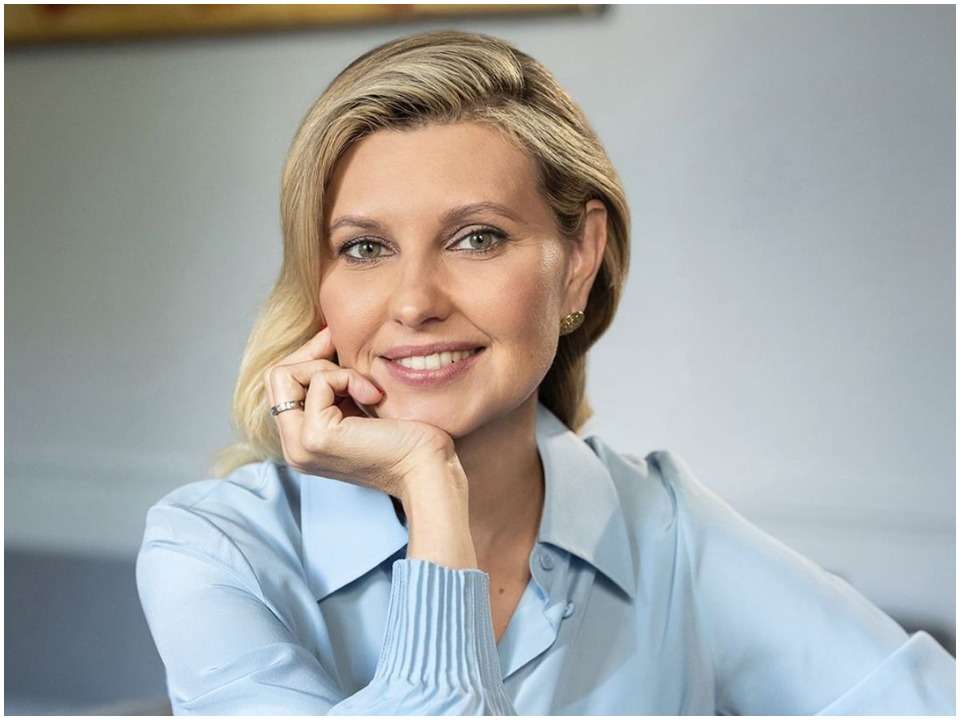 Olena Zelenska, in full, Olena Volodymyrivna Zelenska (before marrying, she was Kiyashko) is a Ukrainian personality who is the current first lady of Ukraine. Despite this, she is also an architect and a screenwriter by profession. In December 2019, Zelenska was nominated in the list of top 100 most influential Ukrainians by Food magazine where she took 30th place.

The first lady of Ukraine Olena Zelenska was born on 6th February 1978 and as of 2022, she is merely 44 years old. Olena was born and brought up in Kryvyi Rih, where she spent her life and received a degree in architecture from the faculty of Civil Engineering at Kryvyi Rih National University. She possessed the degree but unfortunately could not do much regarding the same field. Instead, she once wrote texts to Kvartal 95 and eventually became a writer.

On 20th May 2019, the architect cum the professional writer, Olena became the first lady of Ukraine. In November 2019, she appeared on the cover of the December issue of the Ukrainian edition of Vogue magazine. In one of her interviews, she spoke about her first initiative which was nutritional reform in Ukrainian schools. With the help of initiative, the first lady of Ukraine reformed the school nutrition system and started working on the menu with the help of chef Ievgen Klopotenko of CultFood. The reform was initiated with the combination of a complex program and the involvement of things like improving the quality, food safety, provision of resources to schools, nutrition of food, and many more.

Today, the updated school menu has at least 160 items ranging from traditional Ukrainian dishes to popular dishes from the different cuisines of the world. On 12th June 2020, Olena announced that she has been tested positive for the pandemic COVID-19. After four days, she was admitted into the hospital for further observation, where she was described as “moderate severity” and was not attached to any mechanical ventilation. Later, she was discharged from the hospital on 3rd July 2020. In June 2020, Olena began an initiative to spread the language of Ukraine in the world.

She worked and introduced the Ukrainian language with the help of audio guides in the most iconic places, particularly in the largest museums of the world. As soon as the initiative developed, the Ukrainian language was developed with 11 audio guides by 2020 in the museums of places like Austria, Italy, Azerbaijan, Latvia, Turkey, and Montenegro, including the two bus routes of Lithuania. In 2021, she presented a Ukrainian-language audio guide to the museums of Mount Vernon and the Fine Arts Museums of San Francisco in California. Later in September 2021, Zelenska took part in the fifth Ukrainian Women’s Congress.

The professional architect and writer, Olena Zelenska was not directly known to her future husband, Volodymyr Zelenskyy. The two were schoolmates but were not known to each other. Zelenskyy, in one of his interviews, said that he was known to the classmates of Olena but didn’t know her by name or face at the time. The pair got acquainted much later when she started studying at the Faculty of Civil Engineering at Kryvyi Rih National University.

Before becoming known to society as the wife of the president of Ukraine, Olena Zelenska was a graduate student of architecture and was working as a writer. She belongs to a reputed family where she might have developed a net worth of nearly $1-5 million. Even after becoming the first lady of Ukraine, Zelenska is taking lots of huge steps for the society to develop the education and social reforms with the initiative to provide good meals at schools of Ukraine.