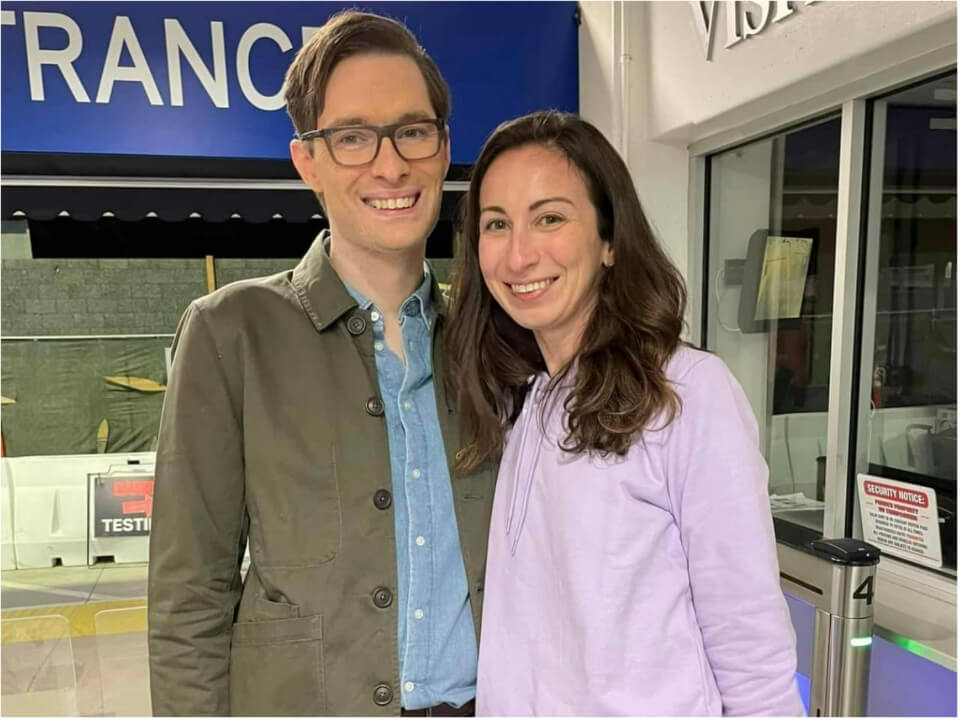 Troy Meyer is getting closer and closer each day to breaking the record of Ray Lalonde and Cris Panullo. Troy is the new contestant on the show Jeopardy who is famous as probably one of the best quizzers in the country. He is known to be a music executive from Tampa, Florida. He entered the show on 19th January 2023 (Thursday) and still has his foot strong on the stage.

Apart from his fierce answering techniques, he is compared to the actor Bill Hader. The fans say that the two look alike and share the same appearance when worn with spectacles. Troy is certainly keeping his reputation intact and proving why he is considered one of the best quizzers in the country. Meyer is on the 6 games winning streak at the moment and gathered a $214,802 total amount so far in the show.

Troy Meyer was probably born in 1983 because, at the time of his marriage, he was 27 years old in 2011. He grew up near Brecksville, Ohio but currently living in Tampa, Florida. There are no details available about his family and his education at the moment, but we assume he has attained higher education and is more interested in quizzes and trivia since his childhood. Troy spent a few years of his teenage in Chicago and worked in a rock band playing bass and also tried his hand in stock index futures as a day trader. In 2008, he finally came back to his native due to rest after a heart ailment. Also, he just broke up with someone so he had lots of time to follow his passion and gain knowledge.

On the very first day, i.e., 19th January 2023, Troy stood against a high school English teacher, Erin Portman, and the childcare professional, Hillary Kotler. The show was fascinating to watch because the high school teacher, Erin, and the music executive, Troy, both had the exact numbers, with a difference of only $500. On the one hand, Erin went back home with $27,190; on the other hand, Troy won the stage with $27,600, giving the third stage to the other contestant, Hillary Kotler.

On 20th January 2023, Troy played well and was about to compete for the winning price of Yogesh Raut (who had the winning amount of $41.6K on his first winning last week), but he had to stop and bagged the amount of $35,000. Later on the third day, 21st January 2023, the music executive can still showcase his talent to the fans. Fans are comparing him with the famous American actor Bill Hader, and it seems to be getting excited to see how the music man achieved his name after his wife did the same in 2009.

It is fantastic to see how the winner of two days is showcasing his forceful talent and eagerness to answer instantly or quickly. He already amazes the fans with his two-day earnings of $62.6K, making him unstoppable for the third-day game. The fans assume that Troy would be the man next on the Tournament of Champions on Jeopardy. Already the fans would be seeing the 13-day winner – Ray Lalonde, 21-day winner – Cris Pannullo, five-day champion – Luigi de Guzman, and four-day champion – David Sibley, on the next round of the stage- “Tournament of Champions.” We wish Troy Meyer luck for his upcoming days and the strength to compete successfully.

Troy Meyer is a happily married man with a wife and a son. The year he was going to marry, he did not know that his future wife was a former contestant on Jeopardy. The wife, Genevieve Sheehan, is a product leader based in Tampa, Florida. At 27, Troy’s wife became a contestant on the show and won the hearts of many with her fierce answering technique, as did by Troy Meyer this year. At the time of their marriage, both partners were 27 years old.

On the one hand, Troy was shifted to Brecksville in October 2008 after spending years in a rock band playing bass in Chicago. The wife, Genevieve Sheehan, lost the game Jeopardy after two winnings but was featured by the New York Times, interviewing the partners and the family, showcasing their love for Jeopardy and the success achieved so far. The couple got married on 30th December 2011 and have been together till now, with a son.

Troy has no social media accounts. This would be an excellent chance for the family to achieve great success and popularity through the Jeopardy show. However, Troy’s wife, Genevieve Sheehan, is available on Linkedin showcasing her belonging from Tampa, Florida- @genevievesheehan.

Troy is an ordinary man who is working really hard to satisfy the daily needs of his family. So, whatever he earns surely comes from his career as a day trader along with a music executive. On top of that, he is on a two-day win streak on Jeopardy which also adds an additional value of money to his wealth. Although, there is no estimation available about his overall net worth or income.