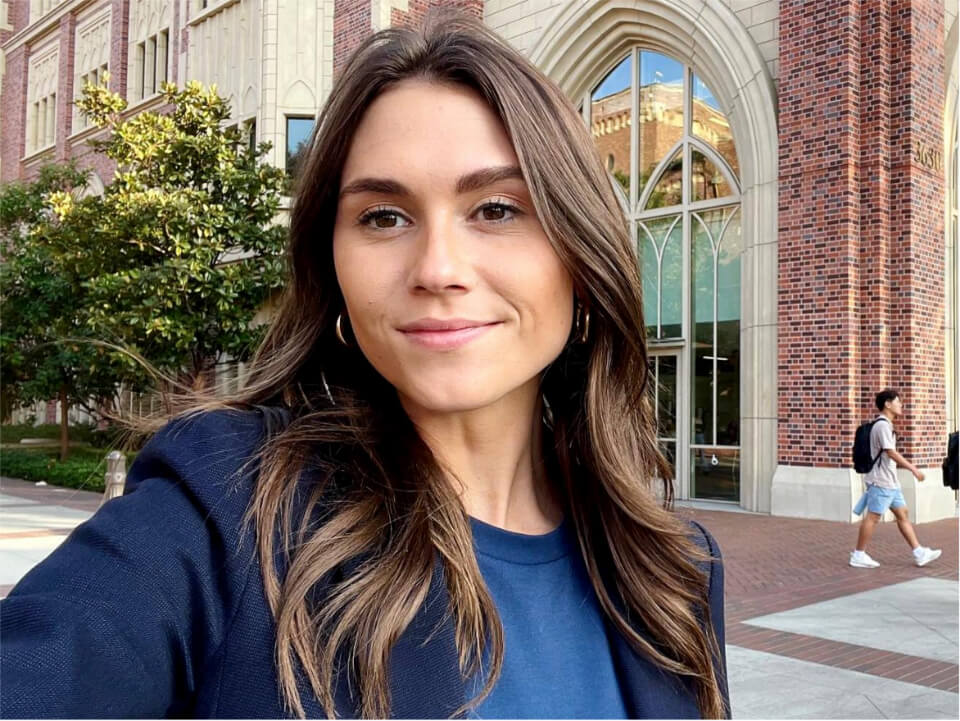 Sophie Flay is a young and beautiful American community journalist who works at ABC7 Eyewitness News. She is well known to the world as the daughter of a famous celebrity chef Bobby Flay, who owns many famous restaurants and fast-food franchises throughout the whole nation.

Sophie Flay is the daughter of famous chef Bobby Flay and her mother Kate Connelley who was a famous actress. She was born on April 16, 1996, in Albany, New York in the United States of America. Sophie also has a stepbrother named Jonathan, who was from her mother’s previous relationship. She is the granddaughter of Bill Flay and Dorothy Flay. Sophie is of Caucasian ethnicity and currently resides in Hollywood, Los Angeles, California, USA. As for her education, Sophie received her high school education from Fairfield Warde Highschool located in Connecticut. Later, she attended the University of Southern California in California from which she earned her graduate degree in the field of broadcast and digital journalism.

Sophie’s career began when she was just a student at the University and she worked as an intern at the TODAY Show where she got a chance to attend the 2016 Summer Olympics held in Rio de Janeiro after that, she graduated and again did an internship at ABC7 news channel for the Winter Olympics held in Pyeongchang in the year 2018. She officially joined the channel in 2019. She has also interned for companies like The Walt Disney Company, Dash Radio, and NBC News. Sophe also lent her voice off-camera as she worked for Spotify as an ad voice track artist in May 2016. She used to write for her school’s website called USC Anneberg Media.

She made her first television show appearance in 2011 on an episode of America’s Next Great Restaurant. Sophie was then seen on Racheal Bay, Brunch at Bobby’s, and Beat Bobby Flay. She made her own mini-series along with her father in 2015 for Food Network’s Snapchat Discover. She even hosted a late-night dessert event at the 2018 Food Network and Cooking Channel South Beach Wine and Food Festival for all the attendees. In 2021, she started iHeartRadio podcast called Always Hungry with Bobby Flay and Sophie Flay, and recently, she co-authored a book with her father called Sundays with Sophie, published by Penguin Random House book which will be coming out in October 2022.

Sophie is a beautiful woman who is currently engaged to her boyfriend Jesse Baer. The couple has been dating for quite some time now. They spend their time together by going on holidays or traveling on weekends and keep their fans updated by posting their pictures on social media. Before dating Jesse, Sophie was involved in a previous relationship with Matt Wood but due to some reason, they broke up. She uses Instagram with the username @abc7spohie where she describes herself as a community journalist, adjunct professor, contributor, and co-host. She is available on Twitter with the username @abc7sophie which she joined in April 2019.

Sophie is quite an independent woman and chose a very different career from the rest of her family. As of 2022, she earns an approximate net worth of $500000 USD which she earns as a professional journalist, reporter, podcast host, and also as a famous TV personality. She still has a long way to go and is expected to earn more in the near future.