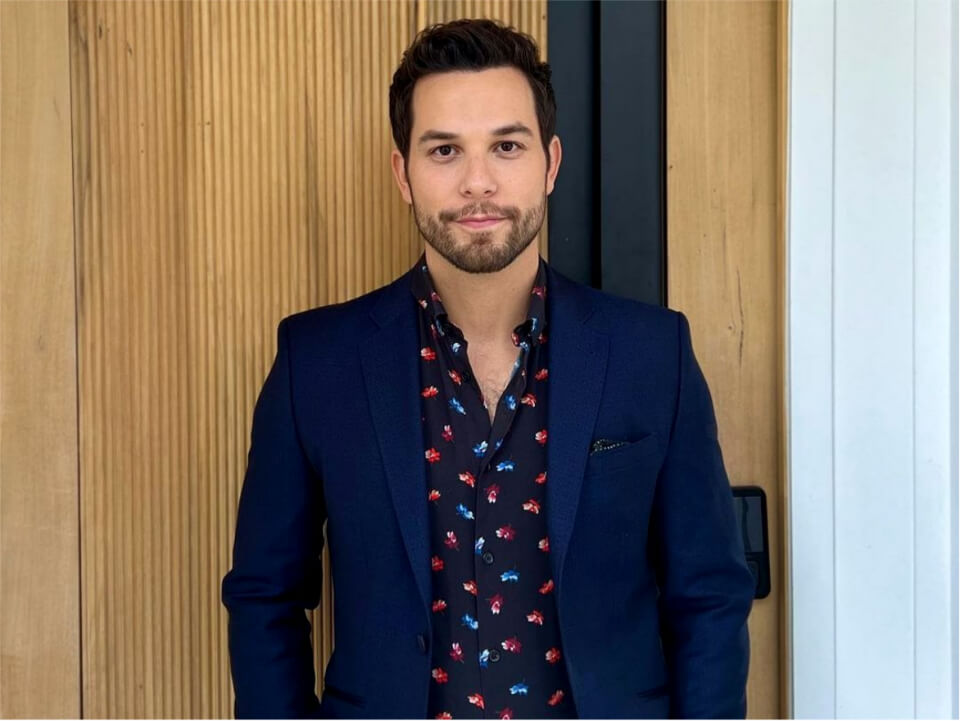 Skylar Astin is a popular America-based male actor and singer. He is best known as Professor James Morrow for the Disney Channel original movie Secret Society of Second-Born Royals (September 2020). He portrayed the lead role of Todd in the CBS legal drama series “So Help me Todd” and he managed to win the hearts of viewers with his impeccable acting.

Skylar Astin was born on 23rd September 1987 in New York City, in Rockland County. He grew up with a sister, Brielle, and two brothers, Milan and Jace. His father is named Barry Lipstein, a garment industry executive, and his mother is named Meryl Lipstein. His brother Jace Lipstein, an American designer at Grungy Gentleman. Jace married Casandra Lipstein in November 2020 and has a baby named Luca Riley Lipstein (born on 16th September 2021).

He graduated from Clarkstown High School North, New York, where he attended summer camp at Stagedoor Manor, N.Y, in performing arts. Since childhood, he was more interested in acting, singing, and various co-curricular activities rather than in studying. He went to the Tisch School of the Arts at New York University, and when he got his debut role in Spring Awakening, he took a leave of absence from college.

Skylar also starred in various films. Being a famous actor, he starred in the comedy movie 21 and Over (March 2013) as Casey, which was written and directed by Jon Lucas and Scott Moore. Later, he was seen in the TBS sitcom Ground Floor (2013-2015), which Bill Lawrence and Greg Malins created. He played the character of Brody Carol Moyer, a young ambitious money manager who falls for a girl on the ground floor. He also led an NBA comedy pilot on ABC.

As a talented actor, he was featured in various films such as Flock of Dudes (2016), Speech & Debate (2017), Hot Air (2018), and much more. He was seen in the horror film Ghosts of War (2020) as Eugene, which was written and directed by Eric Bress. In 2019, he played the character of Baker in the Hollywood Bowl production of Into the Woods from July 26–28, 2019, directed and choreographed by Robert Longbottom. Later, he featured in the musical dramedy Zoey’s Extraordinary Playlist as Zoey’s best friend Max Richman.

The series was created by Austin Winsberg on NBC network and each cast member sang their own character’s songs. He was seen in the British horror film Ghosts of War (2020) as Eugene, which was written and directed by Eric Bress. In September 2022, he was featured on CBS network in the lead role of Todd for the legal drama “So Help Me Todd”, which was created by Scott Prendergast.

Skylar began her career in small roles. He played the character Georg, a male student with a crush on his piano teacher in the original Off-Broadway and Broadway cast of Spring Awakening. He filmed the role of Rand Posin in the movie Hamlet 2 (August 2008), which earned $4.9 million at Box Office. Later, on screenings of the film at the 2008 Sundance Film Festival, he sang “Raped in the Face” on the soundtrack with Phoebe Strole, a Spring Awakening castmate, and his co-star in the film, and the film’s star, Steve Coogan.

Due to Austin’s singing talent, he got the opportunity to work with United Talent Agency (UTA), a global talent agency based in Beverly Hills, California. In 2012, he stepped to opportunity and found his breakthrough by starring in the comedy film Pitch Perfect (2012), as Jesse Swanson. Later, he reprised the role in the 2015 sequel Pitch Perfect 2.

Skylar is divorced as of 2023. In 2006, he was in a relationship with famous singer Lauren Pritchard also known as Lolo. She is also an American songwriter and actress. In 2013, he then began dating Anna Camp, an American actress, and singer. Anna camp is famous for its musical comedy Pitch Perfect film series (2012–2017). Both engaged in January 2016.

Later, they married on 10th September 2016. On 19th April 2019, the couple announced that they were filing for divorce and had no children. In late August 2019, the divorce was finalized and he was officially single. According to an Instagram shared post of a romantic flick of the two kissing stars in July 2020, – Austin may be involved in a relationship with Lisa Stelly.

Skylar Astin is active on social media platforms such as Instagram, LinkedIn, and Facebook. As of January 2023, he has 15.3K subscribers @skylarastin3986 on his YouTube channel. He has 365.3k followers @SkylarAstin on his Twitter account. Skylar has 1.2M followers @skylarastin on his verified Instagram account. He was featured and collaborates with various magazines such as FAULT Magazine, W magazine, Glamour, New York Times, etc.