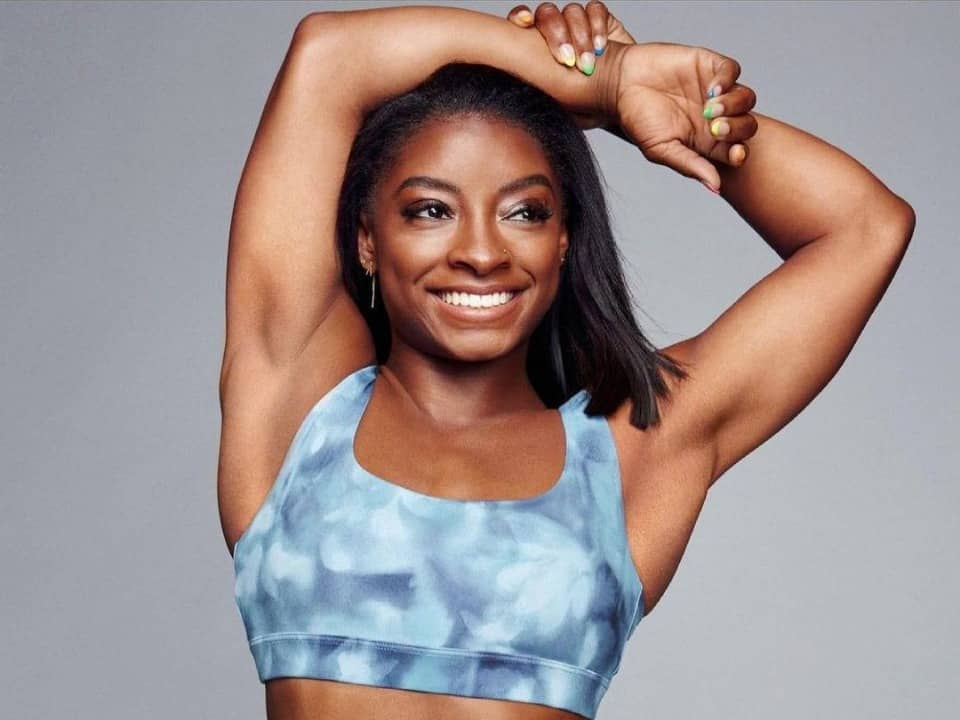 Simone Biles is an American gymnast who is known worldwide as the most decorated gymnast and holder of more than 30 international titles. Simone doesn’t need any introduction because currently she is considered among the list of best athletes in the USA. Despite being too young and tender, she is one of the most respected and greatest gymnasts of all time. Team USA is very hopeful this time in Tokyo Olympics for clinching gold medals and no doubt, Simone is the one who can do wonders.

Simone was born on 14th March 1997 in Columbus, Ohio, USA. She was born in a family of six with four siblings. She is the second youngest of her siblings Adria, Ashley, and Tevin. Her mother was Shanon Biles who sent all her kids to foster care due to being unable to care for them. she and her siblings were later taken care of by their grandparents who also adopted Simone and Adria later while the other two were adopted by Shanon’s aunt. She holds Belizean as well as American citizenship and is a catholic.

Simone attended public school for a few years after which she decided to shift to homeschooling in 2012 to focus more on her gymnastic training. She graduated in 2015 and committed to UCLA and signed a letter of intent to join the college but instead joined the University of People, an online college as she had turned professional the same year. She studied Business Administration.

Simone started her career in 2011 when she became an elite at the age of 14 and competed at the American classic and USA classic 2011. In 2012, American classic, she stood first in the all-around vault after which she secured a spot at USA national championships 2012 where she also finished 1st all-round on vault along with other achievements. Her debut in international games was in 2013 when she competed in the American Cup and finished second. She also competed at the 2013 City of Jesolo Trophy and won a gold. Simone was then named the 2013 US national all-around champion and various silver medals.

She continued her form and kept winning titles and medals at several national and international events like World Artistic gymnastic championships etc over the years. In 2016, she won the all-around title with the highest score at the pacific rim championships and also won gold and silver medals at the US national championships in 2016 after which she was selected for the Rio Olympics 2016. At the Olympics, she was individually qualified for several events as a top score holder and won her first gold medal in Olympics.

She won a total of 4 medals including 3 gold medals, 1 bronze which led the USA team to win the title at the Olympics. she was later chosen as the flag bearer at the closing ceremony. In 2017, she took a hiatus and released an autobiographical book on her journey named “, Courage to Soar: A Body in Motion, A Life in Balance’. She made her comeback in 2018 and again set forward to win titles and several gold medals at the 2018 US classic, USA national championships as well as world championships. Her total medal tally that year was 15 gold two silver and 1 bronze.

She maintained the form in the upcoming year again inning several medals till 2019. After the pandemic in 2020, she again came back to her form this year with 3 gold medals at the US classic, 4 golds at USA national championships, and also finishing at the first position in the 2020 Tokyo Olympic trials. She is currently leading the USA national artistic gymnastics team to the 2020 Tokyo Olympics. Moreover, before the Olympic events, at the practice sessions, She flawlessly mastered the world’s most toughest and difficult vault- the Yurchenko Double pike which sends the hint of what great moves she has in store for her this Olympic season.

Simone was caught up in a controversy before the 2016 Rio Olympics after the information about her Doping was released. She was accused of Doping by WADA after which she went online to explain her ADHD disorder. She disclosed that the medications for ADHD caused increased moto activity which mimicked the behavior of doping.

Simone was known to be in a relationship with fellow gymnast Stacy Erwin JR in 2017 but the two broke up last year in 2020. Since then, she has been dating the American footballer Johnathan Owens. She is known to be a sexual assault survivor of the infamous Larry Nassar who was accused of harassing several female gymnasts. Although Simone opened up about the assault, she did not participate in the trial.

Simone has been working as a professional gymnast for several years and has also earned a lot of wealth through all the titles she has won over the years. Her estimated net worth as of 2020 is around $6 million.

Simone Biles is one of the greatest female gymnasts ever known to the world and over the stretch of her career, she has created such a powerful impact on the world which has led her country to glory as well as inspired many young gymnasts to achieve their dream. She enjoys her life to the fullest and practices her sport will all the love and passion. She is never let down by difficulties and her focus is always on the bigger and greater good. We wish her luck for the Olympic 2020 season.