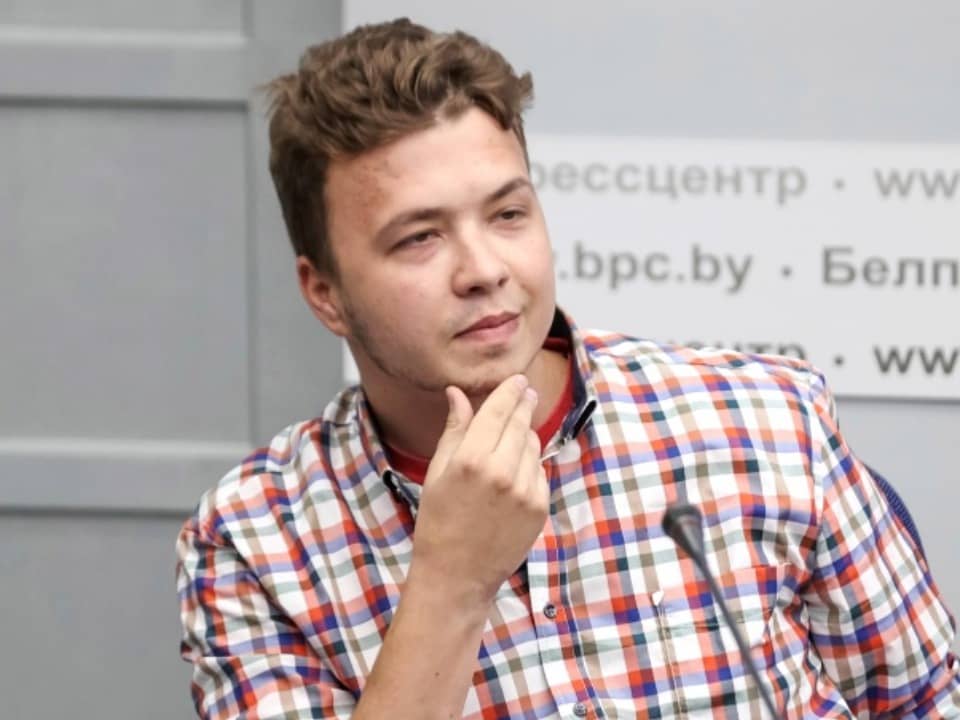 Roman Protasevich, also known as Raman Dzmitryevich Pratasyevich is a journalist, blogger, photographer, and political activist from Belarus. He was the chief editor of the Telegram channel “Belarus of the Brain” and the editor-in-chief of the Telegram channel Nexta. Belarusian authorities apprehended Protasevich after his flight, Ryanair Flight 4978, was diverted to Minsk on the orders of Belarusian President Alexander Lukashenka on May 23, 2021, Belarusian Air Traffic Control issued a fake bomb threat.

Roman Protasevich was born in Minsk, Belarus, Europe, on May 5, 1995. Dmitry Protasevich, Protasevich’s father, is a Belarusian Army Reserve Officer and lecturer at a Belarusian Military Academy. Less information is available about her mother. In the year 2020, his parents relocated to Poland so that they all can live together as a family. He was last enrolled with Belarusian State University studying Journalism until he was expelled.

Since the early 2010s, when he was detained several times, Protasevich has been an opposition activist and has participated in several protests against the government. He has been a member of the opposition group, Young Front, since 2011. Roman co-administered a significant group in VKontakte (social network) in opposition to the current Belarus President Alexander Lukashenka until it was hacked by the police in 2012. He took part in the Euromaidan protests for a month.

Roman was expelled from Belarusian State University in 2018 after studying journalism there. He was accused of taking part in an unauthorized event in Kurapaty in 2017. However after he was able to prove in court that he had an alibi for that day, the opposition got big news. He said in an interview that he worked as a Reporter for several major Belarusian media outlets for several years.

He worked with Radio Free Europe/Radio Liberty’s Belarusian station, and he was a Václav Havel Fellow in Journalism in Prague, which the broadcaster co-sponsored from 2017 to 2018. For Euroradio.fm in March 2019, he had shot the meeting of Austrian (Sebastian Kurz) and Belarusian (Sergey Rumas) Prime Ministers in Minsk. He made few video reports for Euroradio about Chechen refugees attempting to enter the EU through Belarus, with evidence supporting photographs. Protasevich relocated to Poland in 2019 and later requested political asylum in Poland on January 22, 2020, after sensing danger to his life. In the year 2020, Protasevich and co-creator Sciapan Pucila controlled the Nexta Telegram channel. (Stepan Putilo).

After Belarusian authorities attempted to block internet access during the 2020 presidential election, Nexta became one of the primary sources to pass information about the protests against allegedly rigged elections and began to coordinate the demonstrations in August 2020. In just one week, the channel had gained roughly 800,000 subscribers. Protasevich left Nexta in September 2020 and on March 2, 2021, declared that he had started 3. 4. working for the “Belarus of the Brain” Telegram channel, which was formerly moderated by an imprisoned blogger, Ihar Losik.

Roman is in news due to the arrest ordered by the President of Belarus. Here’s a rundown of what happened:

On May 23, 2021, Ryanair Flight 4978, which had Protasevich on board, got a bogus bomb threat and was redirected to Minsk National Airport by Belarusian air traffic control. While in Athens, Protasevich sent Telegram messages claiming to have spotted a bald man following him throughout the airport and photographing him. The jet was forced to land in Minsk owing to a bomb threat, according to airport officials. The plane reversed course shortly before it would have entered Lithuanian airspace. According to Lithuanian airport authorities, they had not been alerted of a bomb threat.

Protasevich instantly delivered some of his bags to his girlfriend after learning of the diversion to Minsk, according to a witness reported by Reuters. Protasevich and his girlfriend were detained at the passport control in Minsk. There was no bomb on board. Belarusian President Alexander Lukashenko, according to his press office, personally ordered the plane to be redirected to Minsk and dispatched a Belarusian Air Force MiG-29 fighter aircraft to accompany it.

Protasevich and his partner Sapega were placed under house arrest on June 25, 2021. The two had agreed to a plea deal in which they would “reveal their collaborators and try their utmost to compensate for the damage they caused,” claims investigators. Protasevich was given an internet connection on July 7, 2021, and he formed a Twitter account, claiming that he lived with Sapega in a private house outside of the town with a courtyard and that no one had beaten them. Our reporters were “unable to verify whether the account belonged to Protasevich or whether he was drafting his comments without assistance,” according to Reuters.

Roman Protasevich is dating Sofia Sapega, a Russian citizen living in Belarus from a young age. She was an international law student at the European Humanities University in Vilnius at the time of her arrest. According to Sapega’s mother, Sapega and Protasevich had known one other for around six months before his detention in May 2021.

Protasevich has an estimated net worth between $400 thousand to $600 thousand USD. We could not confirm his source of income or earning details.