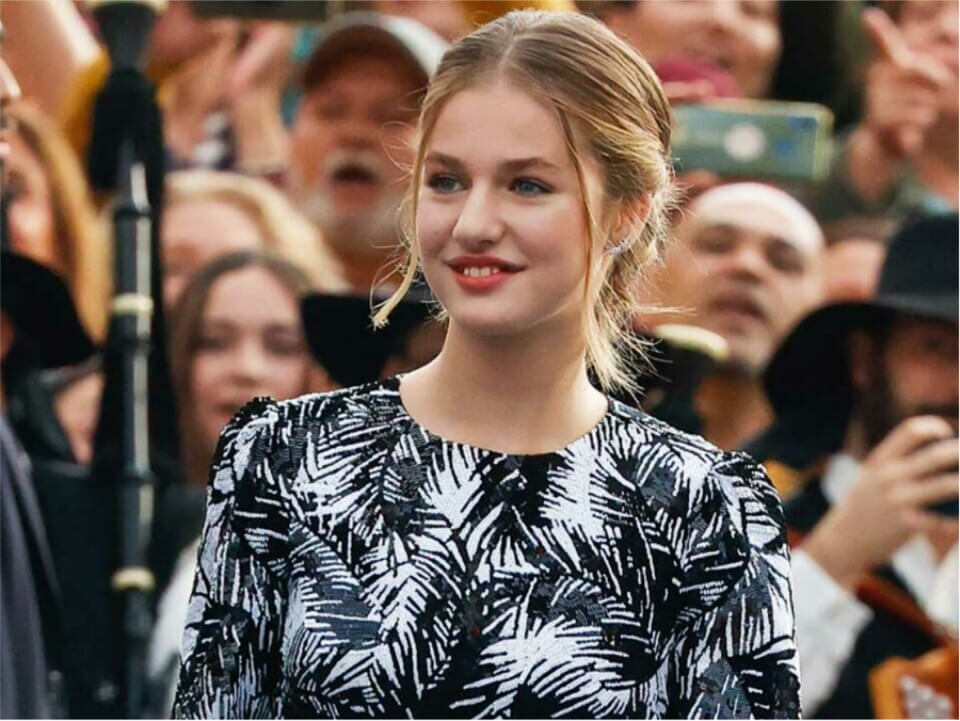 Princesa Leonor belongs to the royal family and is officially known as Princess of Asturias. She is recognized as the eldest daughter of King Felipe VI and Queen Letizia. She is an heir presumptive to the Spanish throne Princess of Girona, Princess of Viana, Duchess of Montblanc, Countess of Cervera, and Lady of Balaguer. In October 2022, she returned to Spain from college break. She came ahead of her 17th birthday, and she reunited with her royal family in Spain ahead of her big day. She also attends the 2022 Princess of Asturias Awards Ceremony and delivers her fourth speech.

Princesa Leonor was born on 31st October 2005 at 01:46 in the Ruber International Hospital in Madrid. As of 2022, she is a 17-years old stylish Princess of Asturias. On 14th January 2006, she was baptized in the Zarzuela Palace by the archbishop of Madrid, Cardinal Antonio Rouco Varela. Her father’s name is Felipe VI and he is the king of Spain. Her mother’s name is Letizia Ortiz Rocasolano and she is the Queen of Spain. She has a little sister whose name is Sofía. Her sister, Sofia is a 15-year-old student at the Santa María de Los Rosales school in Madrid.

Princess Leonor went to the children’s daycare of the Spanish Royal Guard named Escuela Infantil Guardia Real. On 15th September 2008, she began her first year of primary school outside Madrid, at the Santa María de Los Rosales School in Aravaca. In May 2014, she made her first official visit to the San Javier Air Force base in Murcia. According to Catholic custom, she received her First Communion on 20th May 2015. In January 2018, Princess Leonor officially received the collar of the Golden Fleece in a ceremony at the Royal Palace of Madrid from her father, King Felipe.

She conducted her first public engagement outside the palace in September 2018. She also accompanied her parents to Covadonga to celebrate the 1,300th anniversary of the Kingdom of Asturias. On her 13th birthday, she gave her first public speech, held at the Instituto Cervantes in Madrid, on 31 October 2018. During the speech, she read the first article of the Constitution of Spain, and the speech coincided with the 40th anniversary of the constitution. On 18 October 2019, she appeared publicly and gave a speech at Premio Princesa de Asturias.

After that, she appeared and spoke publicly, giving a speech at the Princess of Girona Foundation awards in Barcelona, where she spoke in Spanish, Catalan, English, and Arabic. On 10 February 2021, it was declared that in the autumn season of 2021 she would continue her secondary education at the UWC (United World College) of the Atlantic in Wales, studying the 2-year IB Diploma Programme (International Baccalaureate Diploma Programme). She became part of her first public solo engagement the same month by visiting the 30th anniversary of the Instituto Cervantes.

Princesa Leonor is not having an official account on social media platforms. Since 2014, an Instagram account @princess.leonor has 11.2 k followers. The account has a user name 🌞Leonor❣️Sofia🌻 and shares images of the Spanish Royal Family. In July 2022, Princess Leonor of Asturias along with her sister Infanta Sofia undertook their first official international trip. Both Spanish Royal Sisters traveled to London to support and cheer the Spanish team at The 2022 UEFA European Women’s Football Championship.

As of 2022, Princesa Leonor is not dating anyone or not involved in a love relationship. Princess Leonor is single. She is currently bearing the titles like-