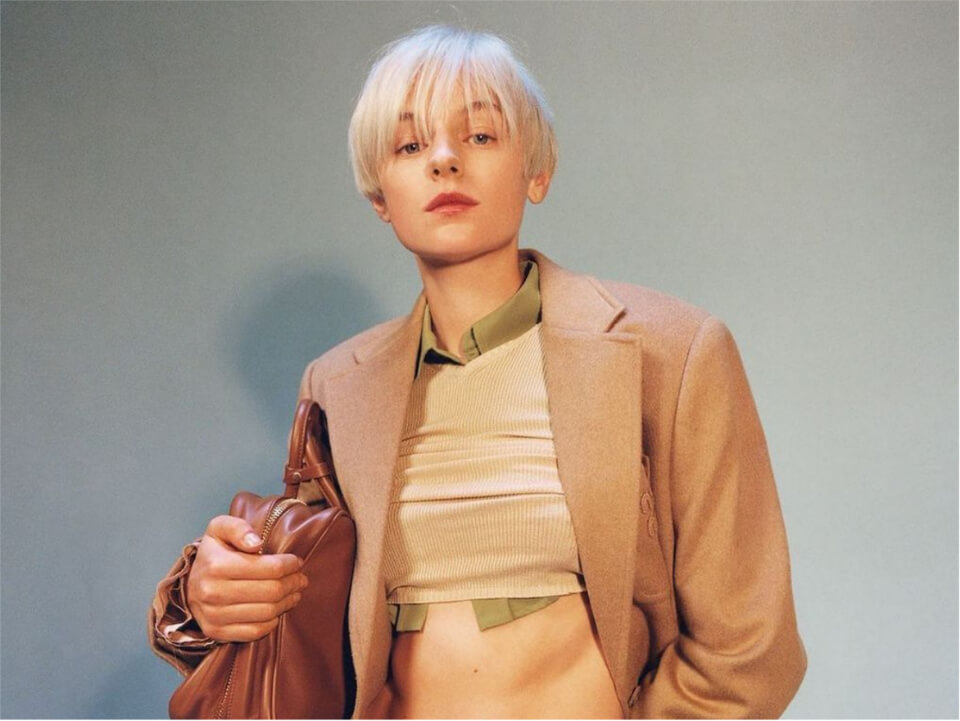 Emma Corin is a well-known female actress and model. Her full name is Emma-Louise Corrin. In 2021, she was nominated for the category Best Actress in a Drama Series, Best Actress – Television Series Drama, and MTV Movie & TV Awards 2021 for Best Performance in a Show. Additionally, she became Vogue magazine’s first nonbinary cover star in 2022. She was a star in the short film “The Power of the Lobster” for Vogue’s August issue and the film Writer & Director: Scott Sternberg on 6th July 2022.

Emma Corin was born on 13th December 1995 in England. Emma’s father’s name is Chris Corrin and he is a businessman. She is very close to her mother and her mother’s name is Juliette Corrin who is a speech therapist from South Africa. Emma was raised in Royal Tunbridge Wells, Kent, England with two younger brothers – Richard Corrin and Jonty Corrin. She went to the Roman Catholic Woldingham School, girls boarding school in Surrey. Since childhood, she has interest in acting and dance. She also attends the London Academy of Music and Dramatic Art to improve her acting skills. In 2015, she went to St John’s College, Cambridge, and majored in English, Drama, and the Arts. Later, she earned a bachelor’s degree in 2018.

Emma began her career as an Actress after completing college. She made her television debut in 2019 with a guest appearance in an episode of the ITV detective drama “Grantchester”. After that, she was seen in the role of Esme Winikus in the first season of the Epix DC American TV-Series Pennyworth (2019). In the same year, she also made her feature British comedy-drama film debut in the role of Jillian Jessup in the film “Misbehaviour 2020”. The film was directed by Philippa Lowthorpe and she worked alongside stars such as Keira Knightley, Gugu Mbatha-Raw, and Jessie Buckley.

She rose to fame as one of the UK’s brightest young stars. In April 2019, she had been selected to participate in the fourth season of the Netflix historical drama “The Crown”, which was released in November 2020. She was seen in the role of Princess Diana, for which she was nominated for the Primetime Emmy Awards 2021 for “Outstanding Lead Actress in a Drama Series”. Emma Corin is a talented actress and won the Critics’ Choice Television Awards 2021 for the category of “Best Actress in a Drama Series”. She also won Golden Globe Award 2021 for the category of “Best Actress – Television Series Drama”.

In 2021, she was cast for the “Anna X” at Harold Pinter Theatre, The Lowry to play the role of Anna. She was also nominated for and won the Laurence Olivier Award 2022 in the category of Best Actress. Olivier Award 2022 Winner, Emma Corrin was again cast on the stage to play Orlando, which is based on the novel by Virginia Woolf. She played Orlando from 26th November 2022 – 25th February 2023 at the Garrick Theatre, London. In 2022, she was also seen with star Jack O’Connell in a sensual new adaptation of Lady Chatterley’s Lover which premieres NETFLIX, on 2nd December 2022.

Presently, she was seen in the role of Marion Taylor in the film “My Policeman” a 2022 American romantic drama, directed by Michael Grandage. In the film, she marries a gay policeman, Tom (Harry Styles), who is in love with a museum curator, Patrick (David Dawson).

Emma Corin’s marital status is unmarried. In July 2021, Emma updated their pronouns on Instagram to she/they and later updated it to they/them. It is doubted that she is homosexual. She also talk with the New York Times about her identity, the screen star explained:

‘My identity and being nonbinary is an embrace of many different parts of myself, the masculine and the feminine and everything in between.’

Emma Corin earns mainly from her career as an Actress. She was honored and featured in the Next Generation Talent list for 2020 from @hollywoodreporter. As of 2022, Emma Corin earned an estimated net worth of around $ 2 Million.