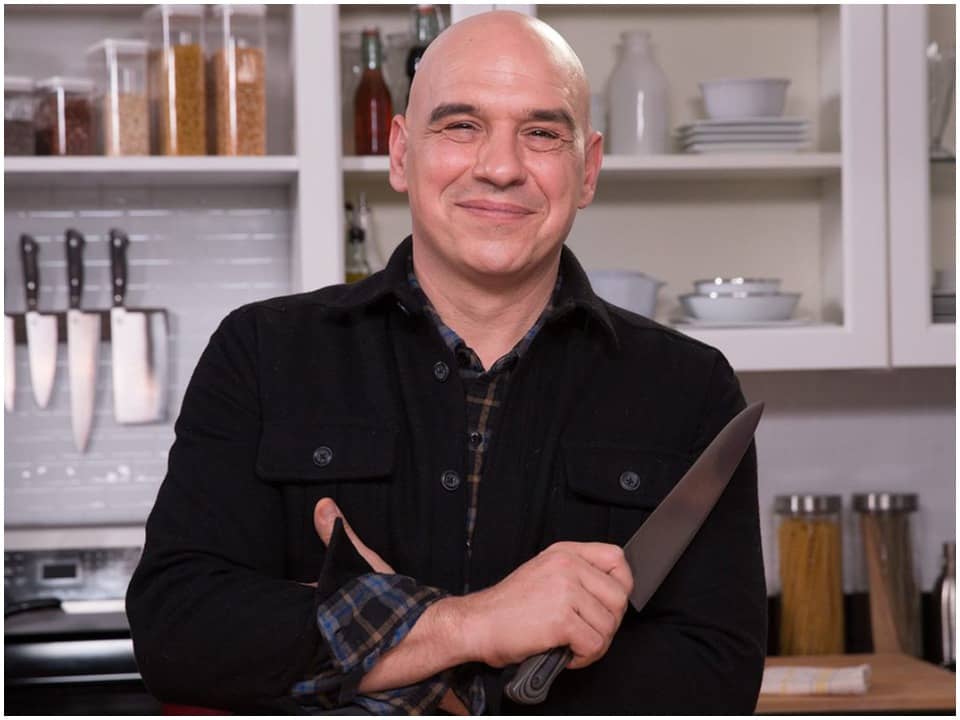 National Rising Star, Michael Symon is an American Chef, restaurant owner, author, and television personality. A household name for his regular appearance on shows like “Iron Chef America”, “Food Feuds” and “The Best Thing I Ever Ate” among many others. He was also the former co-host of the TV show “The Chew”. He is also known for cooking with soul!

Michael D Simon was born on September 19, 1969, in Cleveland, Ohio. He grew up in a Greek and Sicilian family. He was raised in North Olmsted, Ohio. His parents are Angel Symon and Dennis Symon. He has a sister Nikki Symon. He plays golf and also enjoys gardening and often plant pants in his backyard. His favorite sport is football and he just loves dogs.

He attended St. Richard School in North Olmsted. And later St. Edward High School in Lakewood. Michael graduated from the Culinary Institute of America in Hyde Park, New York in the year 1990. His first part-time job was at Geppetto’s Pizza and Ribs on Warren Road as a cook.

Before branching out and having his own restaurants, Symon worked for many of Cleveland’s top restaurants like player’s, Piccolo Mondo, Giovanni’s, and The Caxton Cafe. In 1997, he opened his first restaurant Lola with his then-fiancé and now wife, Liz Shanahan. The opening of it was a success and remodeled the area, making it lively. It was named one of America’s Best Restaurants in Gourmet magazine in its October 2000 issue. Later in 2005, Symon converted Lola into Lolita and reopened it in downtown Cleveland. In April 2006, Symon opened a third restaurant named Parea in New York City.

This restaurant was listed on ‘100 Tastes to Try in 2007’ in Food & Wine magazine which was later closed in 2007. In autumn 2007, Symon opened ‘Roast’ in Detroit, Michigan. It was named the 2009 Restaurant of the Year by the Detroit Free Press. In 2009, he opened B Spot, a hit hamburger-focused restaurant in Woodmere, Ohio. On April 11, 2016, Symon opened another hit restaurant, Mabel’s BBQ. And in December 2018, another Mabel’s BBQ opened in Las Vegas. Due to covid and the pandemic financial pressures, Symon closed down Lola. He closed down the last remaining B Spot and is planning to change it to Mabel’s BBQ. B Spot was opened in 2010 and is now being renovated. He plans on opening this summer.

Symon made his debut on Television with his appearance on “Sara’s Secrets with Sara Moulton ” on Food Network in 1998. He later appeared on both “Ready, Set, Cook” and “FoodNation with Bobby Flay” the same year. He then hosted over 100 episodes of “The Melting Pot”. In 2008, he won season one of “The Next Iron Chef”. In 2011, he joined ABC’s “The Chew” as one of its hosts. Along with being a tv personality and cook, Symon also published books. His first cookbook “Michael Symon’s Live to Cook- Recipes and techniques to Rock Your kitchen” was published in 2009. He also wrote many other books like “Carnivore” and “5 in 5”. Symon is currently working on another volume of Fix it With Food. It’ll be released in November 2021. And his third season of “Symon’s Dinners Cooking Out” is set to air on May 29th on Food Network.

Symon has a huge fan base for his extraordinary cooking skills. He connects with his fans through social platforms. Micheal uses Twitter where he has around 670.5k followers and Instagram with a following of around 655k. He also has a Facebook page with around 970k followers.

Michael Symon married Liz Shanahan on November 1, 1998. They have a son, Kyle who is now married and has a 2-year-old daughter. Symon and his wife adopted a puppy in 2020. Due to Covid, he is getting to spend more time with his wife, son and daughter in law and his grandchild.

Michael Symon is incredibly famous and successful. He earns through his restaurants, television show hosting and authoring. It is estimated that his net worth is around $8 million.