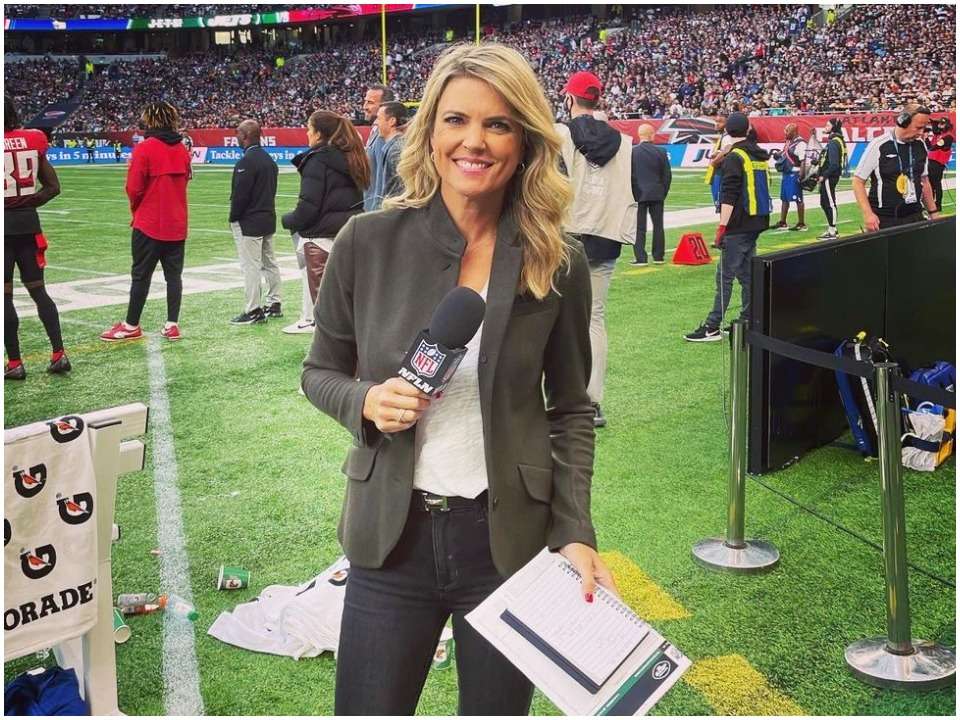 Melissa Stark is an American personality who is working as a sportscaster and television personality by profession. She has worked for three years as a sideline reporter for Monday Night Football. Currently, she is serving her responsibilities towards NFL Network and previously she has worked with NBC, MSNBC, and many more. She was a correspondent for NBC’s “Today Show” and has also covered a wide range of news while working with MSNBC. Before working with MSNBC, she used to work with ESPN and she covered the 2008 Beijing Olympics for MSNBC.

Melissa Stark was born on 11th November 1973 in Baltimore, Maryland. She is 49 years old and has attained her degree in Foreign Affairs and Sp[anish from the University of Virginia. Stark has been an active personality who used to participate in the various committees in college. She was part of Kappa Alpha Theta sorority while in college. Her father’s name is Walter Stark who is an eye surgeon by profession and works at Wilmer Eye Clinic in Baltimore, Maryland. She has spent a part of her life in Baltimore where she completed her graduation from Roland Park Country School before attending the University of Virginia.

Melissa Stark began her career while being a news intern at WMAR-TV in Baltimore in 1991. She has worked on various desk assignments while performing her responsibility as an intern. Later in 1993 and 1994, she got herself interned with CBS Evening News with Dan Rather. Her work with CBS was to write scripts and collect the background information on the various investigative pieces for the line of healthcare for the health correspondent Bob Arnot. Stark has also worked as a reporter and production assistant for Virginia Sports Marketing for the University of Virginia.

Later in 1996, she started her professional life and joined ESPN with the responsibilities of hosting weekly programs like Scholastic Sports America. She has traveled to the United States while covering college and high school sports and creating or engaging the human interest for the same. From 1996 to 2003, Stark began working with ESPN’s SportsCenter and started serving as the regular contributor to Sunday NFL Countdown and Outside the Line- for which she has received an Emmy-Award also. Stark has also worked as SportsCenter on-site host covering the MLB stories and other stories related to golf, NHL, and NCAA Basketball- all for the network.

Later to ESPN, Stark joined ABC Sports back in June 2000, where she performed the responsibilities of sideline reporter for the show Monday Night Football at least for three seasons. She has also worked as a reporter for ABC sports covering figure skating, NFL Pro Bowl, and celebrity gold events. Later to ABC, Stark joined NBC News and worked as National Correspondent for The Today Show. In addition to this, she also used to anchor the programs on MSNBC Live.

She has performed fieldwork for the network and has given her responsibilities to the show NFL Total Access and Around The League Live. As of 2012, she was given the responsibility of hosting the NFL Network gameday which was an on-field show. She also hosted live 2013 NFL regular seasons, pre-game shows, and GameDay Kickoff- designated to her along with other correspondents Shaun O’Hara, Sterling Sharpe, and Brian Billick.

Melissa has not given insights into her life story. She remains tight-lipped when it comes to declaring the story of her husband and children. However, it is for sure that she is married and has been living a moderate lifestyle personally. She is a married woman and has a family including her husband named Mile Lilley, whom she married back in 2001. The pair have together produced four teenage children and the family is together residing in Rumson, New Jersey, USA.

Melissa Stark, who started her career as an intern in 1991 and began launching her career as a regular journalist first with ESPN in 1996, possesses a net worth of not less than $3 million. Despite this, she is a popular personality on social media, having more than 405K followers on Twitter and 25K followers on Instagram. She has developed herself into a prominent journalist who has been showing a consistent rise in the field. She has received many loyal fans on her social media profiles and is consistently thriving her work of journalism with different networks.