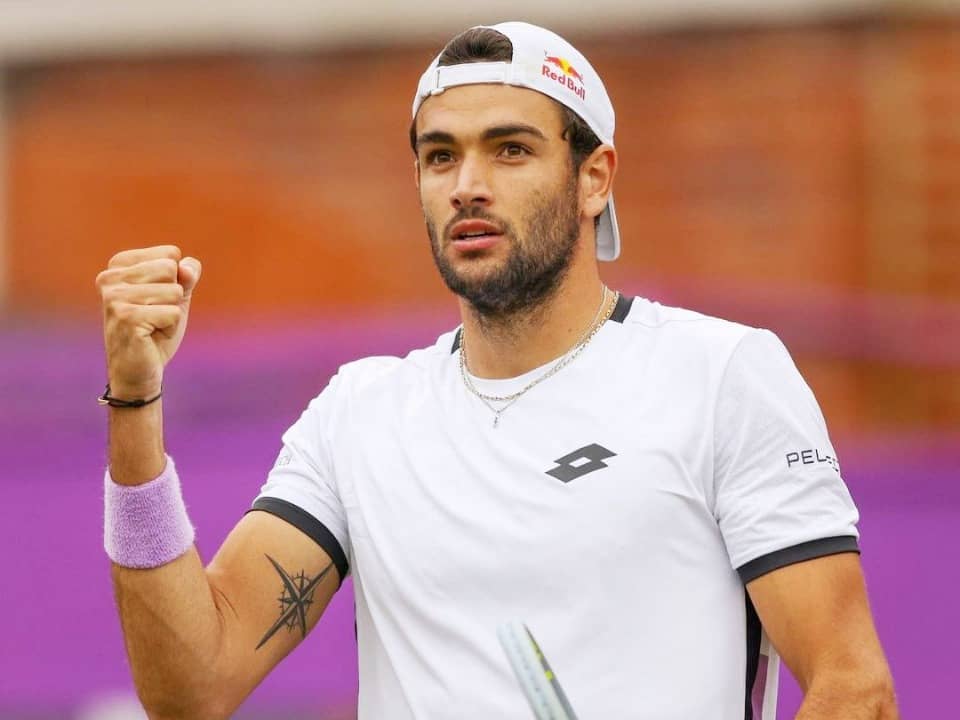 Matteo Berrettini is an Italian professional tennis player and amongst one of the new popular talents in the field of tennis. Matteo turned professional in 2015 after more than five years of playing as an amateur player. In his brief professional career, he has won three singles titles and two doubles crowns.

Matteo Berrettini was born on April 12, 1996, to Luca Berrettini and Claudia Bigo in Rome, Italy. His parents occasionally attend events to see their son, as seen by their presence in his suite at the US Open in 2019. Matteo also has a younger brother Jacopo Berrettini who is also a professional tennis player. Lucia Fogaça, his maternal grandmother, is a Rio de Janeiro native. His paternal grandfather was born in the city of Florence.

Matteo Berrettini’s career took a long time to grow. Junior contests were the beginning where this all started. In each of them, Matteo kept excelling. Even opponents several years his senior were defeated by him. Matteo began his professional tennis career at the age of 21. In 2017, he began competing for ITF titles right away. Victories came quickly after that, and he went on to defeat two Challengers. His first significant break came in 2018 when he won the Swiss Open Gstaad for the first time. In order to do so, he had to beat Spaniard Roberto Bautista Agut in the final. Berrettini won his second ATP title over Filip Krajinovi at the 2019 Hungarian Open.

Berrettini even astonished World number 5 Alexander Zverev in the Italian Open, claiming his first-ever victory over a top-5 player. Matteo Berrettini kept making headlines by winning his third singles title in Stuttgart, beating Félix Auger-Aliassime, a Canadian teenage phenom. Auger-Aliassime was attempting to win his first ATP circuit title at the time. Berrettini didn’t drop a single service game during the tournament, becoming only the sixth man since 1999 to win two championships without dropping serve. Berrettini chose to try his hand at ATP tournaments after such success. He began competing against the tennis court veterans there.

On November 4, 2019, Matteo Berrettini achieved a career-high ATP singles ranking of No. 8. He is now ranked No. 10 in the world. On July 22, 2019, he achieved a career-high ATP doubles ranking of No. 105. On the Grand Slam stage, the Roman has advanced to the Round of 16 at the 2019 Wimbledon Championships. Prior to that, his best Grand Slam performance came in the 2018 French Open (3rd round). Berrettini had a disappointing 2020 season by his own standards. He did not perform well in the major tournaments, but he still finished in the top 10 thanks to the ATP rankings update caused by the COVID-19 pandemic, which safeguarded his 2019 US Open points.

He recently pulled off one of the best performances of her entire career so far in the Wimbledon 2021. Matteo showcased immense strength throughout the whole tournament in order to defeat every player he faced. However, he fell short and couldn’t convert this tournament to the best of his life because he lost in the final. Although, it was not easy at all because he was put up against the best player in the tennis world, Novak Djokovic. In the final, he got off to a great start or we can say dream start because he won the first set quite easily. Out of the best of 5 sets, he could only manage to win one while Novak again showed the whole world why he is the best. Djokovic remained pure dominant in the rest of the match as he won three consecutive sets.

Matteo is dating Ajla Tomljanovic, an Australian tennis player. The two lovers have been together for more than two years. They are very supportive of each other because they come from similar backgrounds and have common ground. They have yet to become engaged and tie the knot. The duo is still in the early stages of their careers and will shortly exchange wedding vows. At each other’s games, the two players are frequently seen cheering on their partners. Ajla, Matyto’s girlfriend, had previously dated fellow Australian tennis player Nick Kyrgios.

The couple finally broke up in 2015 after 2-years of dating. During their partnership, Tomljanovic and Kyrgios were frequently seen together when they had free time. Lotto has sponsored Matteo’s apparel and shoes, while Head has sponsored his rackets. Matteo was appointed as a Peugeot ambassador in July 2019. Colavita, an Italian food company popular for its olive oil, is also sponsoring Matteo. Matteo’s shirt even has the Colavita logo on the sleeve. Matteo’s racquets include Signum Pro strings. Capri Watch, a watchmaker, has been a long-time partner of Matteo’s. In addition, Matteo partnered with Uliveto, a mineral water manufacturing company.

Matteo Berrettini’s net worth is estimated to be more than $5 million. His tennis career earnings through Prize Money Singles & Doubles Combined are stated to be $5,431,649, indicating that he has already made a lot of money in his professional career. Matteo earned $87,000 last season despite numerous events being postponed due to the COVID Pandemic. Berrettini has already earned $338,542 from the ATP Tour in the first two months of 2021. He is still relatively early in his profession and will make a lot more money in the future.