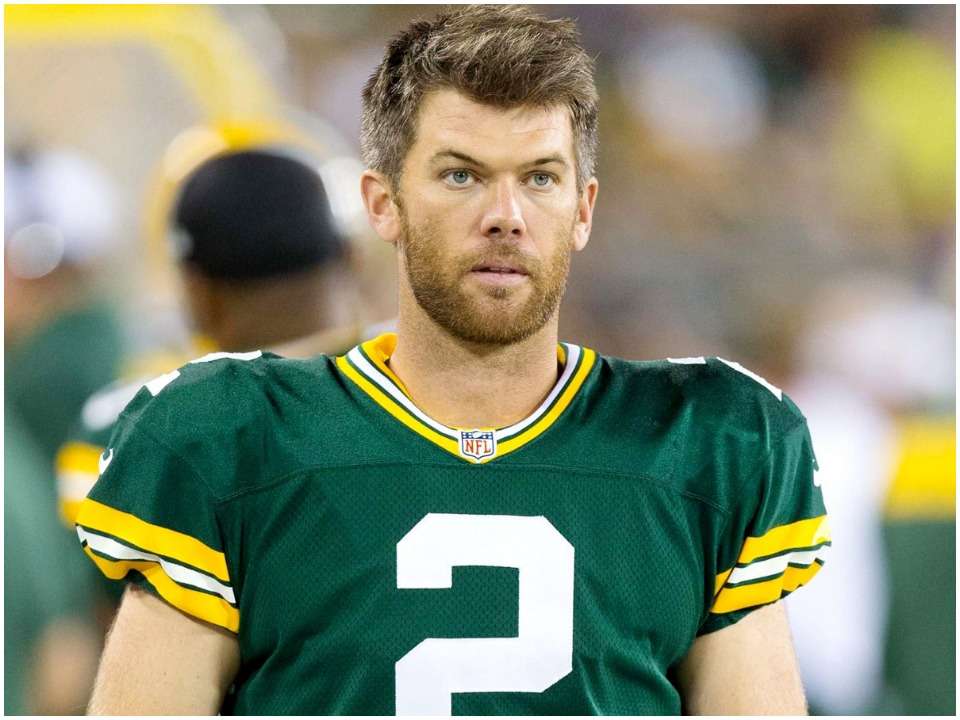 Mason Crosby is an American Football player for the NFL team, Green Bay Packer. His position is placed as a Placekicker. He has a field goal of 355, a Field goal % of 81.6, 460 touchbacks, and 58 Longest Field Goal.  In 2005 he earned a Big 12 Special team’s player of the year. Recently he was seen overcoming the struggles of his team in a match against the Bengals.

Mason Crosby was born on 3rd September 1984 in Lubbock, Texas. The names of his parents are Jim Crosby and Karen Crosby. He also has siblings whose names are Rees Crosby and Ashley Fraser. At a young age, he used to play sports with his family. Mason has completed his high school education at Georgetown High School. He has also attended Werner, Elementary in Fort Collins, Colorado. For his higher and further studies, he went to the University of Colorado Boulder. He graduated with a major in Communication.

Mason began his career playing football professionally. He played on the Colorado Buffalo Football team from 2003-2006. The matches he played at his university were NCAA Division I, Walter Camp Football Foundation, and matches against Miami and Iowa. He became the all-time leading scorer with 308 career points for them. In the 2007 NFL draft, he was chosen by Green Bay Packers in the 6th round and 193rd overall. From 2007 – 2010 he was seen playing in various matches against Philadelphia Eagles, Kansas City, Dallas, Chicago Bear, and many more teams. He also appeared in Super Bowl XLV against the Steelers.

On 27th July 2011, he re-signed Crosby and was seen in matches against Atlanta Falcons, Minnesota Vikings, Oakland Raiders, Denver Broncos, and many more. After three months he set the franchise record where he made a 58-yard field goal in the third quarter as part of a four-field goal game. His season was ended in the Divisional Round against the New York Giants. In 2012 he was seen in most of the season. He played against Chicago Bears, St. Louis Rams, Minnesota Vikings, Tennessee Titans, and more teams. The season was finished with a score of 63.5 field goal percentage. Next year he kicked a season-high five PATs which was against Washington Redskins.

He also played against Minnesota Vikings, Detroit Lions, Dallas Cowboys, New York Giant, and others. This season he tried to franchise single-season records with Ryan Longwell and Chester Marcol. In 2014 he played against New York Jets, Chicago Bears, Seattle Seahawks, New England Patriots, and more games. He scored 1,000th in his 124th career game and also became their fastest player to earn 1,000 points. Next year e broke Ryan Longwell’s team career scoring record of 1,054 with his fourth field goal. He also recorded a forced fumble against the Minnesota Vikings.

From 2016-2020 he played matches against various teams and also earned honors. He was seen against Kansas City Chiefs, Denver Broncos, Minnesota Vikings, Dallas Cowboys, San Francisco, Detroit Lions, and many more. At the beginning of the year, he signed a four-year contract extension with the packers. Some of his matches were postponed due to the covid 19 pandemic. In 2021 he won against the San Francisco 49ers in Week 3. Recently he played a match against Cincinnati Bengals. In the match, he missed three straight field goals which he could have made but ended up winning field goal in overtime to help his team win with a score of 25-22.

Mason is married to Molly Ackerman. The duo was in the same college and met where he was a football player and Molly was a cheerleader. On 28th June 2008, they tied a knot in a private wedding ceremony. They have three children whose names are Nolan James, Charlotte, and Elizabeth.

Mason Crosby has earned a lot by working as a professional NFL player. He has signed a 5-year deal worth $14 million with the packers in 2011. Recently his contract was restructured by converting part of his base salary into a salary bonus and also earned his $1.25 million roster bonus to a signing bonus for three years. According to sources his net worth has been estimated at around $4.7 million.