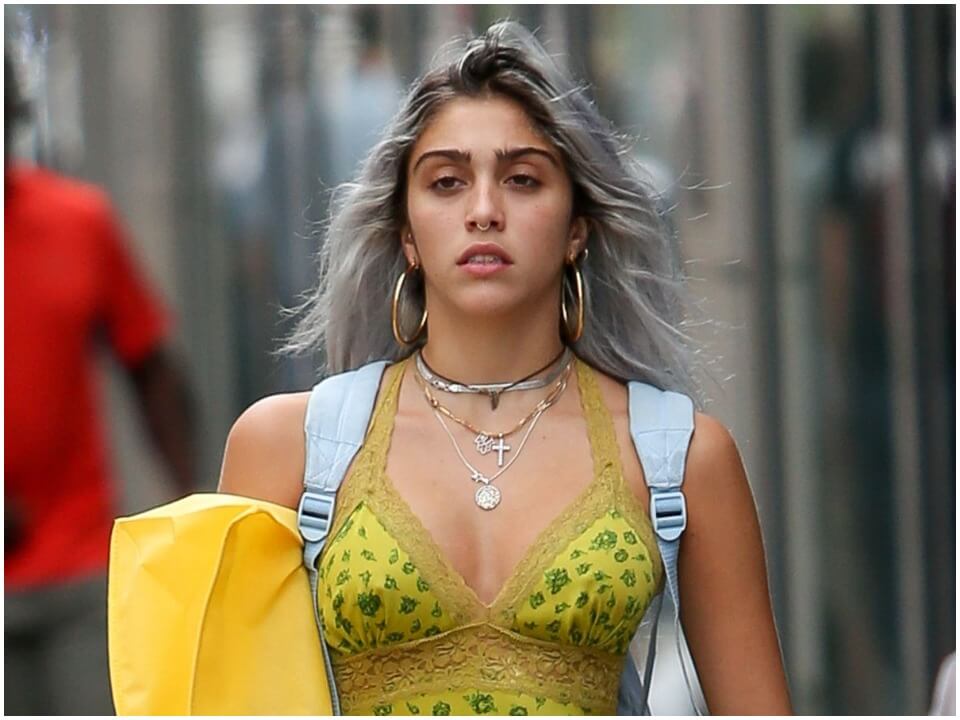 Lourdes Leon is an American actress, model, fashion designer, and director. She is famously known as the daughter of a very popular American singer Madonna. Leon is also known for her work in “A-Z of music”, Madonna celebration: the video collection” and the recent 2021 short film “Brief story”. She alternatively goes by the name of Lola Leon.

Lourdes was born on 14th October 1996 in Los Angeles, California, USA. She is the daughter of famous American singers Madonna Louise Ciccone and Carlos Leon. She belongs to a family of famous people and of mixed ethnicity as she is of descent of Italian, Cuban well as Canadian. Lourdes does not have any siblings but has a half-brother Rocco Ritchie, adopted sister Mercy James and adopted brother David Banda from her mother’s side, and half-brother Meeka Leon from her father’s side. She is granddaughter of Silvio ciccone and Madonna Fortin, niece of Christopher Ciccone , Paula Ciccone, Martin Ciccone, Anthony Ciccone and Melanie Ciccone. She was also the stepdaughter of Guy Ritchie.

Lourdes attended Fiorello H. LaGuardia High School of Music & Art and Performing Arts from where she completed her high school education and graduated in 2014. She then went on to study film and theatre at the University of Michigan at the School of Music, theatre, and Dance in 2014. She graduated with a degree in 2018. Her mother, Madonna always wanted her to attend the college being her alma mater as well. She is fluent in French, Italian, Spanish, and English languages.

Lourdes started her career as an actor in 2009 when she first appeared in “Madonna: celebration” short video as a dancer. She was also featured in “Madonna: celebration – the video collection” as Madonna’s daughter the same year. She later appeared in “A-Z of Music”, a short film while she was at college in 2017. More recently in 2021, she appeared in the short film “Brief story” as Nemesis. She earlier received an offer to be part of the Harry Potter movie franchise but her mother made her focus more on her studies.

Lourdes is also a famous model and fashion designer and she made her debut in modeling with Gypsy sports spring show and was also featured in the music video of I am going to tell you a secret. Lourdes has great taste in fashion which was identified early on by Madonna who took Lourdes to assist with her fashion brand “The material girl” only when she was thirteen years old. At the age of 19, Lourdes joined the ad campaign of Stella Mc Cartney’s new perfume line “pop” as a model alongside Kenya Kinski-Jones, Amandla Stenberg, and Grimes.

She has also tried her hands in direction and has various uncredited work under her name. Lourdes was an additional crew in 2020 for Adidas Autumn winter special campaign with Stella McCartney. She is currently managed by CAA fashion and has been part of various campaigns and has endorsed various brands. She was recently seen on the cover of Vanity Fair Magazine.

Lourdes has always been public about her relationships and has been known for being in a relationship with actor Timothee Chalamet for a while. Timothee is French and studies in the same high school as Lourdes. They started dating back in high school but broke up in 2014 after Timotee was caught with another girl. Later there were rumors of Lourdes dating a skateboarder named Jonathan Puglia in 2017.

Lourdes is active on social media but has kept her profile professional. She has very few posts on her Instagram account all of which are from her photoshoots from various modeling projects. Leon currently has 120k followers on Instagram. She does not have an official Twitter account and is also not on Facebook.

Lourdes has been a successful model and has earned a lot of wealth through her projects. She has also been part of acting projects which also sourced her income. She is able to make $100k annually through modeling and acting. Her estimated net worth as of 2020 is around $5million. She also enjoys wealth from her famous parents who have an even larger net worth