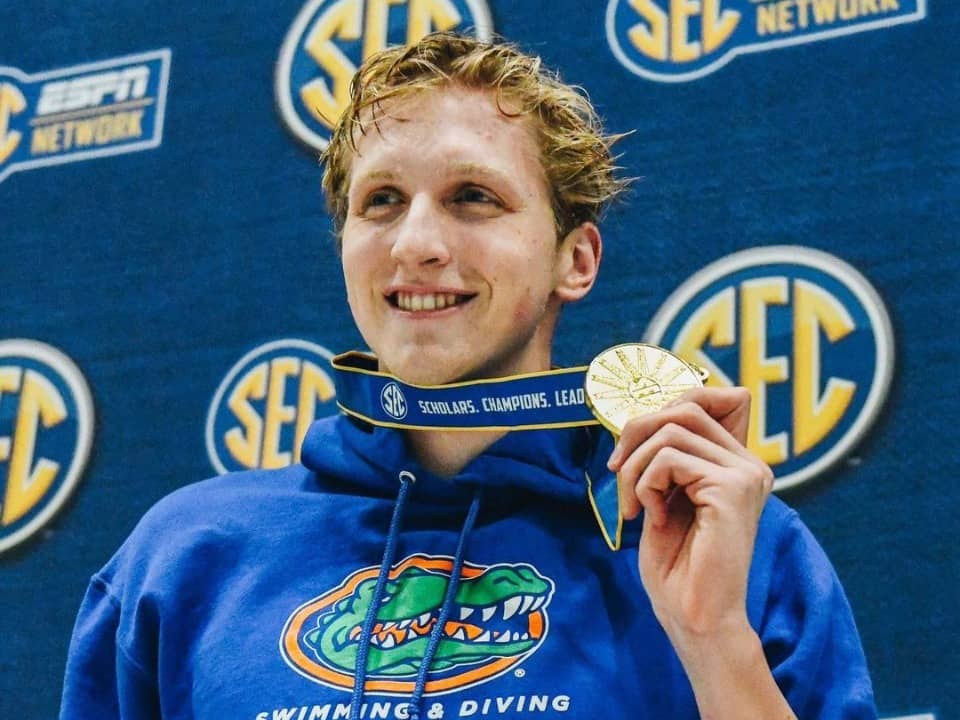 Kieran Smith is an American professional swimmer who specializes in freestyle and Medley swimming. He swims for the University of Florida and is also a part of the US national team. Recently he qualified for the 2020 Tokyo Olympics in the US trials and is now representing the country in 400m and 200m freestyle events.

Kieran was born on 5th December 2000 in Ridgefield, Connecticut, and is currently 20 years old. He is known to have a brother named Greyson Smith but much has not been shared about him either. He grew up in Ridgefield and has always loved swimming since he was a kid. Kieran has completed his high school education at Ridgefield high school and graduated in the year 2018. He went on to join the University of Florida to pursue higher studies and collegiate swimming.

Kieran started his swimming career in high school where he was part of his school team and also a part of the Ridgefield aquatic club and became NISCA All-American twice in a row. By 2017, he became a part of the US National Junior team and started entering various world Junior championships. He won a silver medal in the 200m event in the World Junior championship in 2017. By the end of his high school, he was ranked as number 8 among the NCAA recruits and he verbally committed to the University of Florida. At the University, he joined the college team Gators. He started participating in the SEC competitions and in 2018, he finished at the 2nd position in the 200m freestyle event.

In 2021, he competed in the US Open Water Championships where he finished at the 7th position, and in the TYR Pro Swim series, he ended up as a champion and stood first in 200m Freestyle. The same year, he also competed at the US national Olympic trials and successfully qualified to enter the US national swimming team. He is currently a representative of the USA in the 400m freestyle event. His first ever competition at the Olympics was recently on July 24th, 2021 where he successfully secured 3rd position and won a Bronze medal for the country.

Kieran is currently in a relationship with Julia Restivo whom he met during high school and has been dating since 2017. Much has not been shared about their relationship as they like to keep their dating life private but it is known that the two are currently in a long-distance relationship. Kieran has often shared about how much he loves traveling and his favorite city to ever visit was Italy. He is really close to his family and is currently settled in Connecticut.

Kieran has been a swimmer for several years and has recently turned professional and a part of the US national team and thus earns a lot of wealth. His estimated net worth as of 2021 is estimated to be around $1.3million.

Kieran is known to be one of the most talented members of the US national team who holds several national records and titles. He is known to give his best in every championship and event and also strives to do better every time. He is highly affectionate with his family and girlfriend and is grateful for all the support and guidance he receives. His passion for swimming and has helped him reach the Olympics where he performed his magic and secured a Bronze for the country in his debut season itself. He is a promising candidate from the USA and has many more opportunities to showcase his talent in the future and we are looking forward to it.