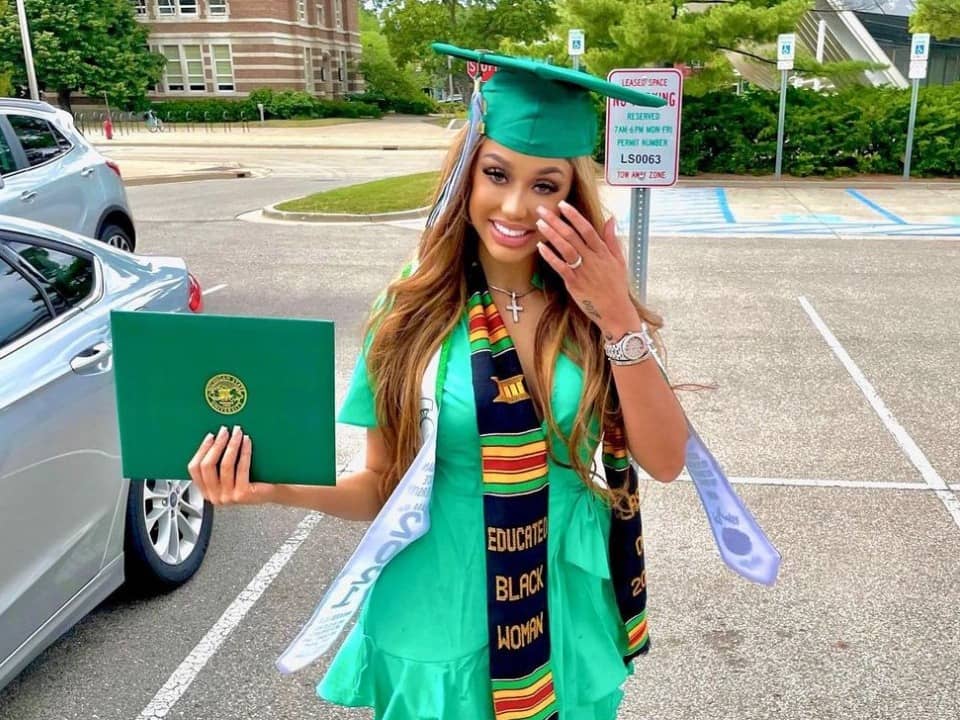 Kalabrya Gondrezick-Haskins is a Cosmetic Laser technician, former Michigan State University Basketball player, pageant holder, and famously known as the wife of football player Dwayne Haskins. She is currently getting all negative attention after her husband accused her of domestic violence.

Kalabrya was born on 18th Dec 1995 and is currently 26 years old. she was born to her parents Lisa Harvey Gondrezick and Grant Gondrezick. Her mother is a basketball coach while her father was a professional basketball player. Her father recently passed away in January 2021. She is known to have two siblings a sister named Kysre and a brother named Grant who are also basketball players.

Kalabrya completed her high school graduation from Benton High School where she was also part of the school basketball team. She later went on to attend Michigan State University from where she graduated with a BA in interdisciplinary studies with a minor in innovative studies in 2019. She then went on to attain Cosmetic laser certification from National Laser Institute in 2019 and also obtained her Esthetician license from Douglas J Aveda Institute.

Kalabrya started her career in high school where she played in the school team and by the end of her senior year, she was ranked as no 36th recruit in the country by Blue star basketball. she also led her team to win the 2014-15 district title. She then went on to play in the Michigan State University team and maintained a great record during her freshman year in 2015-16. She also played in the Women’s Basketball team roster in the 2015-16 season. however, she did not pursue basketball further.

The same year, she also tried her luck in pageants and went on to participate in various pageants. She became a finalist for Michigan’s Miss Basketball Award in 2015. Kalabrya was named Miss Blossomtime and Miss Benton Harbour. She is currently working as a licensed esthetician and cosmetic laser technician at Swee Samba Spa in Atlanta. She also is s social media personality and works in laser ad skin treatments.

Kalabrya was recently accused in a domestic violence case against her husband and was arrested from his room in Cosmopolitan hotel in Las Vegas. On July 3rd, her husband had to be rushed to the hospital due to a facial injury that occurred due to she pushed him. Dwyane’s lips were cut open and he also lost a tooth. She is currently on bail and is going to face trial in August.

Kalabrya is currently married to Dwayne Haskins, a 24-year-old football player for the Pittsburgh Steelers team. They had been dating for a year and a half and recently got married in March 20201. They have also recently posted pictures of Dwayne proposing to Kalabrya with a diamond ring in July. The two are currently under a domestic violence dispute as Dwayne accused Kalabrya of hitting him. She is currently settled in Las Vegas. Kalabrya currently has 12.3k followers on her Instagram account. She is not known to be on Twitter but has a Facebook profile with around 100 friends.

Kalabrya earns a lot through her profession as a cosmetic laser technician and esthetician and has accumulated a lot of wealth in a few years. her net worth as of 2021 is estimated to be around $3million.

Kalabrya is a highly talented and beautiful young lady who has multiple talents ranging from sports to modeling to cosmetic treatments. She leads a luxurious lifestyle with a lot of travel and spends her time with her pets. She has achieved a lot in such a short while and chose a different path from her family. Although she is currently facing legal issues due to her actions, she is believed to overcome them soon.