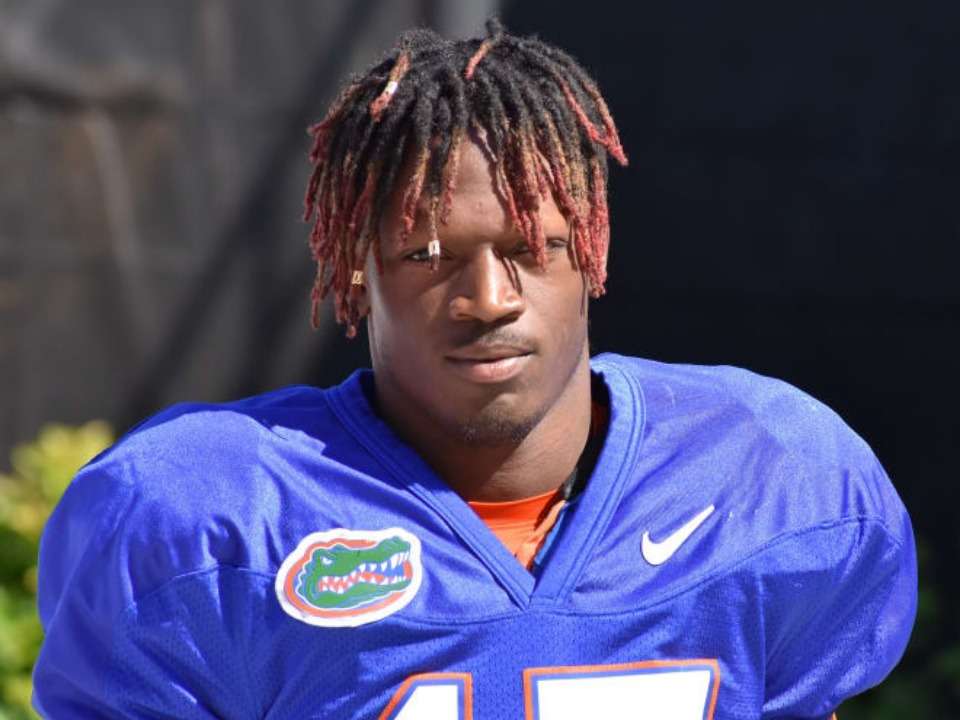 Kadarius Toney is an American football wide receiver who plays for the New York Giants and has played college football for the Florida Gators. He was drafted in the 2021 NFL draft and was selected by the Giants in round 1, overall pick 20.

Kadarius Toney was born on January 27, 1999, in Mobile, Alabama to mother Angela Williams and father Dana Toney. His mother, Angela went into labor while they were attending a game in 1999, and Dana just laughed it saying he was destined for it. His father is a Navy veteran and has a sister named Jillian Toney and two brothers who followed their fathers’ footsteps into the military. Kadarius was also going to join the Marines but decided to choose football instead. He grew up with his siblings played all sorts of sport.

Toney attended Mattie Thomas Blount High School in Eight Mile, Alabama where he was the starting quarterback for the last 2 years of his school career as a dual-threat quarterback. Then close to his senior year in high school, he was thinking of joining the Marines but after a conversation with his father, he decided to pursue football while studying criminal justice. Due to this outstanding high school career, he received scholarship offers from South Carolina, Georgia Tech, South Alabama, Alabama, and Florida but ended up graduating from the University of Florida

Toney started his career as a football player back while he was attending high school, he played as a dual-threat quarterback for the last two years of his schooling. As a junior, Karadius threw for 3604 yards while rushing for 896 and 53 touchdowns, and as a senior, he threw for 2984 yards while rushing for 894 yards and having 47 touchdowns including 32 passing and 15 rushings.

Toney made it to the 2016 AL.com Super All-State Team where he was named Offensive MVP of the 2016 AL.com All-Coastal Alabama team. Subsequently, he also played in the Alabama-Mississippi All-Star Classic. He finished off with his high school career with a 20-5 record and enrolled himself in the University of Florida playing for the Florida Gators.

Karadius was ranked as the 421st best recruit in the country, 25th best ATH, and the 20th best recruit from the state of Alabama by 247Sports but in the senior season he dropped out of the 2020 Cotton Bowl Classic to prepare for the 2021 NFL Draft and soon in 2021 Toney was drafted by the New York Giants of the National Football League in round 1. He finished his career by playing 38 games while recording 2641 yards and helped Florida to become the only team in the nation with three players with at least eight touchdown receptions.

There are no details regarding his upcoming projects, mostly likely Toney will continue with his football journey playing for New York Giants.

At the moment, not much information is available on Kadarius’s personal life but it seems like he has been in a relationship with 24-year-old Charnesia Lumpkin. They both know each other because of music as Toney is a rapper who goes by the name Yung Joka. When his childhood friend Ja’Christopher died in a car accident in 2018, he started to focus more on music. Toney felt like he lost his right hand and sometimes he close the door and wrote music for two, three or even four hours.

There are no accurate reports of Kadarius’s net worth or salary as it has not been published. But the average salary of an NFL player is $860,000 US Dollars and a rookie has a minimum salary of $435,000 US Dollars.