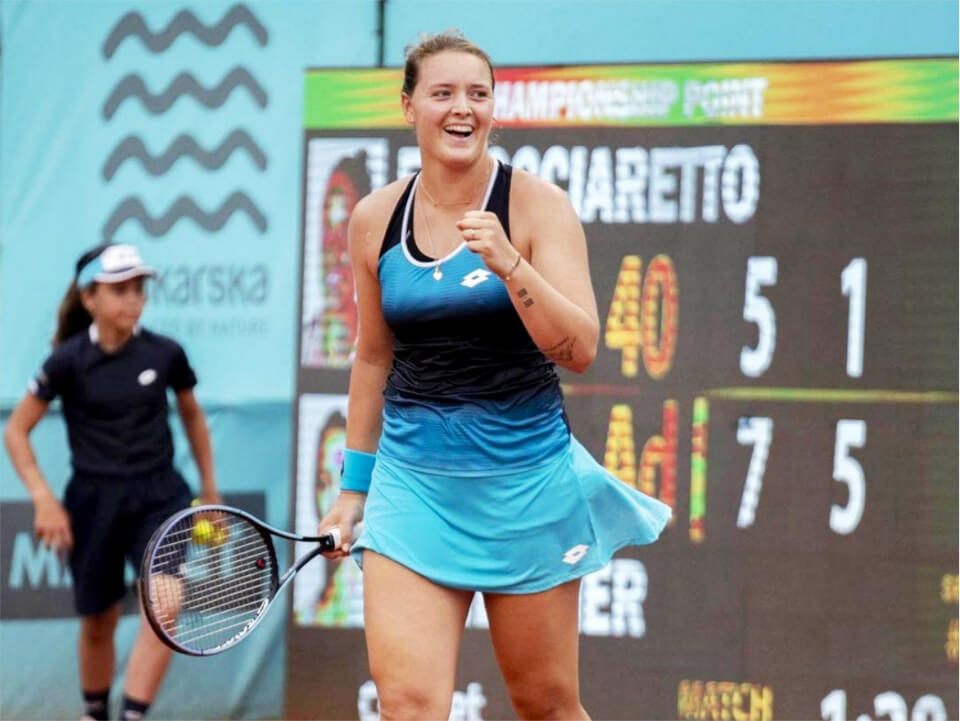 Jule Niemeier is a 22 years old young and dynamic German personality. She is famously involved and known for her tennis profession and is most recently appearing for 2022 Wimbledon matches. Jule has achieved the career-high WTA Singles Ranking with the world No. 94, achieved on 9th May 2022.

Jule Niemeier was born on 12th August 1999 in Dortmund, Germany. Jule’s game has changed drastically in the ongoing Wimbledon 2022 as she is in outstanding form and climbed all the way up to the quarter-final. She would be facing Tatjana Maria today and hoping to secure her place in the semi-final of Wimbledon 2022.

2021: Appearance at Two WTA semifinals, and debut with the World ranking No. 150

At the beginning of 2021, Jule reached two semi-finals. One was her appearance at Clay in May at the Internationaux de Strasbourg, where she appeared as the qualifier and later lost the game to another champion Barbora Krejčíková. Then, in July same year, she had another performance at Hamburg European Open, where she appeared as a wildcard entry and eventually lost the game to Andrea Petkovic. Summing up the results of all the games played in the season, she entered the top 150 at World No. 140 on 12th July 2021. She also qualified for her Grand Slam debut at Wimbledon and reached the third round but lost the game to another champion, Lesley Pattinama Kerkhove.

In the year 2022, she appeared for the French Open and qualified for her Grand Slam main draw debut. During her appearance at the 2022 Makarska International Championships, she won her first WTA 125 Challenger Title. She had the main draw debut at the Wimbledon Championship and reached her first Grand Slam Quarterfinals after defeating other champions like Wang Xiyu, Anett Kontaveit [pushed the 2nd seed personality in tennis], Lesia Tsurenko, and Heather Watson. It was her first straight victory against the top-10 player Kontaveit in the straight set.

Jule Niemeier, who is representing Germany, reached the Grand Slam quarter-final after defeating the opposition Heather Watson at 2022 Wimbledon. She claimed the winning streak with a straight-set of scores like 6-2, 6-4 and achieved the world number 97, after getting qualified for the stage in the second major main draw. She earlier stunned everyone with her performance when she defeated second seed Anett Kontaveit, and later entered the next round with her German fellow Tatjana Maria. Niemeier defeated Kontaveit in just 58 minutes and it marked her first win against a top-10 player, which is one of her biggest achievements in her career.

As per her overall performance in the WTA, she has reached the previous three matches against the top 20 players and went to three sets. As per Opta, Niemeier is now ranked as the fourth-youngest woman from Germany to be qualified for the quarter-finals at Wimbledon in the Open Era. She has made history and got her name embedded in history after the names of other achievers like Bettina Bunge, Steffi Graf, and Sabine Lisicki on the list.

Jule Niemeier is not committed to anyone in the industry. For now, there is no information on her past romantic relationship. Seeing her Instagram profile with her real and full name with a verified tick, it seems she is very close to her friends and family. She has captured most of her pictures on her social media while being available at her tennis court. Among the various pictures of her tennis court, she has posted one picture of three small boys with the caption “The Most Precious Gift”. It seems as if someone in her family has become a parent, and she had to show her happiness by uploading a picture of three kids.

It is for sure that 23 years old Jule Niemeier is earning a good income because of her only profession of tennis. She is most recently involved in the performance of the 2022 Wimbledon. As per the sources, she has gathered the maximum prize money of $343,672. Surely, she must be having her connection with various sponsorship dealers, agents, and commercials. For the moment, her estimated net worth is somewhere around $2-3 million, which is enough to give her a name and fame in the industry.