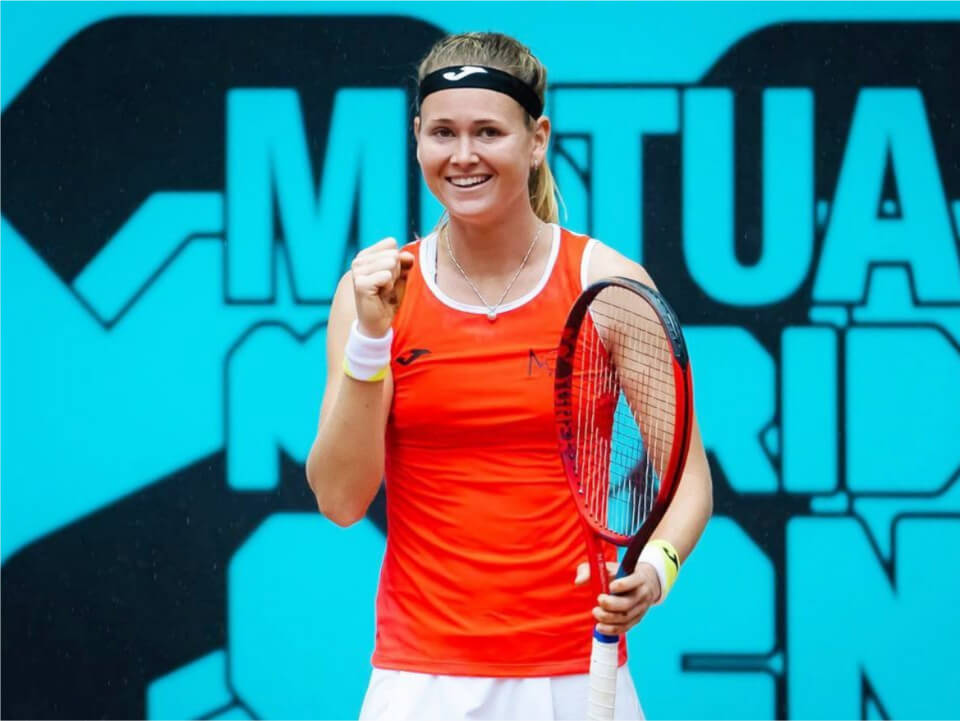 Marie Bouzkova is a Czech personality famously known for being a tennis player who has achieved the career-high ranking of number 46. On 9th May 2022, she peaked at the high ranking of No. 24 in the WTA doubles. She has won 3 doubles titles on the WTA Tour and has also shown her appearance at ITF Women’s Circuit where she won 12 singles titles and 3 double titles. She appeared and won the US Open Girl’s single title game while defeating and pushing hard Anhelina Kalinina in the final.

Maria made her debut with the WTA Tour back in 2015 at the 2015 Abierto Mexicano Telcel, where she lost the final round. While playing at the 2019 Rogers Cup, she rose to prominence after she appeared in the semi-finals and lately failed or was defeated by Serena Williams. But the game made her achieve good public attention as she pushed the former world no. 1 to three sets and won the first set 6-1.

Marie Bouzkova is 24 years old because of her birth in 1998. She was born to her father Milan and mother Květa in Prague and shared her childhood with her younger brother named Benjamin Milan. She started playing tennis at a club that was owned by her parents in Prague. Later, she moved to Florida at the age of 10, where she got herself trained at Bollettieri Academy for two years, and then started working with her dad and then began with Christian Requeni in 2014. She is admired for the games and the playing passion of other tennis players like Serena Williams and Rafael Nadal. Most recently, she is pursuing her education in business administration through Indiana University East. Besides her mother tongue of Czech language, she is a fluent speaker of English, Spanish and German.

Marie Bouzková began her season in 2019 with an appearance in the game Brisbane International where she played in qualifying and qualified for the main draw. She entered the qualifying round and faced the main game during which she stood against Samantha Stosur and won against her but was dropped down in the next round by Karolína Plíšková. She then entered the Australian Open, where she failed to qualify and lost the first round to compatriot Barbora Krejčíková. Maria participated in two competitions namely Indian Wells Open and Miami Open and failed to pass the qualifying rounds for both. Covering the whole efforts of the season and her ups and downs during the year, she reached the top 100 and finished the year ranking No. 57.

After the COVID-19 pandemic outbreak, she succeeded in passing the first tournament when she reached the quarterfinals but lost the eventual championship to Jennifer Brady. She appeared to taste success after reaching the third round at the Cincinnati Open but eventually lost the round to Anett Kontaveit. On 31st August, Marie reached the new career-high singles ranking at No. 46.

Marie appeared in the WTA Tournament and won the maiden title in doubles at the Birmingham Classic while partnering with Lucie Hradecká, with whom she defeated the pair of Ons Jabeur and Ellen Perez in a tight three-set match. Thereafter, she won another match at Pague Open, where she reached her second trophy sharing with Hradecká.

Marie Bouzková had a record-making major win at the 2022 Australian Open over the qualifier Rebecca Marino. She appeared in French Open 2022 and reached the second round in singles for the first time in her career but she had to later withdraw herself from her singles match with Elise Mertens and also from her doubles match because of the COVID-19 restrictions. In 2022, she also appeared in Wimbledon Championships where she defeated Caroline Garcia and reached the Grand Slam quarterfinals in her career.

Marie Bouzkova is committed to her career and possesses no past story of her romantic relationships with anyone in the industry. For the moment, she is known to be single and is pursuing an unmarried lifestyle.

On 9th May 2022, Marie Bouzková reached the career-high ranking of No. 24 and is most recently known to be maintaining her position at No. 32 as of June 2022 [both in doubles]. She has reached 12 ITF singles career titles, 3 WTA doubles titles, and 3 ITF doubles titles. It is for sure that she must be earning a good amount of money because she must be collaborating with various sponsorships, commercials, and other agents in the industry. Also, she must be getting good leads because of her ranking worldwide. She is known to have a career net worth of around $2 million.