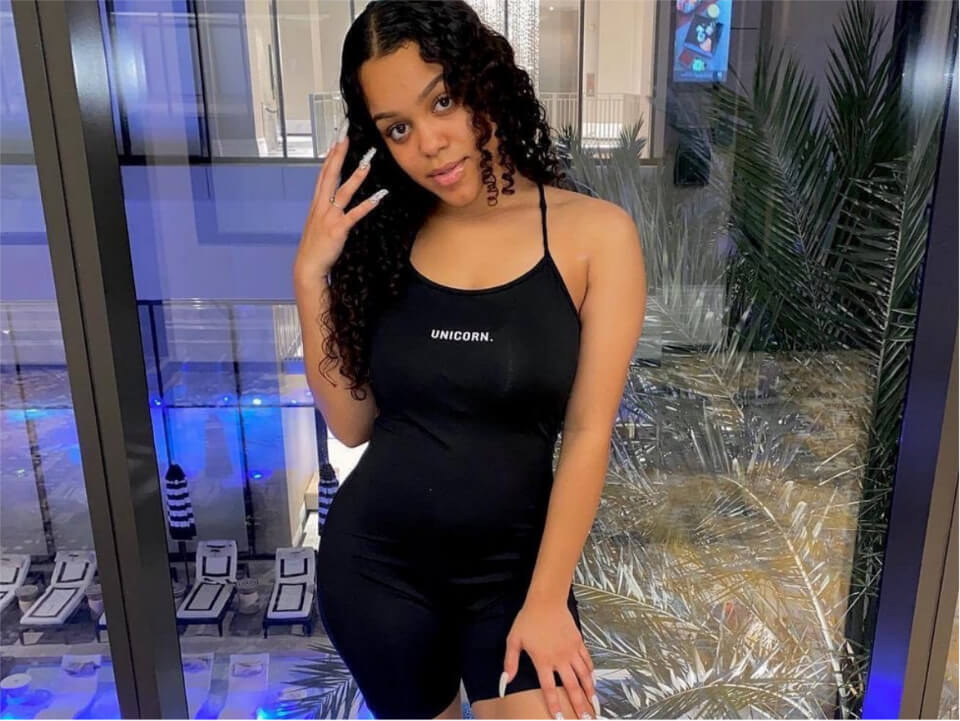 Jazlyn Mychelle is a 21 years old YouTuber and influencer famously known for being committed to the NBA YoungBoy. By profession, she is known to be a YouTuber who shares her vlogs, beauty and lifestyle-based videos, and many other contents with her fans. The NBA YoungBoy and she has been dating for a long time, and the two already have one child, a daughter.

Jazlyn Mychelle was born in February 2002, making her 21 years old as of 2023. She was born in Houston, Texas, where she completed her schooling (names not released) and shared her childhood with her four sisters and two brothers. Jazlyn is known to be the youngest of all her siblings. Back in the past, one of Jazlyn’s sisters clashed with Jania Meshell, featuring the NBA YoungBoy and his son, Kacey Alexander. For those who do not know, let us tell you that Jania Meshell was previously connected with NBA YoungBoy romantically, and the two have shared a baby.

As per various sources, it said that she shares her beauty and lifestyle vlogs on her self-titled YouTube channel also. She also features cooking-related content, shopping hauls, and videos on her YouTube channel. Many of her videos she has got more than one million views.

Jazlyn created her self-titled YouTube channel on 3rd January 2015. As of 2022, she has more than 40 thousand subscribers and 873K views on her channel. Not only this, but the YouTuber also posts her content on TikTok, where she posts dance clips (sometimes with her boyfriend), Lip-Syncs, and comedy clips.

The YouTuber lives in Los Angeles, California, United States, and is a known online content creator who has somehow left her youtube content and skills in the past. This is because she now remains quiet about her professional life. Also, she is known to be one of the NBA YoungBoy’s baby mamas.

In September 2022, it was rumored that Jazlyn was pregnant with the baby of NBA YounBoy. This is because the rapper uploaded an Instagram carousel, showing himself with the child in his hands and the last slide of the pictures showing the baby bump with a large diamond ring. It was rumored that Jazlyn was the girl with whom the rapper was going to have a baby and the engagement. The two already share a child- a daughter named Alice, born in 2021. The rapper is known to have at least ten children from seven different girlfriends.

In February 2022, rumors sparked that the rapper had bought a 30ct diamond engagement ring for his girlfriend, Jazlyn. This was because of the evidence of Instagram pictures showing the baby bump and the diamond ring in hand cuddling the baby bump. This suggested that the rapper had kneed down and had proposed to the girlfriend. Then, on 28th September 2022, a son was born out of Jazlyn, and it was confirmed or believed that she shares the boy with her long-time boyfriend and partner, the NBA YoungBoy.

On Sunday (8th January 2023), one of the Instagram users, AriTeaTalk, posted a screenshot of a marriage license dated 7th January (Saturday). The certificate listed the two known names – Jazlyn Mychelle Hayes as Spouse 1 and the rapper, born Kentrell Gaulden, as Spouse 2. Considering the information and the certificate, it is believed that the two (Jazlyn Mychelle and the rapper NBA YoungBoy) got married secretly.

But, none of the two has posted anything regarding this on social media at the time of writing and the posting of the marriage certificate. Also, considering that NBA YoungBoy does not currently have an active Instagram presence, the YouTuber Jazlyn hardly connects to anyone now on her social media channels. It is unlikely to say or confirm the news.

Jazlyn is semi-active on Instagram, with nearly 20K followers. Sometimes, she shares images of her daughter Alice. You can catch her on the Instagram handle – @jazzmychelle.

Jazlyn Mychelle is indeed earning well, but she has yet to give any detail regarding her professional and school life. We wonder if she earns herself or depends on her parents or the NBA YoungBoy for her livelihood.