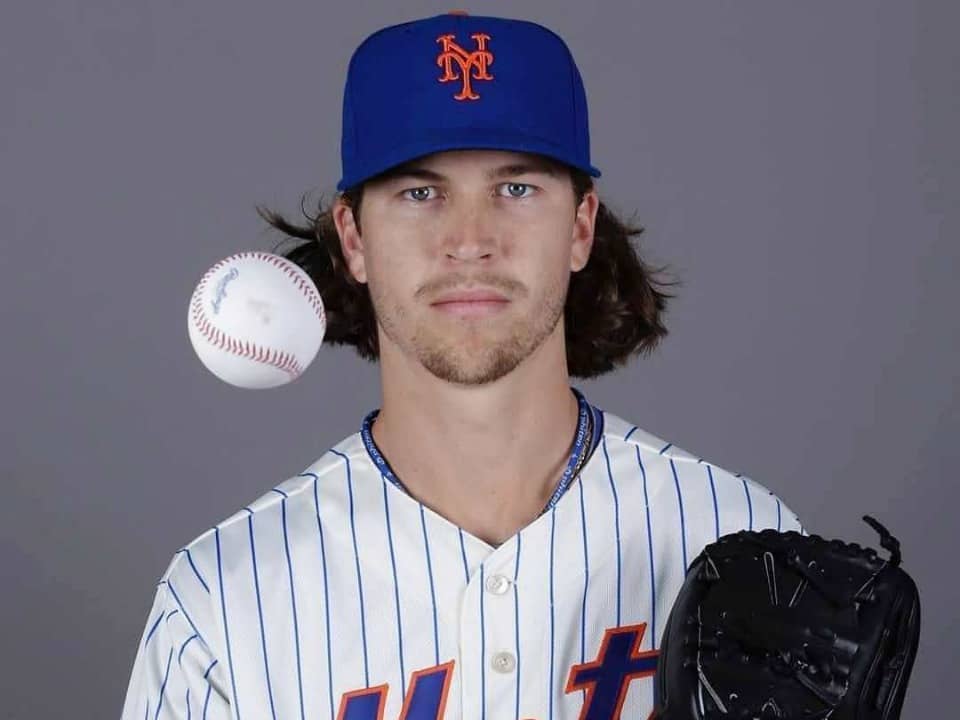 Jacob deGrom whose real name is Jacob Anthony degrom is a 33-year-old American professional baseball pitcher for the New York Mets of Major League Baseball (MLB). Jacob deGrom has established himself as one of the best pitchers currently who made an entry in MLB at an age of 26. He is best known for winning the National League Cy Young Award. Moreover, he has been ranked the top starting pitcher in baseball by MLB Networks.

Jacob deGrom was born and raised by his parents in DeLand in Florida state of united states of America, which in turn proves his nationality to be America. He was born to Mr.Tony, an AT&T lineman, and Mrs.Tammy, a customer service representative for a credit card rewards program. He was born in June of 1988, and he celebrates his birthday every year on the 19th of June. Jacob has 2 siblings namely Sarah Meeks and Jessica fender. Apart from playing baseball, he loves hunting and fishing, which clarifies that he loves to be in the lap of nature.

He cleared his schooling years including, freshman and sophomore at Calvary Christian Academy. Further, he went to Stetson University in Florida. Where he started playing baseball for Stetson hatters(2008-2009). Moreover, he started growing his hair as a result of which a hashtag #hairwego went on trending. He also achieved the internet baseball award,2014 national league Rookie of the year.

DeGrom began playing baseball as a shortstop and was converted into a pitcher during his junior year at Stetson. The Mets selected him in the ninth round of the 2010 MLB Draft, and he made his MLB debut with the Mets on May 15, 2014. That year, deGrom was named the National League’s (NL) Rookie of the month twice, and the NL rookie of the year. In 2015, 2018, and 2019 deGrom was selected as an MLB All-star. In 2018, deGrom was the NL Era leader and won the Cy Young award. He led the NL in strikeouts and won the Cy Young Award for the second year in a row.

In 2020, he again led the NL in strikeouts. DeGrom is widely regarded as the best current pitcher in baseball, and one of the best current players overall. In 2019, The New York post named deGrom the best professional athlete in New York City during the 2010s. The Mets promoted deGrom to the major leagues on May 12, 2014, after Gonzalez German was placed on the disabled list.DeGrom and Clayton Kershaw of the Los Angeles Dodgers were selected as NL Co-Players of the Week for the week ending June 7, 2015. On April 23, 2021, in a start against the Washington nationals, deGrom set an MLB record for most strikeouts in the first four starts of a season with 50.

JACOB DEGRM does not use Instagram, however, there’s a fan page of him is there with (@jacob.degrom) which posts actively about Jacob. It has a follower count of 34.7K. However, the same does not apply for the Twitter(@jdegrom19) he tweets regularly, although the follower count is negligible, that is just 122. Considering all this, it can be concluded that he is not active on social media.

Jacob degrom was married to Stacey Harris in 2014, no controversies related to their relationship could be tracked on the web, which means they both are doing good in the relationship. They first met at a bull-riding event through their mutual friends. They were married on 8 November 2014. According to the NEW YORK TIMES, the marriage happened under a cover of oak trees, and therefore the reception was held during a rustic barn. They both are blessed with 2 kids, a son, Jaxon, in April 2016. Their second child, a daughter named Aniston, was born in February 2018.

His net worth is really huge, it accounts for $25Million. As of 2021, his salary is $7Million. There aren’t many sources from where he makes money, the main sources include his salary, cash prizes from tournaments, and the financial aid he receives from the team owners.