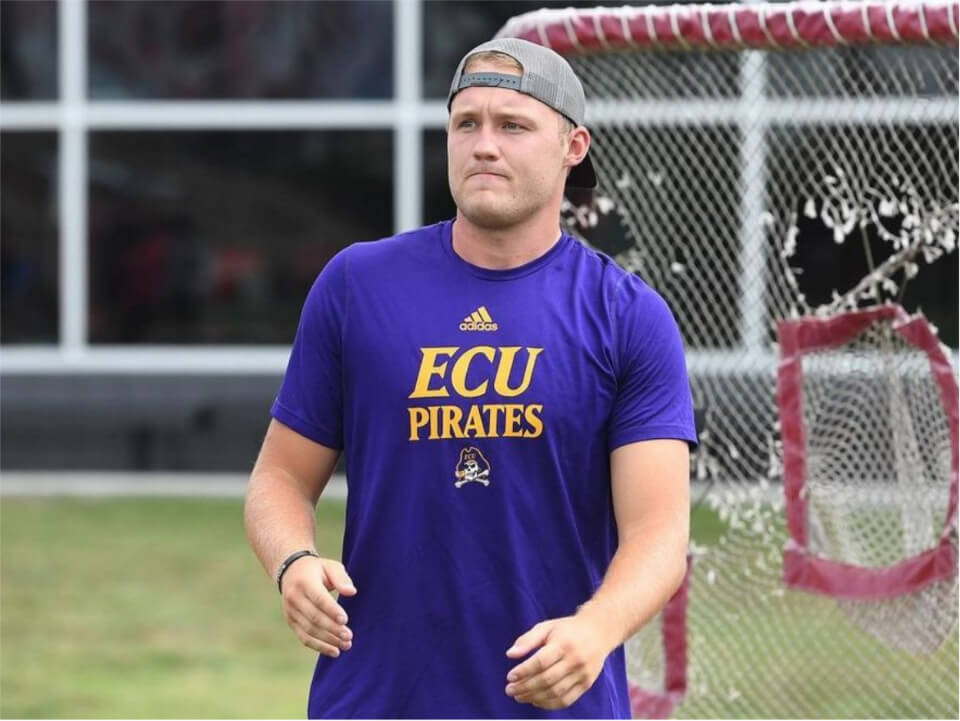 Holton Ahlers is a well-reputable left-handed player; his full name is Holton Maddux Ahlers. He has been known as the face of ECU football for the last five years. He has set seven school career records and five conference career marks over five seasons with ECU football. In December 2022, he celebrated his senior day after returning Pirates program to bowl quality.

Holton Ahlers was born on 10th November 1999, making him 23 years old as of 2022. His father’s name is Morgan Ahlers, and his mother is Jill Ahlers. He grew up in Greenville, North Carolina, with his three elder brothers, Griff Ahlers, Peyton Ahlers, and Jordan Ahlers.

He went for studies to his hometown, D.H. Conley High School, Greenville, NC, and graduated in 2018. Later, he enrolled at East Carolina University (ECU) for higher studies. He earned a bachelor’s degree in communication in 2021 and was also featured in the list of academic excellence.

Holton started his football career while studying at high school. He participated and became a three-year all-conference (first-team) selection and two-time conference player of the year. According to North Carolina High School Athletic Association (NCHSAA), he stood third in touchdowns responsible for (201) and pass TDs (145) while ranking fifth in pass completions (670) and sixth in pass attempts (1,157). He was a team captain who led D.H. Conley and was selected as the 252 ESPN Radio Player-of-the-Year 2017.

He officially committed to ECU on 30th January 2017 and participated with the Pirates in spring drills and earned “Top Offensive Newcomer” honors after spring workouts after completing a combined 22-of-36 passes (61.1 percent) for 302 yards and one TD during two scrimmages. He made five starts as a true freshman and stood 11th nationally in yards per completion (14.1), passing yards per game (178.5), and passing efficiency (118.08). On 19th November 2018, he was selected as the AAC (All-Academic Team selection) Offensive Player-of-the-Week.

In 2020, he ranked among the nation’s Top 30 in three aerial categories – 25th in passing TDs, 26th in completions per game (20.6), and 30th in passing yards per game (240.1). He rushed for 109 yards and a score on 54 carries and was selected for the Manning Award and 2020 Wuerffel Trophy Watch Lists. He was a 2020 Preseason All-American Athletic Conference selection by Athlon sports.

On the football field, he had broken bones and torn muscles, but he gave an excellent performance. According to Holton Ahlers’s coach, Mike Houston, “Holton is the one that brought in the football program to change it, and we bought into it.”

Holton is the founder of 𝐁𝐖𝐁, a Clothing Brand (Instagram page @builtwhenbroken). In 2017, his best friend passed away unexpectedly at 21, so he founded a brand that is Built When Broken, reminding people of where they come from and where they are going.

Holton Ahlers is not a married man. In the past, he has been dating his college-friend named Grace Carmichael. Both were first seen together on Grace’s Instagram on 3rd April 2022. His girlfriend, Grace Carmichael, is also a student at East Carolina University.

He is a well-reputable athlete set for NFL Draft in 2023. He is also the founder of 𝐁𝐖𝐁, a Clothing Brand, since 2017. It is safe to say that Holton Ahlers estimated net worth around to be $ 2 Million.