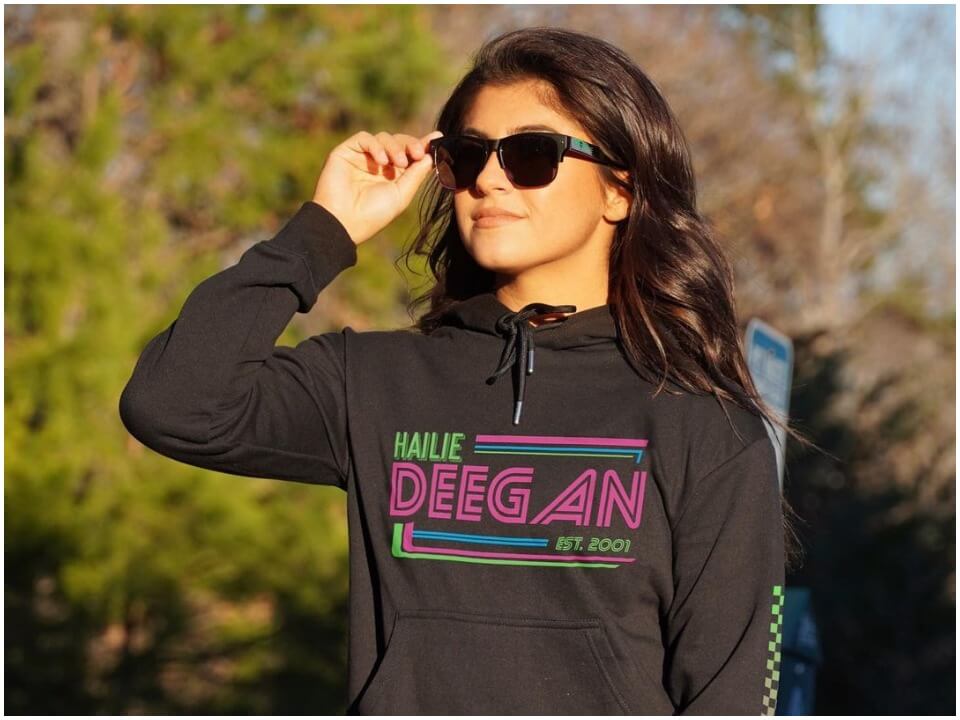 Hailie Deegan is a young, talented and beautiful American Stock Car racing driver. Her matches are known for racing full-time in ARCA Menards Series for DGR Crosley and NASCAR Camping World Truck Series for David Gilliland Racing. She was a Modified Kart regional Champion in 2015 and next year became the national champion. On her Instagram account, she has earned over 952K followers.

Hailie was born on the 18th of July, 2001 in the city of Temecula, California. Deegan was blessed to have been able to follow her heart since the age of seven when she started initially driving and taking part in racing as she was the daughter of Marissa Deegan and Brian Deegan who himself is a motocross, off-road racer, and former X games, athlete. It can’t be denied that the racing passion was throughout the Deegan family as her younger brother Haiden and Hudson were also a part of motocross.

Hailie is a high school graduate from Rancho Christian School. She also began home schooling in seventh grade but somehow was able to gain a diploma from high school. With all this racing still, she managed to complete her high school education.

She began her career in Motocross racing completion in 2009 when she began participating in events like SXS Stadium Junior Kart Stock and LORRS Juniors Karts1. In 2013 and 2016 she came 1st position at LOORRS Junior 2 Karts and LOORS Modified karts. In 2017 she began participating in Asphalt races. She was seen in a series of CARS Super Late Model Tour where she teamed up with Bond Suss Racing. Next year she was seen in the NASCAR K&N Pro series east and west where she was teamed up with Billy McAnally Racing.

She also participated in many series held by Camping World Truck Series, ARCA Menards Series East, IMSA Michelin Pilot Challenge, and many more.  Apart from her race she also owns her own merchandise named Shop Hailie Deegan where she deals in clothing and accessories. Hailie will be scheduled to compete in 20 races at the ARCA Menards series and other events as well.  Lately, she has been trained well for her competition as well. Along with that, she has been posting content on her social media account which includes post and pre photographs of her match.

Hailie is currently single and focused on her matches. She cannot afford distractions at peak of her career as her performance has been outstanding. There is no information shared about her past relationships with the media as well. She also loves spending time with her family and enjoys the competitions. In September 2020 she released a comment saying that the Covid-19 pandemic is a hoax because of which she received a lot of criticism. On 21st January 2021, she again received criticism for using discriminating statements during an iRacing live stream on her twitch channel.