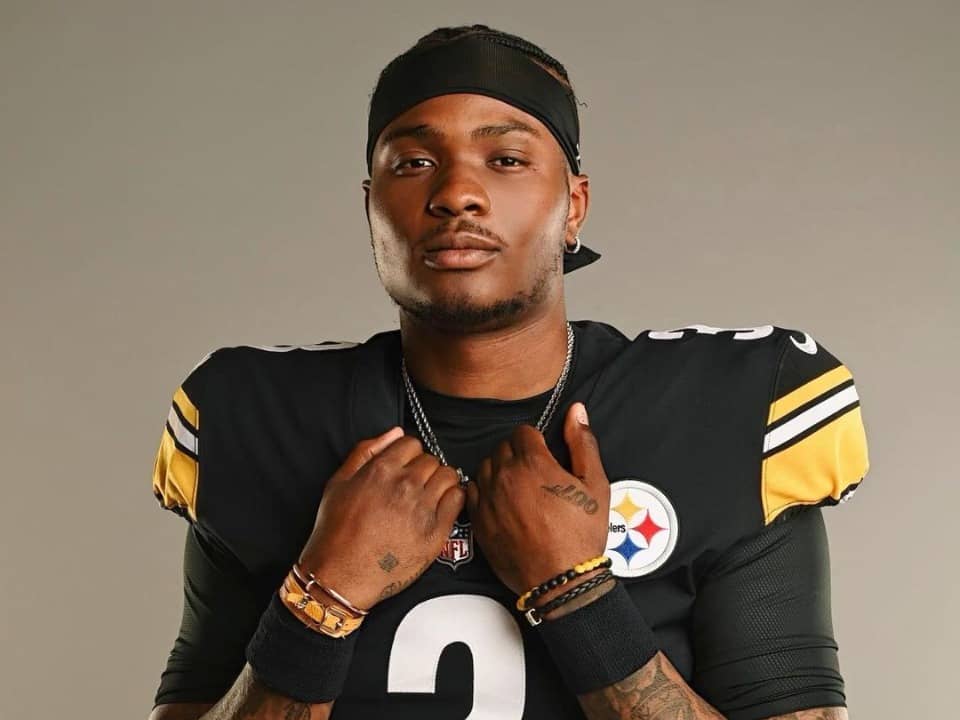 Dwayne Haskins is an American football quarterback who plays for the National Football League’s Pittsburgh Steelers (NFL). He was a quarterback at Ohio State University, where he threw 50 touchdowns in his lone starting season, making him one of only seven quarterbacks in NCAA history to accomplish so in a single season. He was a finalist for the Maxwell Award and the Heisman Trophy after winning multiple Big Ten conference honors. Haskins was picked in the first round of the 2019 NFL Draft by the Washington Redskins. However, he was released after less than two seasons owing to both ineffective on-field play and failing to satisfy the team’s off-field expectations.

Dwayne Haskins Jr. was born in Highland Park, New Jersey on May 3, 1997. Haskins participated in the USA vs. World game in Ohio in 2011. Even though he was an eighth-grader at the time of the game, Haskins wowed everyone with his attention to detail. His family relocated to Potomac, Maryland, with his family when he was in ninth grade. From 2013 until 2016, he attended Bullis School and played football there, passing for 5,308 yards and 54 touchdowns.

Haskins used to carry a football in his backpack during his high school years. Dwayne would arrive early for practice to help with receivers on footwork drills. Haskins Sr., as well as Haskins’ mother and sister, would come to the practice location around 9 p.m. for one or two hours of practice. Haskins received offers from 38 colleges. He chose the University of Maryland over Rutgers to play college football, but after Randy Edsall was fired midway through the season, he changed his mind and chose Ohio State.

In 2016, Haskins redshirted his freshman year at Ohio State. He was J.T. Barrett’s backup the following year. He completed 40 of 57 throws for 565 yards and four touchdowns on the season. In the 2018 Big Ten Football Championship Game, he threw for 499 yards and five touchdowns, and in the 2019 Rose Bowl, he threw for three touchdowns, earning him MVP honors in both games.

He also received first-team All-Big Ten accolades, six Big Ten Offensive Player of the Week awards, the Graham–George Offensive Player of the Year, the Griese–Brees Quarterback of the Year, the Chicago Tribune Silver Football, and the Male Ohio State Athlete of the Year trophies for his efforts. He was also a Semifinalist for the Maxwell Award and came in third place in the Heisman Trophy vote. Haskins declared in January 2019 that he would forego his last two years of college football and join the 2019 NFL Draft. He majored in journalism from his college.

On May 9, 2019, Haskins signed a four-year rookie deal. Haskins made his NFL debut in Week 4 against the New York Giants, filling in for Case Keenum, who was benched due to poor performance. Haskins made his first career start against the Buffalo Bills the next week, throwing for 144 yards in a 24–9 loss.

Haskins dropped almost 7% of his total body fat before the 2020 season and was selected as the starter and one of the team captains. Coaches were displeased with Haskins’ work ethic and performance, therefore he was benched before the Week 5 game against the Los Angeles Rams. He was fined $40,000 by the squad and lost his captaincy after breaking COVID-19 protocols for the second time.

Despite this, he started the next game against the Carolina Panthers before being replaced in the fourth quarter by Taylor Heinicke. The next day, Haskins was released by the team, with head coach Ron Rivera stating that it was in the best interests of both parties if they parted ways. Other claims of him making poor decisions and failing to match the team’s standards off the field prompted the departure. Haskins signed a futures contract with the Pittsburgh Steelers on January 21, 2021.

Dwayne Haskins Sr. is his father’s name, and Tamara Haskins is his mother’s name. Tamia Haskins is Haskins’ younger sister. She is four years his junior, and they both went to the same high school. Haskins’ sister is an actress who also happens to be his best buddy.

Kalabrya Gondrezick-Haskins is Haskins’ wife. The two have had some issues in their relationship, as seen by an incident on July 3, 2021, at The Cosmopolitan in Las Vegas, in which his wife struck him with a tooth discovered on the floor, knocking off his teeth.

Dwayne Haskins is believed to have a net worth of $8 million as of 2021. Because he was released by the Washington Rodskins while his contract was still active, the team still owes him $4.3 million for the next two years. In January, Haskins agreed to a one-year, $850,000 agreement with the Steelers.