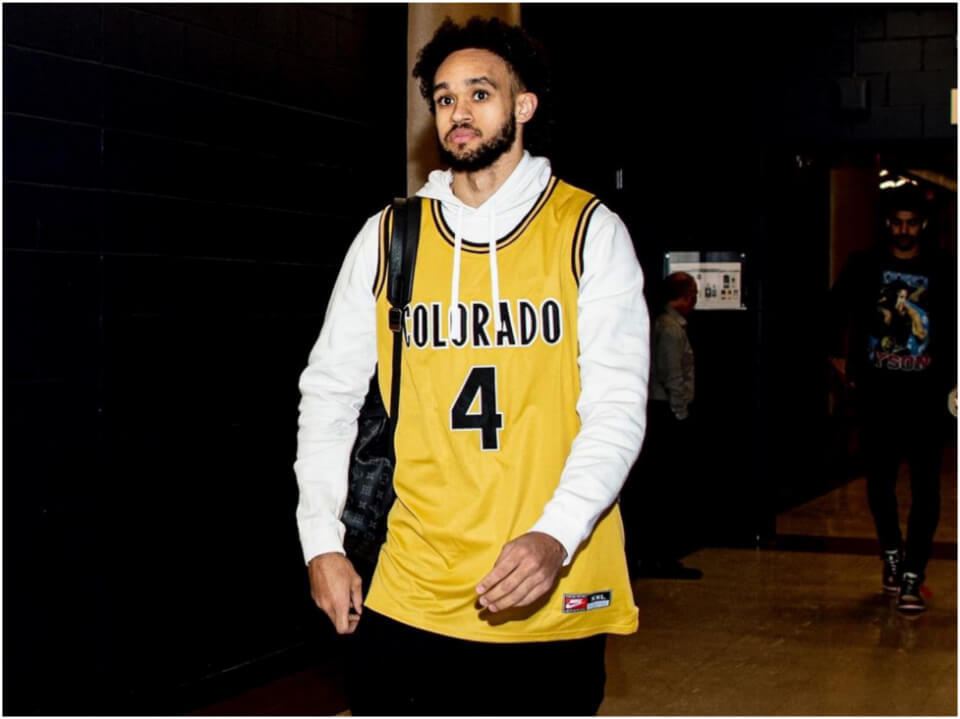 Derrick White has surely stepped up his game as he continued his mesmerizing form in the NBA Finals 2022 as well. He is committed to playing with the National Basketball Association- NBA with Boston Celtics team. Previously, he has played basketball for around three years in Division II for the Colorado–Colorado Springs Mountain Lions and in the Division I Colorado Buffaloes for his final season.

Derrick White was born on 2nd July 1994 in Parker, Colorado, and was brought up by his loving and caring parents named Richard White and Colleen White. Apart from him, he has a sister Brianna with whom he shared his childhood memories. White is a graduate student of Legend High School situated in Parker, Colorado. During high school he was under six feet thus, he had to wait until his senior year and later lightly recruited as a basketball player. He has visited the University of Colorado for his higher education.

Derrick was one of the 60 NBA prospects who were given invitations to appear for the 2017 NBA Draft Combine. Later, he became only one of the 15 combine invitees who were not listed in the Rivals top-150 prospects in the high school, and simultaneously he was one of the three personalities who did not make any significant commitment to Division I programs out of his high school. Additionally, he was the only personality who would use his first NBA contract to pay off the student loan taken for the tuition at UCCS as a freshman, according to Yahoo Sports writer Jeff Eisenberg. Initially, he was drafted by the San Antonio Spurs in the 29th pick of the 2017 NBA draft. Later, he was enlisted in the Spurs’ 2017 NBA Summer League roster. Later on 6th July 2017, Derrick signed a contract with the Spurs.

After three months of the signing contract in October 2017, Derrick had his debut with the NBA and came out of the bench with 107-99 overall scores and a win in hands over the opponents the Minnesota Timberwolves. After a few days at the end date of October 2017, he was sent along with Dāvis Bertāns to the Austin Spurs of the NBA G League. Later White suffered due to his fracture in the right wrist during a G League game against Texas Legends, later to which he was recalled by San Antonio after several days. On 12th March 2018, Derrick made a career-high 14 points with one assist, four rebounds, and a block with an overall score of around 93-109 and a loss in the hands while playing against Houston Rockets.

On 14th April 2018, Derrick made his first NBA playoffs debut and came out of the bench with seven points, a block, and one assist with an overall score of 92-113 and a loss in hands against the Golden State Warriors in the game 1 of the series. On 10th February 2022, Derrick White was traded to the Boston Celtics for the exchange of the two players Josh Richardson, and Romeo Langford.

He was given the chance to play with the Boston Celtics with a 2022 first-round pick and the availability of the right to swap 2028 first-round picks. Derrick had his first game with Boston Celtics a day later which he finished with 15 points, 6 rebounds, and 2 assists. Most recently in May 2022, During game 6 of the Eastern Conference Finals and while holding up the team against Miami Heat, Derrick scored 22 points on 7-for-14 shooting, with 3 assists, 3 steals, and a loss of the game with an overall score of 111-113.

Back in December 2021, Derrick White signed a contract with the Spurs and the team expected him to play for around four years as per the contract. Both parties signed the contracts with around a $73 million rookie-scale extension. Derrick joined Boston Celtics in the exchange for two other players. However, it is not known about his recent signing contract or the increase in his increment.