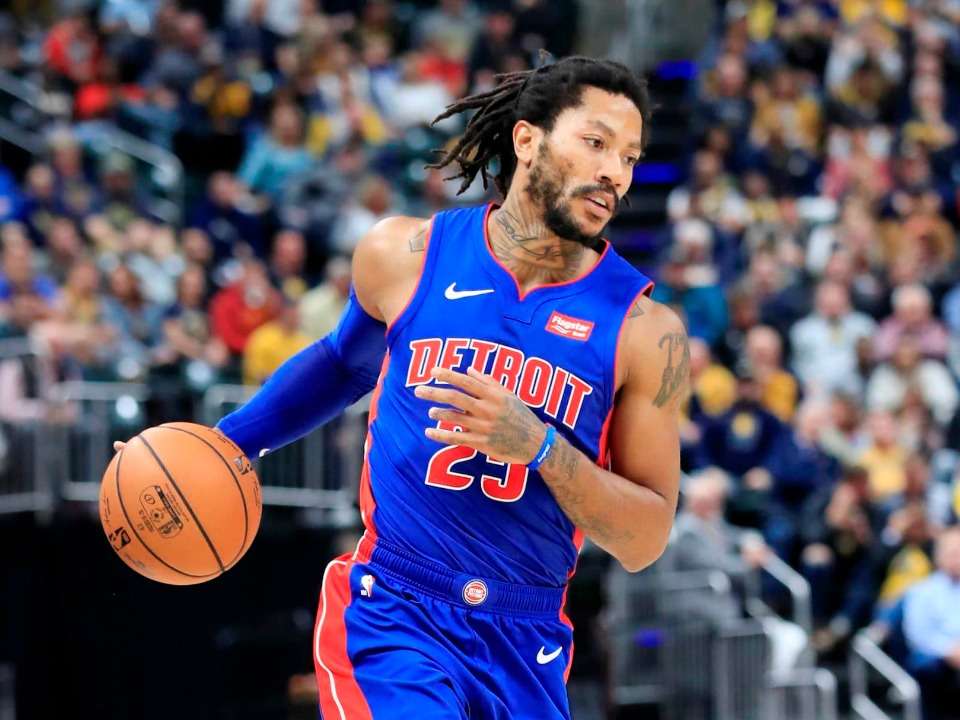 An American professional basketball player, Derrick Rose is a popular sportsperson. He plays for the New York Knicks of the National Basketball Association. Rose also played college basketball for the Memphis Tigers. He is full of the sporting spirit and a professional athlete, who is capable to break and create records.

Derrick Martell Rose was born on 4th October 1988 in Chicago, Illinois, United States while was raised in the Englewood area, which is considered as one of the most dangerous neighborhoods on Chicago’s South Side. He was born the youngest of all the children in his family to his mother, Brenda Rose. He shared his childhood with Dwayne, Reggie, and Allan. All his siblings were talented basketball players who coached him in the in and outs of basketball on nearby courts.

Derrick initiated his high school and soon resulted in numerous wins and awards. He quickly became one of the country’s best high school players. In his senior years, as a high school’s best point guard averaged 25.2 points per game and guided Simeon Wolverines to a 33-2 record, and won the 2006 Chicago Public League Championship. In his lone year at Memphis, Rose led the Tigers to 38 total wins, the highest in the NCAA history. Rose began his professional career after getting drafted by the Chicago Bulls in the 2008 draft and was selected with the first overall pick.

In his sophomore year, with the full form on the field, he continued and scored his first career triple-double with 22 points, 10 rebounds, and 12 assists in a 96-84 win over the Memphis Grizzlies. Later in the season end, he became the only third player to records 2000 points and 600 assists in a single season. In 2011, he played against the Philadelphia 76ers but got injured. Due to his injury, he missed all the 2012-13 whole year NBA season.

During the 2015-16 season, the rose has a season-best game averaging with 30 points, 9 rebounds, and 8 assists in a 115-110 loss to the Denver Nuggets. After that, he left the Bulls and joined the New York Knicks. After a severe injury, he started the season with a career-high 50 points in a 128-125 win over the Utah Jazz. Later, on 7th July 2019, Rose signed a contract with the Detroit Pistons and became the first player to record seven consecutive more than 20-point games as a reserve, whit a career-high 14-game streak of scoring 20 points or more. Moreover, in March 2018, he joined the Minnesota Timberwolves. Later, on 8th February 2021, was traded back to the New York Knicks.

Rose was involved and was accused in a federal civil lawsuit to assess in 2016, if he and his friends raped an unnamed former girlfriend in August 2013. In the month before, rose’s accuser, Jane Doe testified that he made her uncomfortable by asking her to perform sexual activities or to involve other people in their sex life. Doe also mentioned that, rose drugged the girl against her consent and alternated in and out of consciousness on the day of the incident. In October 2016, he was declared not liable by the 8-member jury, and in 2018 the appeal was denied.

Rising Athlete, Rose is found active on social media lately and generating a huge buzz on all his social media platforms through his looks and astonishing talent. The handsome hunk has gained around 1.8 million followers on his Instagram handle @drose while on his Twitter, he enjoys around 2.5 million followers under the username @drose.

In October 2012, Derrick and his girlfriend, Mieka Reese welcomed their son, Derrick Jr. However, it is not known that if they are currently in a relationship or not but in 2018, it was reported that Rose had secretly married model Alaina Anderson. They started dating in 2016. Later, on 6th March 2018, the couple was blessed with a baby girl and named her Layla Malibu Rose. Furthermore, in July 2019, the duo welcomed their 2nd child, a baby boy named London Marley Rose. Derrick and Alaina officially engaged on Madison Square Garden Court and also shared a massive diamond ring on social media as well.

Alongside his professional career being an amazing basketball player, she also earns income through several endorsements. In 2008, he signed a shoe deal with Adidas for $1 million per year. Also signed with Wilson Sporting Goods. Other endorsement deals include Skullcandy headphones, Powerade, Force Factor sports drinks, and Sunburn Chicago Nissan dealership.

His annual income out of endorsements is estimated at around $2 million. in 2012, it was reported, he signed a contract extension with Adidas for 14 years’ worth $185 million. Along with his popularity as a fruit of success, he has also gained a large bank balance. The self-made millionaire currently possesses a whopping net worth of $85 million. while his annual salary from his profession is around $7,500,000.