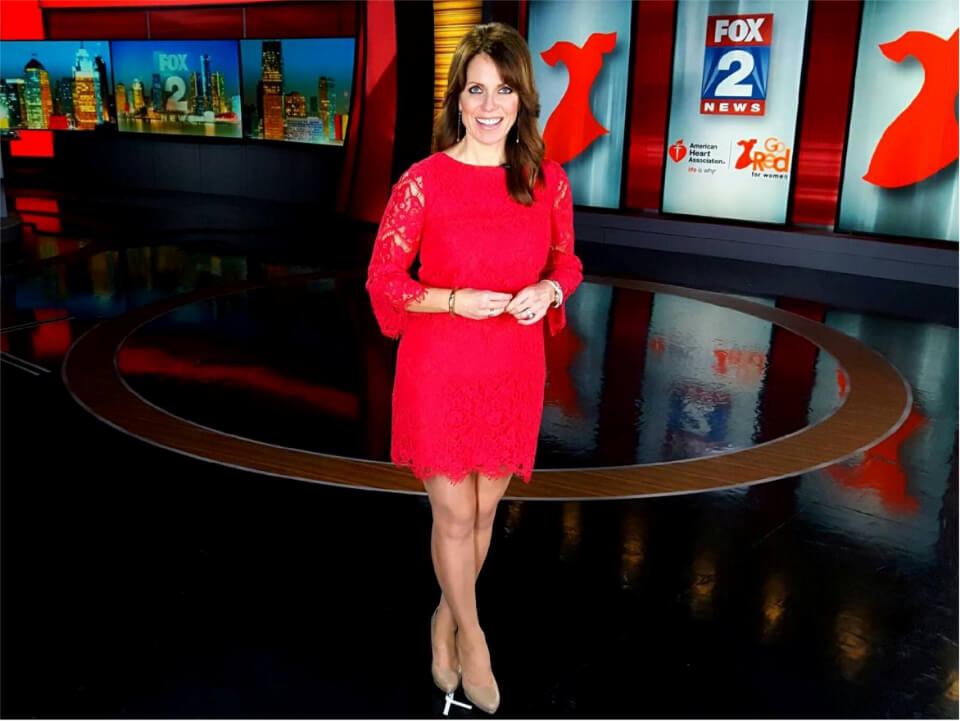 Deena Centofanti is an anchor and reporter who has been working at Fox 2 News Channel for two decades. She is known to anchor the health news and reporting featured by “The Nine.” She has also earned an Emmy Award for her phenomenal performances in the field of anchoring.

Deena Centofanti (aged 50 to 60) spent her childhood in a Norman Rockwell-like town, Hudson, Ohio. as featured by “The Nine,” in her bio, she says that she remembers ice creams, socializing with others while eating, a town square with a gazebo, and the exciting controversy that went during the time about McDonald’s wanting to build on the outskirts of the village. She was in 8th grade when she moved from her birthplace to a suburb of Cincinnati.

She shared her childhood with her younger brother, who was born with special needs. Throughout her childhood, she had to spend her days on a tightrope, trying to balance between the roles of elder and proud sister and quietly handling the teen role as well.

After completing high school, she went to Miami (of Ohio) University to receive her favorite subject degree, Broadcast Journalism. She was brought up by her loving and caring parents, Marsha (mother) and Joe (father). Her mother was compassionate, and her father taught her values by telling her different stories and moral values.

After completing her school and University degree, Deena Centofanti began working professionally with WSYX in Columbus, Ohio. At that time, she used to get $5 an hour doing any job they gave her concerning the TV and the reporting work. It was also when she came in contact with her long-time friend and the production director, Keith (the future husband).

Later in 1997, Deena landed an opportunity to meet the chance to work at Detroit at Fox 2 news. She has been featured on “The Nine” and has revealed that during the initial days of her professional life, she had to work hard to connect with new people, get to know the new city, and fight out the daily resources and stories. It was the hardship of her life, and she was at the peak of her hard work. However, she says that life was rewarding because she landed to work at the Fox 2 News channel.

After that, she spent nearly two decades with Fox 2 and has met incredible people throughout her time at the channel. She has mentioned that during her time at the Fox 2 News channel, she has cried with people, laughed with them, gone through hardships, and bad fortune, stood with parents, cried with pride and tears with disabled children, and also saw the devastating loss that the company faced.

Whatever it was, she says that it was the period of job, the period to learn, and the period to experience things and share stories. She has realized the things with her friends over the channel though they all were different. She gives her thanks to two things, the viewers of Fox 2 News and the family of Fox 2 News. This is because she has always sought support, wisdom, laughter, and love from the family of her workplace.

Deena moved to seek high-pay jobs, and so did Keith, her close friend. Although the two were divided by the mile of distance, they still behaved like a team and used to stay in contact with each other. Finally, in 1996, Deena married her long-time friend and the senior at the first job, seeking blessing from many in their job circle and families.

In 1999, Deena became a mother for the first time. A boy was born out of her womb, and he gave her new life and love and introduced her to the new world. But she was healthy and happy and became a health reporter. She still had the job in her hands, and it was a huge challenge to maintain things then.

As soon as the work was blooming, her health and her family were also blossoming with time. She gave birth to a daughter in 2002 and another girl in 2005. She is now the mother of three children who filled her with joy, humility, and the best of things she always wanted.

Deena Centofanti is available on Facebook with her original, complete and official name. On her official Facebook account, she has got more than 28,0000 followers. She is also available on Twitter @fox2deena, with 36.6K followers and only 7K tweets. She joined Twitter back in November 2010. You can also catch her posting insights into her married life and children’s stories on her Instagram account, @deenafox2.

Deena has spent nearly 20 years working as an anchor and reporter at Fox 2 News channel. She says that if you ask her, “Where are you from?” she would rather say- Fox 2. She would certainly be earning well and as high as $5 million.