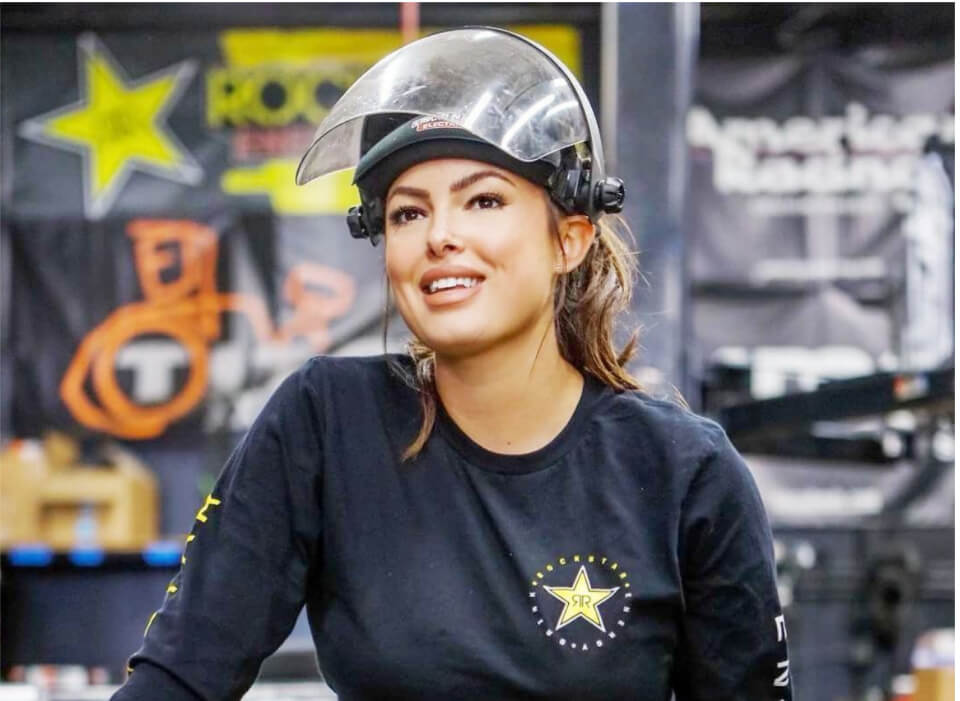 Constance Nunes is an American personality who has developed herself into a successful model and Reality TV personality of Portuguese descent. She was raised in the suburbs of Los Angeles California and is famously known for her talent associated with car repairing, the automotive industry, TV performances, TV commercials, and movies. She starred in the Netflix series “Car Masters: Rust to Riches”. Nunes has worked with notable clients such as Wrangler, Jockey, and Jlux Label.

Constance Nunes is 31 years old and was born on 17th November 1989. Although she was born in Portuguese, she was brought up in Los Angeles, California. She is the girl of the 21st century, who is open-minded, and loves to explore the sphere of car restoration and modification.

Nunes has an impressive modeling portfolio and she often used to have her photo shoots for the brands like Wrangler, Jockey, Jlux Label, Javanan Magazine, and Feral Cosmetics. She is not a shy girl like others and often exposes her dazzling side to her fans on her social media profile. Constance has been involved in many professions in the TV industry, modeling, car repairing, movies, and photo shoots for magazines, but her first love is car modification. She used to spend her time with cars or in the garage with her dad in her childhood. With the limited time she had in her life; she dedicated that time to her modeling and television projects. She developed her interest in car modification from the passion of her dad who was the race car driver of his time.

This is one of the few reasons that she secured a featured place in the Netflix series- Rust To Riches. Nunes also built cars for specialty shops. She has a few years of experience while working with a few car brands like CARS Etc, Classics, and Charlie’s Corvettes. Many high-profile clients have been involved with her and often used to approach her for various tasks. The brands are named VP Racing Fuels, 4 Wheel Parts, and Nitto Tires, as well as Audi, where she has worked as a specialist. Nunes has also developed herself as a car model. One other fact about Nunes is that she has a few roles in the movies. She has done stunts in movies like Bring it On and Dodgeball.

Constance Nunes has worked for Maxim magazine and has done bikini photo shoots for them. In one of her interviews with the inquisitive guy at Maxim Magazine, Nunes revealed how men used to catch her attention by posing “slick lines”. She says that her Instagram message box is clogged with numerous messages from men and boys who always remain in the line of catching her attention.

However, many might not know that Nunes is a married woman. She has married her long-time friend and partner named Jared Toller. The pair exchanged the rituals of marriage in front of their friends and families in Piru, California at the New Hall Mansion on 9th February 2019.

Teenagers can do crazy things to rebel, but when it came to Nunes, she acted by purchasing a 1964.5 Mustang. Nunes’ father bought a car when Nunes was 16 and she calls the car “Babystang”, where she loves to spend her time while being alone. She has done several television commercials for the brands like Reebok, Motorola, and Kim Kardashian Hollywood Game, as well as for Kia’s Superbowl Commercial in 2016 alongside Christopher Walken. Surely, she must be earning well because of her multi-professional career line. For the moment, her estimated net worth is somewhere around $2 million.