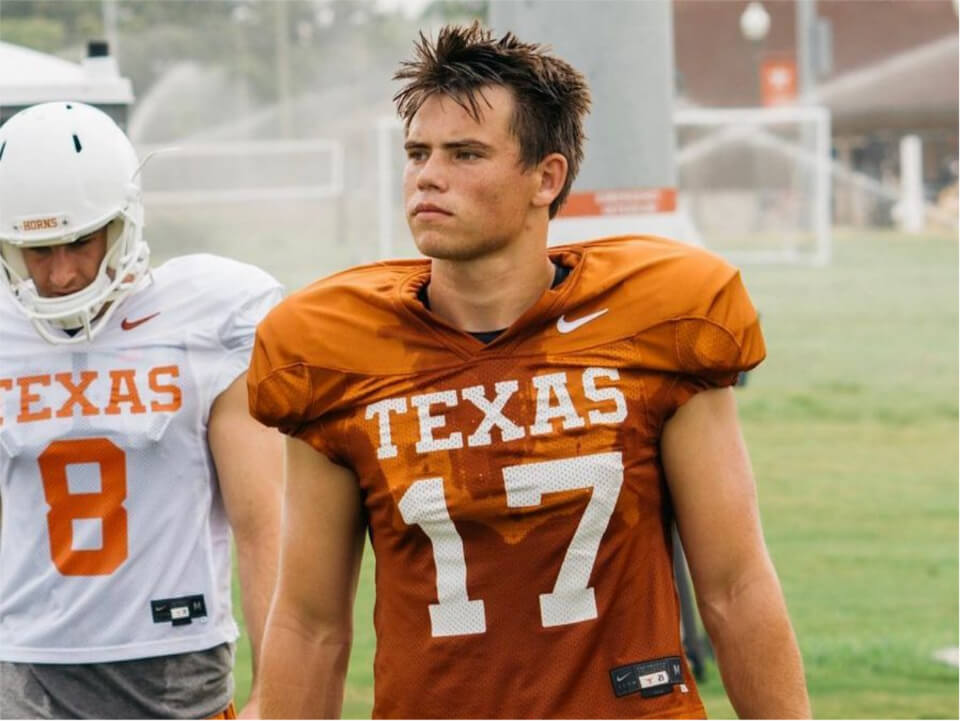 Cameron Dicker is an American football player for the National football league team named Los Angeles Chargers. His position at the game is a kicker and has made 4 field goals, 42 longest field goals, and 4 touchbacks. While at high school he became a two-time all-state selection and a starting kicker. In 2021 he won First Team All-Big 12.

Cameron Dicker was born on 6th May 2000 in Hong Kong. The names of his parents are Kelly and Rachel Dicker. He also has one sister whose name is Annabelle. At a young age, he actively played various sports and decides to pursue the same professionally. He also enjoyed watching soccer. Cameron went to Lake Travis High School in Austin, Texas to pursue his high school education. Along with his studies, he was also seen playing American football for the school team. Later he went to the University of Texas and earned his major in Business: Marketing. Over there he also played college football for their team.

At Lake Travis High School he had a score of 331 points going 34-43 on field goal attempts and 229-232 on extra points attempts. He set the school record with a 53-yard field goal. On 4th May 2017, he was committed to playing for Texas. Over there he scored 18-25 on field goals and 51-52 on extra points. On 19th January 2022, he declared himself for the NFL Draft. He signed with Los Angeles Rams as an undrafted agent and was released on 16th August 2022. After 10 days he was signed by the Baltimore Ravens but after two days he was waived. Later on 4th October 2022, he was signed by the Philadelphia Eagles to join them in their practice squad.

On 9th October 2022, he made his debut against Arizona Cardinals and made two field goals including a game-winning 23- yard kick.  Later on, on 29th October he was released by them. On 3rd November 2022, he signed with Los Angeles Chargers practice squad and after 3 days, he made two field goals and a game-winning 37- yard kick against Atlanta Falcons. He happens to be the first rookie kicker who won special teams player of the week awards for two different teams.

Cameron is in a relationship with his girlfriend Annie Buerk. The duo met while they were pursuing their studies at Lake Travis High School, and her mom works as a special education teacher over there. In 2015 they officially started dating and have been rooting for him in his games. The fans are waiting for their engagement or wedding announcement.

Cameron is an active user on social media and enjoys posting content relating to his games, training, fitness, and family. On his Instagram account, he has earned 47 thousand followers and 1,352 followers. In June 2015, he joined Twitter and earned over 4,980 followers and 664 followings.

Cameron has earned a lot as a professional NFL player. His salary with Los Angeles Rams in NFL has been estimated at around $705,000 with $4000 as a signing bonus. According to sources his net worth has been estimated at around $1 million. He earns by winning the competition or by performing well. Along with that, he makes a fortune through brand endorsement deals or by attending events as an important guest.