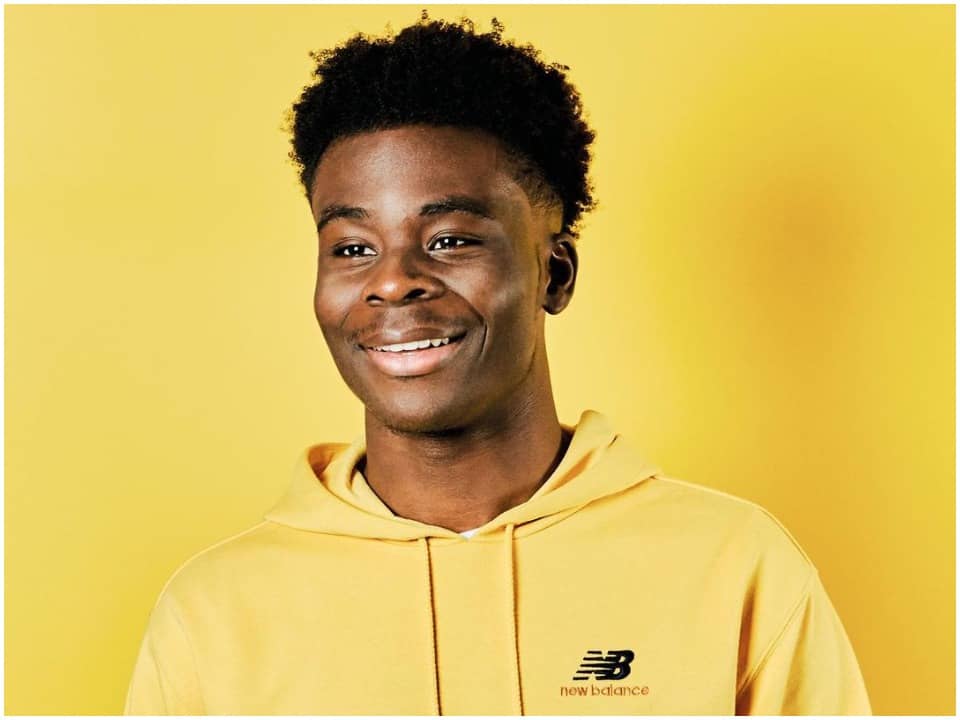 Bukayo Saka or popularly known as Buyako Saka is a professional English footballer for England national team and he plays the role of winger, left-back, or central midfielder for premier league club Arsenal. In the Yoruba language spoken in southern Nigeria, His name Buyako means “adds to happiness”.Saka started his professional journey at an age of just 17 years, he signed a contract for under 23 with Arsenal. He won multifarious championships in his career including the UEFA runner-up championship as a runner-up.

Bukayo Ayoyinka T.M Saka was born on 5th September 2001 in Ealing, Greater London in the United Kingdom, hence engraving to an English nationality. His parents left Nigeria to settle in London for better living standards and newer opportunities for their unknown child. No information regarding his parents could be fetched from the web. His brother, Yomi, played for Watford until he was about 14, and he was enrolled into the Hale End College in Arsenal. Apart from playing football, he used to focus on athletics during high school.

He finished his primary education at Edward BethamcofE primary school. Further, he went to Greenford high school for his freshman, sophomore, and high school years and maintained consistently good grades in GCSEs. he played youth football for local club Greenford Celtic during his high school times. Furthermore, no information about his college and university is available on the web.

Being from a family which was highly enthusiastic about football, he was the one who took up the dream of his father and other family members. He got enrolled into Arsenal’s Hale End Academy at an age of 7 only. When he turned 17 he was offered a professional contract by Arsenal and promoted to the under-23 side. On 29 November 2018 Saka initiated his senior competition for Arsenal in the Europa League. Saka made his first full home debut for Arsenal against Qarabag on 13th December 2018. Saka attained his first senior goal on 19 September, curling a fine effort from long range into the corner away to German side Eintracht Frankfurt in the UEFA Europa League. He ended the match with two assists also to his name in a 3–0 win.

On 1 July 2020, Saka signed his latest long-term contract with Arsenal. Head coach Mikel Arteta praised Saka and said: “I think he represents every value that this football club stands for. He has come through the academy and earned his respect with hard work and accountability and everyone can see his progress as a player but as well as a person. On 28 August 2020, Saka was in the starting 11 and he registered an assist in the FA Community Shield in 2020, in which Arsenal clinched a 5–4 victory over Liverpool in the penalty shoot-out after the match was 1–1 after 90 minutes of the match. On 6 March 2021, Saka made his 50th Premier League appearance for Arsenal in a 1–1 draw against Burnley; he is the second-youngest player to reach this milestone.

No past affairs and relationship records are available on the internet along with that some sources confirm that he is in a relationship with a girl but no full proof could be found about her name, there might be some confidential issues.

He has not generated various income sources, however, he is paid weekly from the Arsenal and he gets $70,000. Along with that, a prominent website claims his net worth to be $2.2 Million.