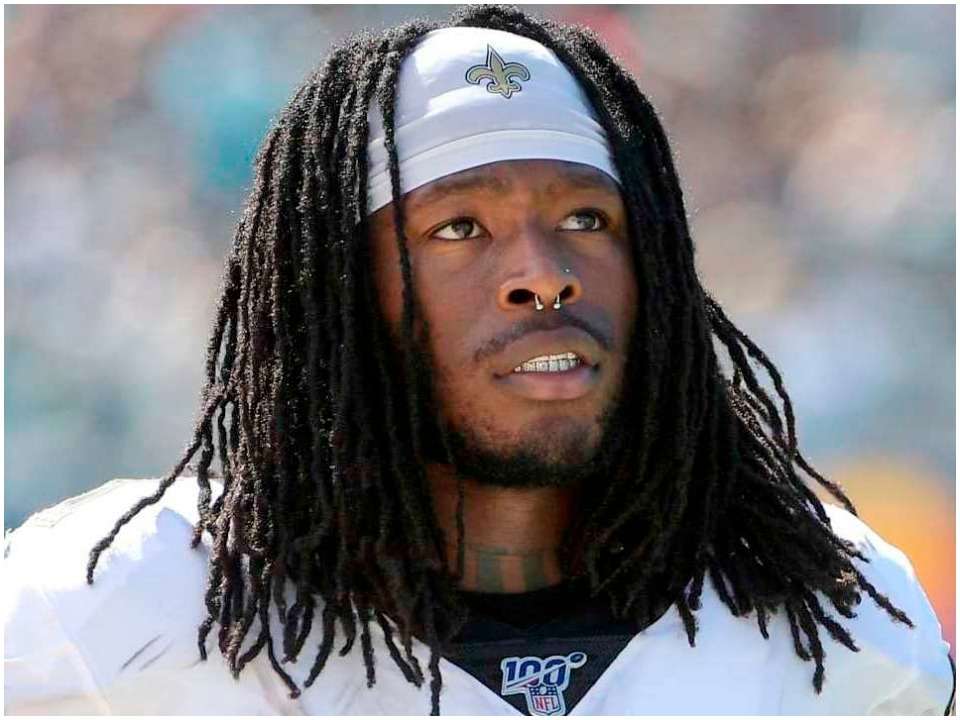 Alvin Kamara is an American football running back who plays for the New Orleans Saints of NFL. He played college football at the University of Alabama before getting transferred to the University of Tennessee. Later, he was drafted by the Saints in the third round of the NFL Draft 2017. He was honored with NFL Rookie of the Year 2017 and has remained the Pro Bowler in all four seasons of NFL. He has also been honored with the All-Pro second-team two times. In 2020, Kamara became the second player in the history of the NFL who rushed for six rushing touchdowns in a single game.

Alvin Kamara was born on 25th July 1995 to a Liberian mother. Alvin spent his childhood growing up in Norcross, Georgia. He is among the two children born to his mother Adama Kamara. Adama belongs to Liberia but had to flee from her home because of the Librarian War. On the other hand, Alvin’s father remained to be absent since Alvin was a kid. It was quite tough for the whole family to manage their financial crisis and work on the daily routine things or to survive on their own in the USA.

Although, Alvin’s sister was always there by his side. She was the one who knew his next step before he used to decide to work on something. He was well-supported by his mother and sister who is called Garmai K. she was his best friend since he was young. They both helped him achieve and work for his dream.

Alvin went to Norcross High School and thereafter played high school football for the team named Blue Devils. He performed while being in the team and rushed for 1,300 yards with 17 touchdowns as a junior in 2011. Then in 2012 as a senior, he rushed for 2,264 yards with 26 touchdowns that further led high school to get named for the first state championship. He was honored with Georgia’s Mr. Football by the Atlanta Journal-Constitution. In addition, he was nominated to participate in 2013 Under Armour All-America Game. While passing his high school, he was considered to be one of the top running backs who prospected in the whole nation. He was honored with being number 1 all-purpose back in 247Composite, number 42 nationally in 2012, and at number 5 in Georgia.

He was also nominated to be the number 6 player in Georgia by Rivals.com. The time when he was in high school, he received a scholarship offer from Syracuse University. As a senior, he got committed to playing for the University of Alabama under the head coach of Nick Saban. Kamara received the highest Wonderlic test score of running backs while being a part of the NFL Combine. He also participated in Tennessee’s Pro Day but later chose to be only at positional routes. He was drafted by the experts and analysts who all projected him in the second-round pick and ranked him as the fourth-best running back and fifth or seventh-best running back by different outlets including Sports Illustrated, ESPN, NFL analyst Mike Mayock, Bucky Brooks, and many more.

Alvin is dating Te’a Cooper because they often spent time together. Te’a is the ex-wife of Dwight Howard and they split up after she accused Dwight of cheating on her. Even though he was rumored to be dating a girl whom he met in a strip club in 2017, their relationship was short-lived as the two broke up. Alvin has been in trouble many times. Once, he was arrested for his possession of BB guns and damaging Alabama’s engineering building. He paid the bill of $3000 which was later paid by the University of Tennessee.

Alvin Kamara possesses a net worth of around $8 million. He has made a contract with the New Orleans Saints in 2017 that was worth $30,00,000 out of which he received $1.4 million in his first year. The Saints offered him $75 million with an extension of construct bonus of $15 million for five years contract extension. Although, he doesn’t spend a penny from his career earnings because he mentioned that he solely lives by spending only from his sponsorship and endorsements deals.