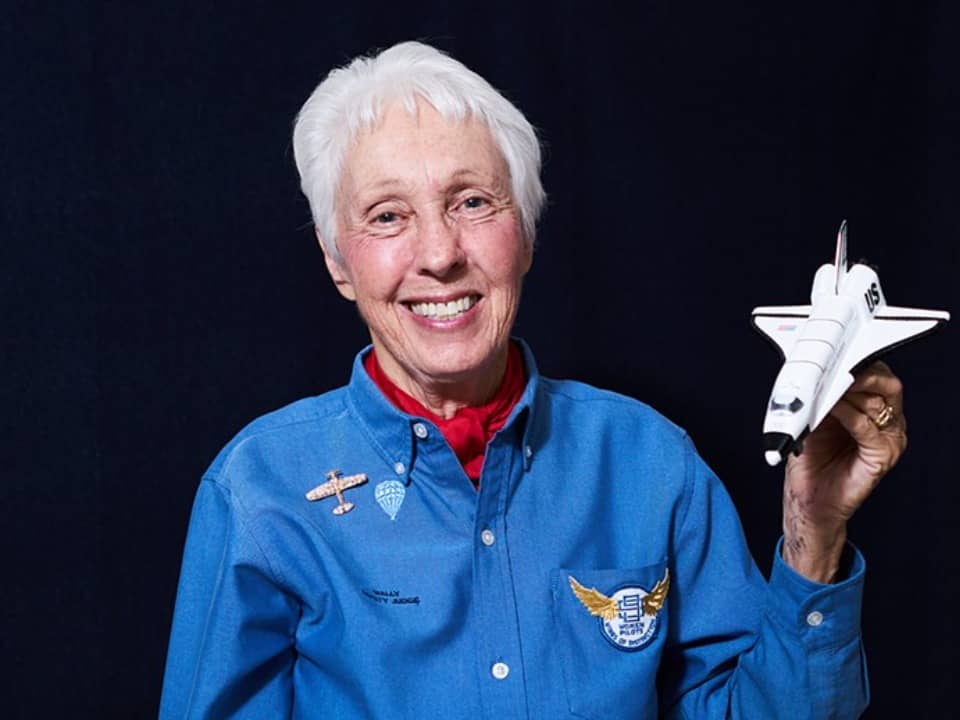 Wally Funk, an 82-year-old American Aviator is one of those persons who are going to Space in the Blue Origin Spaceflight. She is also a goodwill ambassador and has secured tons of titles during her entire aviation career, she was the first female air safety investigator for the National Transportation Safety Board. Wally is the oldest person in space on Blue Origin’s New Shepard Spacecraft that took its flight on the 20th of July 2021 along with the world’s richest man Jeff Bezos. She was into automatics from a very early age, when she was just nine years old she took her first flying lesson.

Mary Wallace Wally Funk was born in Las Vegas in New Mexico, however, later their whole family shifted to Taos in New Mexico and she grew up there. No information regarding her parent’s name is available on the web, but her father was the owner of a departmental store in Taos and her mother was an art enthusiast that’s why their house was full of artwork which was sold off by the artists at their store in order to clear off the debts. Further, there’s no information regarding her siblings available on the internet. She was a space and plane enthusiast from a very early age and it was her mother who came across the talent of Funk.

During her high school, she was greatly inclined toward the courses such as mechanical drawing and auto mechanics, but due to society’s pressure she was not permitted to process her career with these subjects, however, she wasn’t able to cope up with the home economics subject that’s why she left high school at an age of 16 and went to Stephens College in Columbia, Missouri where she became the member of the “Flying Susie’s” and she was rated number one in her batch of 24 fliers, she completed her graduation in 1958 and secured her pilot’s license along with an Associate of Arts degree.

She was highly inclined toward planes and space ever since her childhood. When she was just one year old, her mother and father took her to an Airport near their residence, she got very close to a Douglas DC-3 which is an old airliner. Afterward, she developed her interest in mechanics and built model airplanes and ships. When she went up further, she started making planes from balsa wood. When she turned 9 she started taking her flying lessons. Post teenage, at the age of 20 Funk became a professional aviator. Afterward, she started her first job at Fort Sill, Oklahoma as a civilian flight instructor for the commissioned officers of the United States Army.

Furthermore, in the fall of 1961, she was accepted as a Certified Flight instructor in California, USA. In the 1970s when NASA started accepting women, she applied there 3 times but she was rejected because of her non-pilot background. From 1961 to 2020 she had earned an enormous number of awards and titles which turned her into a well-known person. Now, in July 2021 Blue Origin has announced that she will be flying on the first crewed flight of the New Shepard. She flew on the 20th of July along with Jeff Bezos and an 18-year-old boy and one other person.

Her marital life is really amazing, when asked in an interview whether she’s married or not, she confessed that “she is married to planes”, this one line displays her love for her career. Currently, she is residing in Roanoke, Texas. There aren’t any genuine accounts related to her available on Instagram, she might find Instagram a waste of time only. Further, she has an account on Twitter(@wallyfuckraceforspace), recently she tweeted about how she’s feeling regarding her space journey that would take place on 20th July. She has a follower count of 1051 on her Twitter.

She earns most of her earnings from spacecraft and aviation. Further, her net worth is estimated to be $200k-$500K.

As already being said by some of the great people” it is your dreams only that couldn’t be stolen by another person” and the same is proven by wally, she always dreamt of being into space and aircraft, she goes against the norms of society that girls should not Rudy the aviation subjects and she studies those subjects and for those, she left her high school at an early age and went to college. Further, she had always proven herself by always chasing her dreams rather than being stopped by the boundaries that society creates. She will always be a great inspiration for every person around the world, especially girls who want to pursue their studies in aviation engineering.