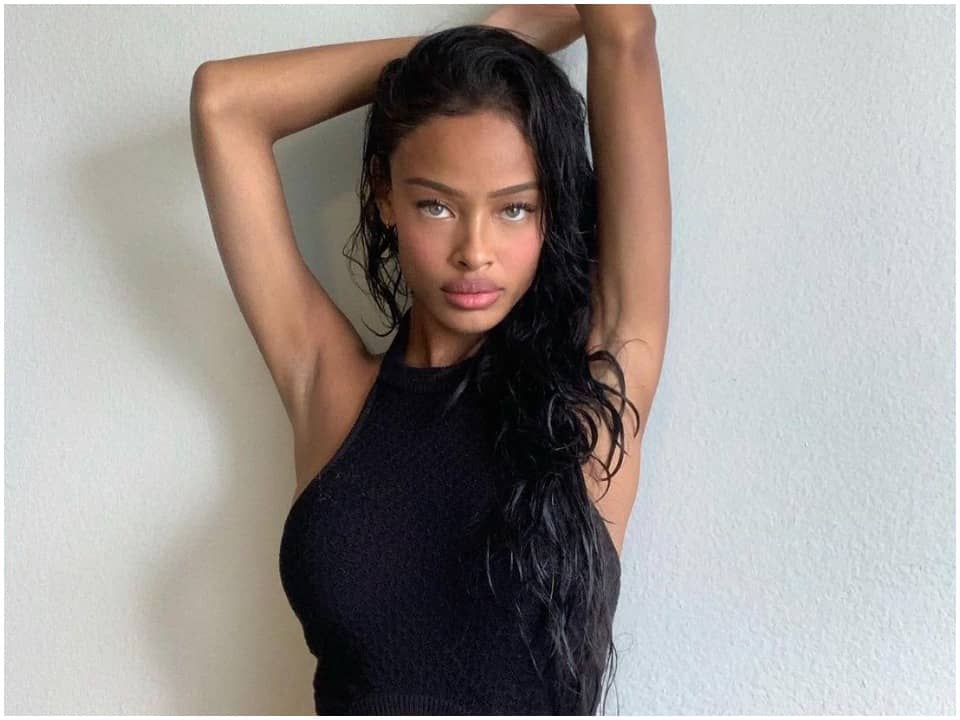 Vinetria is a California girl who is recently seen with Kim Kardashian’s estranged husband Kanye West who is 44 in age. Vinetria has kept her life private from the public’s eye. She has made her contract with Public Image Management and is reportedly new to the industry. She is 5 feet 9 inches in height and owes dark brown hair with green eyes.

Vinetria was born on October 26, 1999, in California, the USA in a well-settled Christian family. As far as her real name is concerned then the only information we can gather is that she uses Karen in her surname. For gaining basic school education she enrolled in Santa Fe High School and after that, took admission to the University of California. Although, quickly after completing college she diverted her focus towards modeling and the showbiz industry and decided to be a model in her future as well.

Being a fashion model, she has been signed by Public Image Management and under that banner, she managed to grab so many commercial campaigns. Apart from that, she has done private gigs with other modeling agencies and also posed for several magazines as well. Vinetria is a YouTuber who owns her self-titled channel which got 159k subs to this date. She usually posts content regarding makeup tutorials, skincare advice, vlogs, and all kinds of stuff around her.

Vinetria is quite popular on Instagram and Twitter. Once, she called social media “a disease” while posting on her Instagram profile in October 2019. She holds the message of not using Instagram for comparing life with other people’s lives and said that it is only ever seen on Instagram. It is rumored that the time before they (Vinetria and West) made their relationship public and came in front of cameras, Vinetria deleted almost all the pictures of Instagram and was left with only 12 on her feed. However, she keeps herself updating with the help of Twitter where she often posts many memes and more unfiltered glimpses of her life.

Two days after Kim’s sister Kourtney Kardashian announced her engagement with her long-time boyfriend Travis Barker in October 2021. To that post, Vinetria tweeted that she was so so happy for Kourtney Kardashian. She seems to be a big fan of Kim Kardashian with whom she feels close and that’s why she congratulated her sister on her engagement. Earlier that month, Vinetria reposted a picture of Kourtney and the Blink-182 drummer posing under the Eiffel Tower that was further captioned with a crying emoji.

Vinetria is not a good fan of Kim’s half-sister Kylie Jenner’s boyfriend, Travis Scott which she expressed earlier in January 2020 and wrote on her Instagram story that Travis Scott is annoying. Talking about Vinetria’s social media profile, her fans will get to see lots of things as she has referenced numerous of her favorite singers including Bob Marley, Nicki Minaj, and Adele. She recently (in October 2021) posted lyrics of a cryptic song that is meant to be for her new romance with West.

The rapper Kanye West was snapped with American model Vinetria who is nearly half of his age. Vinetria and Kanye West came together to attend a basketball game in Minnesota which amazed every fan of West that with whom he has come. West is yet to reveal details about his new hook-up and everything related to how it all started. Their connection has surprised the fans as he was just paired with Kardashian a week ago for giving a voice to something related to music (of course) that gave “hopes of reconciliation”. To that moment West told the media outlet that they had not divorced each other.

He further added that Kardashian was still being with him as she is the mother of his four children and she was still his wife. Four days on, US entertainment site page six tells a very different story. Vinetria was seen sharing her Instagram footage with West in October. The Donda Academy’s basketball game was their first event that they attended together and stunned everyone with the question- How long they have been dating each other? Vinetria has a public Instagram page where she has almost 389,000 followers that are further leaving the fans in ways of clue. Her grid features only 12 posts since her first post in 2018 that further includes her caption-less selfies, model shots, and tribute to Bob Marley and basketball player Kobe Bryant.

It is quite obvious that being a part of the showbiz industry, she is earning quite a healthy wealth by which she is living a lavish lifestyle. As a fashion model, she mostly earns from her professional modeling career and some part from her Instagram through promotion and brand endorsements. Het estimated net worth is around $2 million but the actual numbers would be quite more than this.