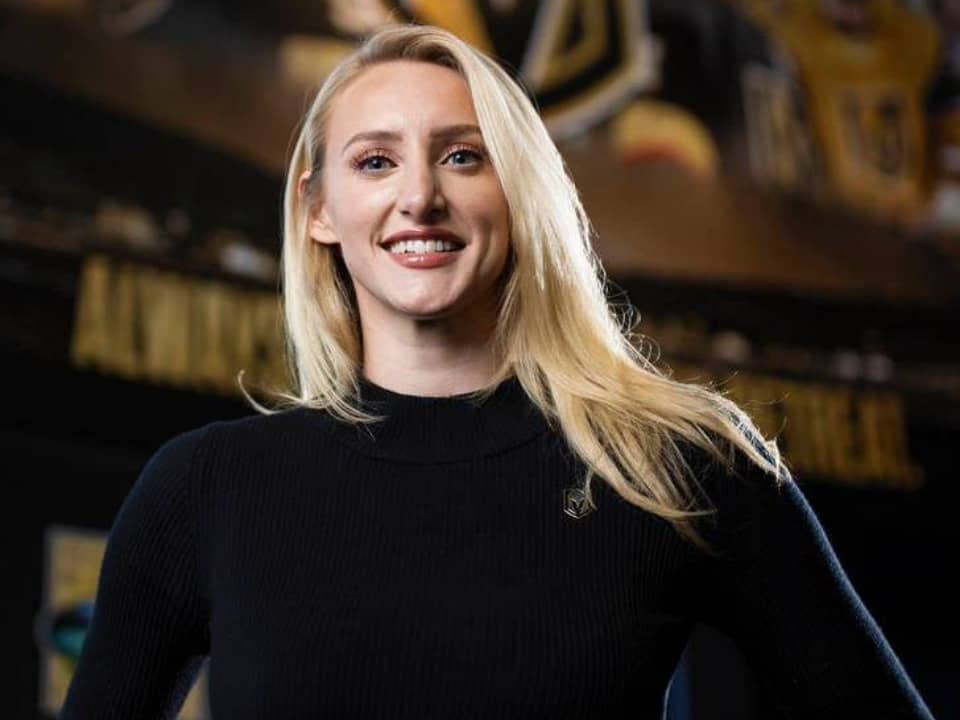 Stormy Buonantony is a famous American sports reporter who is currently working as a Rinkside reporter and host on AT and T SportsNet.Stormy is one of the most popular sportscasters recently who covers all updates and news around the hockey team Vegas Golden Knights. Apart from being a famous reporter, she is also an anchor, producer, and videographer as well.

Stormy Buonantony was born on 13th July 1992 in Las Vegas, Nevada. Her mother Cheri Shipp is a professional gymnast and she is now a gymnastics coach. Her father played professional baseball with the St. Louis Cardinals.

Stormy stated that they have always supported her ever since the start of her journey. She was brought up in Las Vegas and then she shifted to work and college in California. Stormy loves binge-watching tv series during her free time.

She has been awarded a certificate in Broadcast Journalism from Palomar College in San Diego. After that, she attended San Diego State University from the year 2010 to 2014. She completed graduation with a bachelor’s degree in journalism and did her minor in Behavioral and cognitive neuroscience.

After she was done with her education she started freelancing in different roles. After some months she began working as an intern for CBS followed that she took training at Prep Sports Live. From the year 2016 to 2017 stormy was working as a sideline reporter for campus insiders. Later she started freelancing for NBC News as a sports editor and producer. This internship lasted for one and a half years.

Till 2019 Stormy worked as a freelance reporter for the Charlotte-based ESPS and Raycom Sports, where she covers news regarding baseball, football, and the College World Series. This led to her major achievement of being an official in-stadium reporter of the Carolina Panthers, a professional American football team but before she was an official member she freelanced there.

She is also skilled at video editing as she produced NBC News Sports Pod. She is also good at videography and broadcast-style writing. Some of the awards she has received are the national academy of television arts & sciences ‘heartland Emmy award for technical achievement in June 2016, For outstanding production in sports, in 2013, Cynopsis sports leaderboard award winner for excellence in social media in December 2015, Cynopsis sports leaderboard award winner for social media category.

Stormy is active on various social media platforms like Instagram, Twitter, and Facebook. On these various platforms, she has more than a thousand devotees. Her Instagram handle is @sstormy and she has 599 posts and 16.8k followers.  She also has a profile on LinkedIn showing her professional status however, she doesn’t have a page on Wikipedia.

Stormy is in a relationship with Cristopher Normandt for seven years now. They are soon going to marry as evident from her recent Instagram post which she shared to wish Cris birthday. She wrote,

So crazy to think this was the 1st birthday of yours I spent with you 💙 SEVEN years ago. I’m emotional writing this thinking about how lucky I am to have you as my best friend (& soon husband). Words truly are not enough to describe how grateful I am to have you in my life. (I’m a lot to deal with & this guy handles all the ups and downs and twists and turns I throw at him, and is right there supporting me and challenging me to better no matter what). You make up for all the areas I lack and I hope I have an impact on your life half as positively as you’ve had on mine. I love you so much. Happy birthday.

Stormy Buonantony does not like to show her income to the public hence she has not mentioned much about it. But her net worth is around $ 2 million. Her main source of income is journalism.