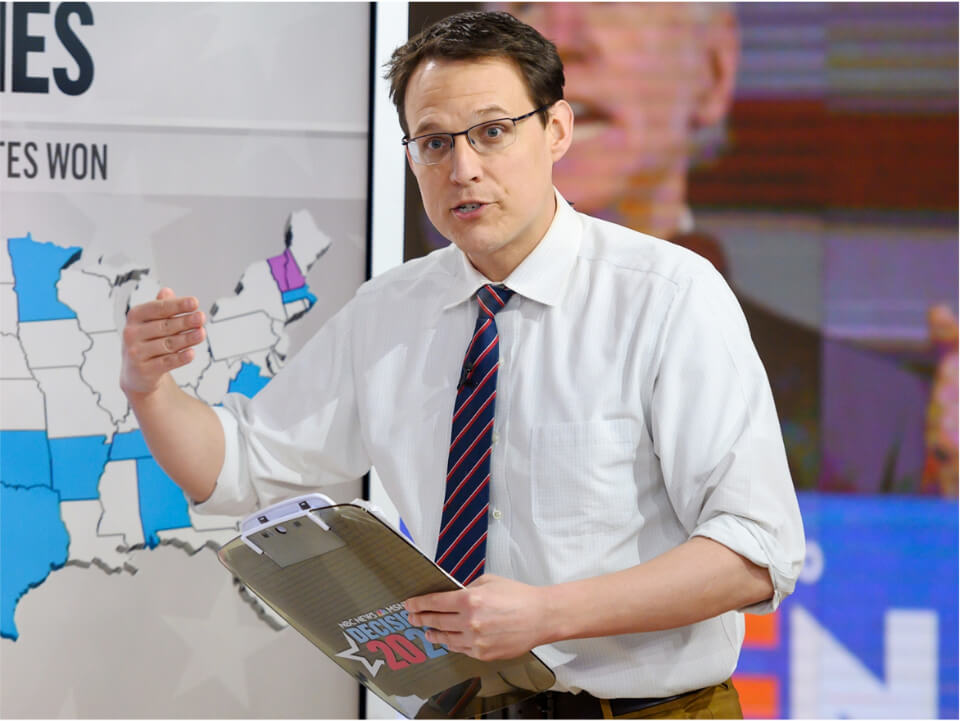 Steve Kornacki or Stephen Joseph Kornacki is an American political Journalist, writer, and television personality famously known as a correspondent for NBC news. He has gained extensive experience in the political journalism field and his opinions are well-read and published by several magazines and newspapers.

Steve Kornacki was born on 22nd August 1979 in Groton, Massachusetts. He grew up with his parents Stephen Joseph Kornacki Sr, Anne Bernadette, and his sister Kathryn Kornacki. Her sister works as a professor at Caldwell University. Steve has not shared many details about his family but is known to be a catholic. Steve is known to have graduated from Groton Dunstable Regional High School. He later went on to attend Boston University where he studied Film and television. He has not shared any other details about his educational background and qualification.

Steve Kornacki started working as a journalist for Politics NJ.com a news site in New Jersey. She started working in 2002 and worked with the platform till 2006. He was also the co-host of a political news series News 12 New Jersey where he reported about the US congress. In 2012, he went to work with MSNBC channel and started co-hosting The Cycle along with Krystal Ball. Later, he also started hosting another show at MSNBC titled UP. By 2014, he was asked to host the election coverage on the channel and since then, political coverage has become his forte. His career flourished and he also started hosting other shows like Hardball with Chris Mathews, The Rachel Maddow Show, and many others. He has also worked as an anchor and television presenter for MSNBC’s show The Place of Politics.

By 2017, he joined the NBC news channel and started working as a national political correspondent. He also started hosting his own podcast titled “Article II: inside Impeachment” on the NBC news channel where he covered Donald Trump’s impeachment in 2019. Steve often publishes his works in magazines and publications like Salon, The New York Observer, The Wall Street Journal, New York Times, and many others. He is also the author of the book titled “The Red and the Blue: The 1990s and Birth of Political Tribalism” in 2018. The book talked about the polarization of politics.

His love for sports swiftly moved him towards hosting and covering sports programs for NBC sports and started appearing on Football Night in America in 2020 to analyze the NFL season. Later, he also covered the 2020 summer Olympics. Recently, he has been under constant talk on Twitter with several hashtags trending for his amazing way of discussing the election updates on the MSNBC channel. He has gained a lot of hype and following over the few weeks and is being loved by all his viewers who eagerly wait for his election updates.

Steve is highly active on social media platforms through which he likes to express his opinions and views. He is active on Twitter where he currently has 688.5k followers. He also has an Instagram account where he has 74.1k followers. Other than this, he also has a Facebook account with 1.2k followers.

Steve has openly come out in the media and revealed himself to be gay. He revealed this through an article in the magazine Salon in 2011. He opened up about his previous relationship with a person named Dan who helped him to understand his sexuality and coming out. Recently in 2020 during the election coverage on MSNBC, he was rumored to be in a relationship and married to David Mack, however, it was meant as a joke. He is not known to be in a relationship with anyone as of now and is settled in Manhattan.

Steve Kornacki has built himself a name in journalism and is well-known to every household. Looking at his success, he is believed to lead a luxurious lifestyle and is considered to earn a handsome income. His exact income is not known but his net worth can be estimated to be around $1.5million.