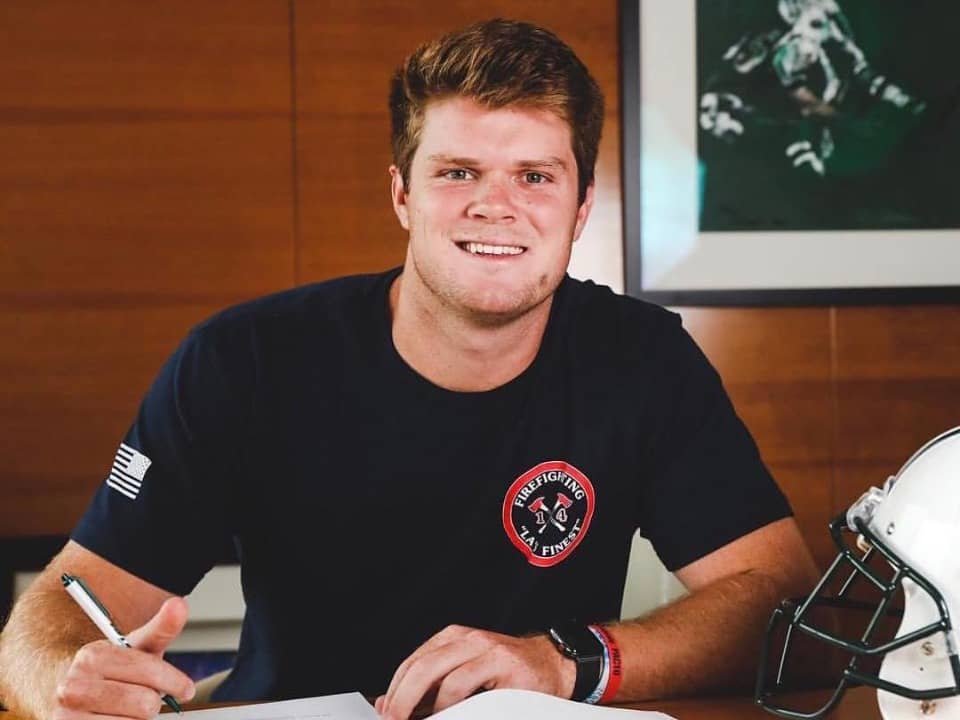 Sam Darnold is an American professional NFL Player. He was seen playing for New York Jets and now will be playing for Carolina Panthers at the position of a Quarterback. In 2016 he was a recipient of the Archie Griffin Award and Pac-12 Offensive Freshman of the Year. His passing yards statistics is 8,097, passer rating is 78.6, rushing touchdown is 5, and completion percentage is 59.8.

Sam was born on 5th June 1997 in Dana Point, California, United States of America. The names of his parents are Chris Darnold and Michael Darnold. His sister, Franki is a college volley player at the University of Rhode Island. He was very athletic at a young age and used to play Football and Basketball. Sam went to San Clemente High School where he graduated with a high school degree. For his further and higher studies, he went to the University of Southern California. Over there he showed active participation in playing American football.

Sam began his career in the field of Football and was seen competing against Tesoro High School and Trabuco High School. He ended his senior season with a score of 3,000 Passing Yards, 39 touchdowns, 800 rushing yards, and 13 rushing touchdowns. Later he was rated by Rivials.com as a four-star recruit and was ranked 179th best player overall. From 2015-2017 he played for USC. For his freshman year, he was redshirted. Next year season he played against Utah Utes, Washington Huskies, Penn State, and more teams. His team was also invited to play at the 2017 Rose Bowl. In 2017 as a sophomore he played against Stanford, Texas Long Horns, and many more. He also played at Pac-12 Conference Championship and the 2017 Cotton Bowl.

On 3rd January 2018, he decided to enter the 2018 NFL Draft. He was selected by New York Jets in the first round, with the third overall selection. On 10th August 2018, he made his professional debut against Atlanta Falcons. He was seen competing against Detroit Lions, Quandre Diggs, Miami Dolphins, Cleveland Browns, Jacksonville Jaguars, Denver Broncos, and many more. In 2019 he was seen competing against various teams like Buffalo Bills, Dallas Cowboys, New England Patriots, Miami Dolphins, New York Giants, Oakland Raiders, Cincinnati Bengals, and many more.

He completed his season with 3.024 passing yards, 19 Touchdowns, 13 Interceptions had 33 carries for 62 rushing yards, and two rushing touchdowns. His 2020 season was finished with 2,208 passing yards, 9 touchdowns, and 11 interceptions to go along with 217 rushing yards, 2 rushing touchdowns. He was seen in games against Indianapolis Colts, San Francisco 49ers, Buffalo Bills, Denver Broncos, and more. On 5th April 2021, he was traded to Carolina Panthers and on 30th April 2021, the team exercised the fifth-year option on his contract.

Sam is currently in a relationship with Claire Kirksey since 2017. They met at USC and soon began dating. Claire resides in Huntington Beach, California, and also played softball in school. In the 2018 concert in Los Angeles, they were spotted having fun. They like to keep to their details on a low key away from the limelight.

Sam has earned a lot from his NFL career and winning games as well. In 2018 he signed a contract worth 30.25 million along with $20 million as a signing bonus for a 4-year deal. According to sources his net worth has been estimated more than $30 million. Some other sources of his income are from sponsorship and by attending various events.