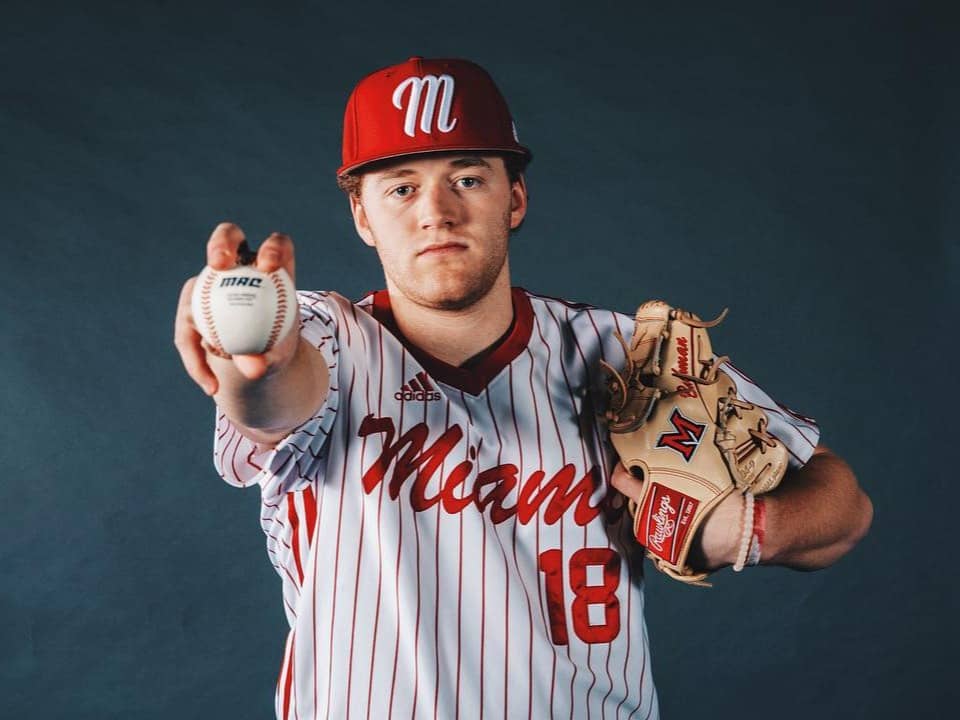 Sam Bachman or Samuel Duane Bachman is an American College Baseball player who currently plays with the Miami Redhawks and was the Freshman All-American and MAC freshman pitcher of the year in his freshman year. He is currently a top prospect in the 2021 MLB draft.

Sam was born on 30th September 1999 in Fishers, Indianapolis, the USA to his parents Suzanne Bachman and Kevin Bachman. He grew up with his sibling brother named Gabe but much has not been shared about him. Sam believes in Christianity and is of white Caucasian ethnicity and he is currently 21 years old. Sam attended Hamilton South-eastern high school and graduated in 2019. He then went on to pursue college baseball and joined Miami University where he is currently in his junior year and pursuing his degree in Microbiology.

Sam started his baseball career in high school where he was part of the school team and played as the Pitcher. He maintained a great record during his high school years and also became a two-time Letter winner at pitching. Sam made a total of 100 strikeouts during his school career. He joined Miami University and as a right-hand pitcher and a starter in the Miami Redhawks team in 2019.  In his freshman year, he played in 15 games and maintained a great record with ample strikeouts and minimal runs, he became the Freshman All-American, MAC freshman pitcher of the year, and First Team All-MAC.

In his sophomore season in 2020, he made 31 strikeouts in only four games that he played due to the covid 19 pause followed by junior season recently in 2021 where he scored 93 strikeouts in all 12 games and also became First Team All-MAC. He is currently going as a prospect for the 2021 MLB draft and after his performance in the NCAA 2021 season, he has been ranked as the 14th best MLB prospect as per cumulative ranking by ESPN, Baseball America, and MLB.com. He is currently being considered by Seattle Mariners among various others.

Sam has not shared much about his personal life and relationships. Moreover, he only posts about his baseball career and updates on his social media and is not very personal on such platforms. He is known to be really close to his mother and brother Gabe and also has really close friends from his team Miami Redhawks.

Sam has been playing baseball for several years and has earned through winning games and prize money but since he is a collegiate player as of now, he does not have a regular income. His net worth including that of his family is estimated to be around $600,000.

Sam is a highly talented pitcher with a strong and powerful style. He tried to be in his best form during the games for the team to benefit most from him. Moreover, he is highly ambitious about his dream and respectful towards all his close family and friends who support him through his journey. He is looking forwards to being selected for the 2021 MLB draft and we wish him luck in his future.