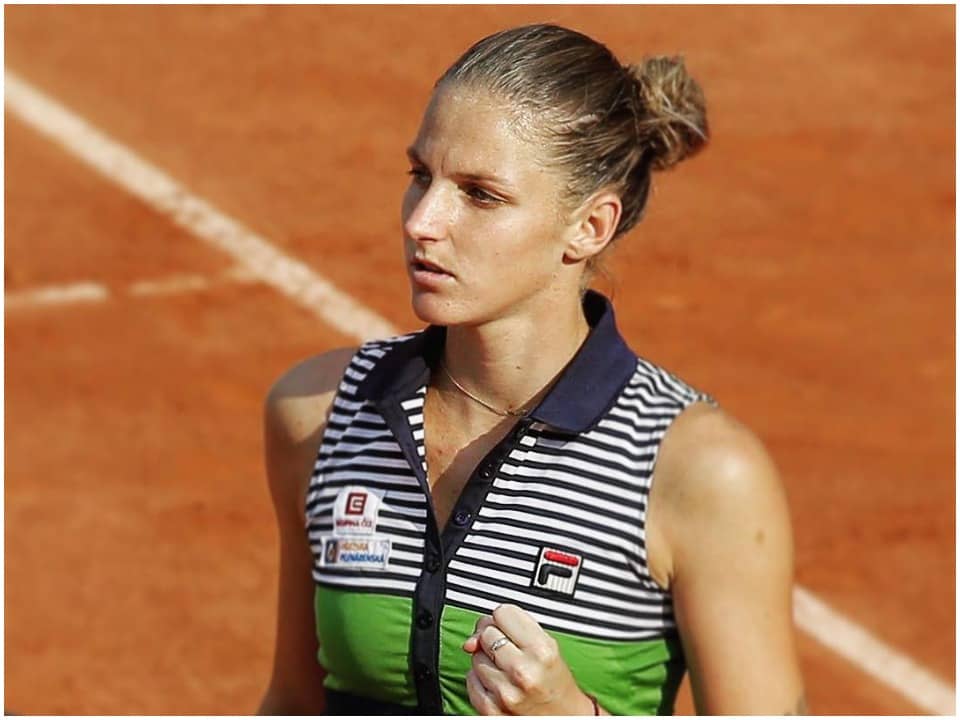 Karolina Pliskova is a former world number one Czech Professional Tennis Player. She is currently ranked world number 9 by the Women’s Tennis Association. Known for her powerful serve and forehand, she has been the top player in the world in women singles. Karolina played Wimbledon 2021 finals against Ashleigh Barty

Karolina was born on 21st March 1992 in Louny, Czechoslovakia. She was born to her parents Radek Plisek and Martina Pliskova and also has a twin sister named Kristyna who is also a professional tennis player. Karolina grew up in a Christian family and is of Czech-white ethnicity. She has been playing tennis since she was very young at the age of four and still going relentlessly in her path at the age of 29 years. Karolina has not shared much about her education and qualifications but it is believed that she completed her high school education at a local school in Louny. She has also not shared if she pursued further education. She is currently coached by Sasha Bajin.

Karolina started her career as a tennis player in the year 2010 and won the match against Laura Robson gaining the Junior Tile in the Australian Open. By the year 2012, she played her first senior Grand slam tournament in the 2012 French Open but lost in the finals. The following year, she won her first-ever WTA title in the Malaysian Open and also won her first WTA doubles title with her sister Kristyna at the Generali Ladies Liz.

In the year 2014, she qualified for several WTA finals in different tournaments but won her third title at Linz and concluded the season-ending at World number 24 rank. The following year she played with the Czech Republic fed cup team for the 2015 Fed Cup world group and won several games which led to the team’s victory. The same year, she played in six finals but could not win despite her excellent performance throughout the year. She ended the reason as world number 11 and was also named the 13th Most popular player as per WTA.

In 2017, she defeated Elina Svitolina and Alize Cornet at the Brisbane International to win her seventh title. The same year, she reached the quarterfinal of 2017 Australian Open and her ranking was increased to world no 3. She became the World no 1 in July 2017 and also became the first person to do so without having a Grand Slam Tournament. She also was the first women player from the Czech to do so. In 2019 grass swing, Karolina won the Eastbourne International title and later successfully managed to reach the 4th round of Wimbledon.

In 2020, she won the mixed doubles at Brisbane and also set the record for the most Brisbane International Titles. She then played at the Australian Open and Dubai and won several matches. She was Ranked at world Number 3 before the season paused due to Covid 19. In 2021, she started off the season with several consecutive losses and her rank dropped to world no 9th. She again played at Italian open and faced the most disappointing defeat in the final match. She reappeared recently with great form along with her sister in the 2021 French Open where the twins haves successfully reached the Quarter-finals of the Grand slam for the first time in their career.

On 17th June 2021, Karolina gave the hard time to American Jessica Pegula in the 2nd round of the 2021 German open. She began the season with world ranking no.6 but unfortunately dropped to no.10. Pliskova’s experience in the grass court championships berlin may just prove to be her saving grace. In the same year, she lost to America three times and this might be saddened and disappointing for her as well as her fans. She will be seen playing till 20th June 2021.

Karolina is currently married to her long-time boyfriend and now husband Michel Hrdlicka. Michel is known to work as a tv presenter and anchor. The couple got engaged to be married in 2017 during the London Wimbledon season and later married in the year 2018 in an intimate wedding with close friends and family. Karolina has since changed her last name, Hrdlicka. They are not known to have any children as of now and are currently settled in Monte Carlo.  She enjoys fishing, listening to Czech pop music, and watching movies in her leisure time.

Karolina has been on Twitter since 2015 and currently has 213.9k followers. On her Instagram account, she currently has a following of 401k and frequently posts pictures with her sister, parents friends, and family. She likes to share pictures from her trips and also shares snippets from her matches. She is not known to have any other accounts.

Karolina has been playing the sport professionally since 2010 and has won several titles and events. She has gained huge respect and popularity along with a lot of wealth from her career. she has majorly sourced her income through her career as a tennis player and earns loads from the prize money as well as through sponsorships and endorsements. Her estimated net worth as of 2021 is around $15 million.