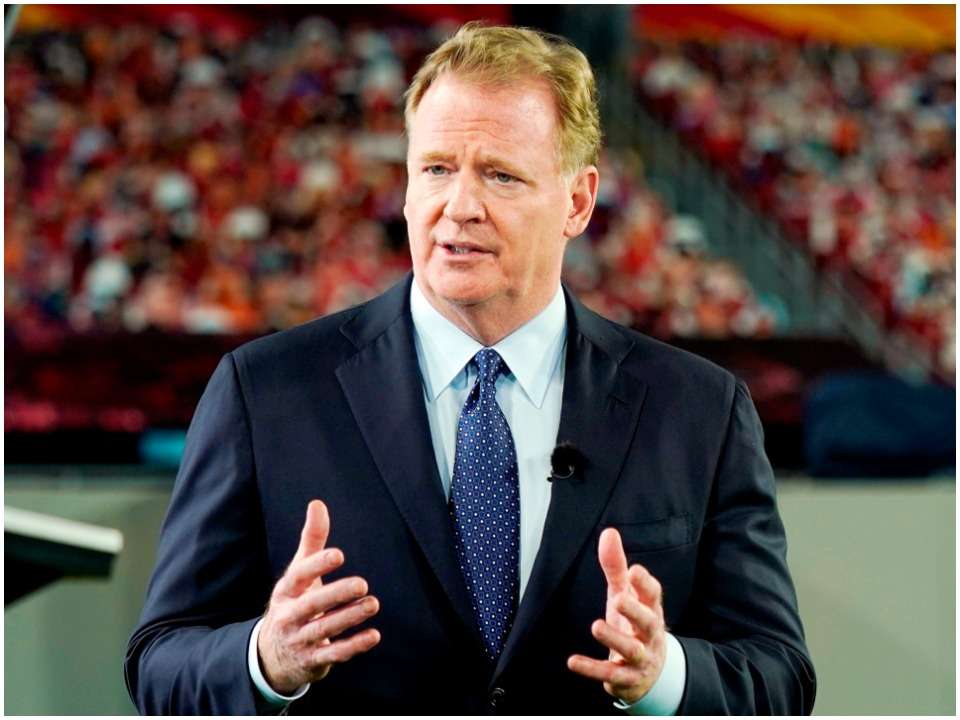 Roger Goodell is an American businessman who is serving as the commissioner of the NFL (National Football League). On 8th August 2006, Roger Goodell took over the position of retiring commissioner Paul Tagliabue. He was included in the four finalists and won the close votes on the fifth ballot. His tenure began on 1st September 2006 just before the beginning of NFL season 2006. On 6th December 2017, the NFL announced that Goodell will sign the contract in 2019. He has also been honored with the title of “the most powerful man in the sports” by the commentators. Goodell is the son of a former congressman and U.S senator of New York.

Roger Goodell was born on 19th February 1959 in Jamestown, New York to Charles Ellsworth Goodell and Jean (Rice) Goodell. His father was the senator of New York and his mother belongs to Buffalo, New York. Goodell completed his graduation from Bronxville High School where he was one of the active participants of football, basketball, and baseball. He was a three-sport star in his school who was appointed as all-three team captain and was named as the school’s athlete of the year. He suffered injuries because of which he had to maintain his distance from football and other games.

Goodell is a graduate of 1981 from Washington & Jefferson College in Washington, Pennsylvania. He has been majoring in the subject of economics. Goodell was brought up with four brothers. Among his brothers, Tim is a senior vice president for Hess Corporation, Michael is a creator of the short-lived NBC series “The Book of Daniel” and is married to Jack Kenny. Goodell generally belongs to a well-educated family that is a mix of all professions. One of his cousins, Andy Goodell, is a member of the New York State Assembly.

Roger started his career with the NFL while being an administrative intern based in New York in 1982. He secured his position as an intern while being present for the letter-writing campaign. Later in 1983, Goodell joined New York Jets as an intern but returned to the league office of NFL in 1984 while being an assistant in the public relations department. After a few years in 1987, Goodell was appointed as the assistant of the president of the American Football Conference, Lamar Hunt. There, he worked in various business operation roles. Later, he was appointed as the NFL’s executive vice president and chief operating officer (COO) in December 2001.

He made his best journey from being an intern to the achievement of COO in the department. On 8th August 2006, Goodell was chosen to be at the position of Tagliabue who was required to step down from his position on 1st September. Later on 23rd May 2018, commissioner Goodell and NFL owners approved the making of a new policy that all the players will stand during the national anthem (given the option to stay in the locker room while the song/anthem is being played) during the national anthem. It would be subjected to the disciplines of the league. In addition, the team would be subjected to punishment and other forms of discipline from the NFL (if not followed the rule).

In October 1997, Goodell married his beloved and gorgeous wife Jane Skinner. Jane Skinner is a former Fox News Channel anchor who used to work on daytime shows while co-hosting “Happening Now” with Jon Scott. On 24th June 2010, Jane Skinner announced her retirement from the network and position of her usual daytime anchoring with the segment Happening Now. She said that she wanted to spend more time with family and that is why she was resigning from her position. Goodell shares two daughters (twins) with his lovable wife Jane Skinner. Both of their children were born in 2001. Today, their children are on the path of making their career in college.

According to Celebrity Net Worth, Goodell’s annual salary is nearly $50 million and sometimes even higher than $60 million. He serves as the commissioner of the National Football League and possesses a net worth of $200 million. It is said that Roger Goodell signed a five-year contract with the NFL in 2017 that is committed to his commissioner work. Even though he is not very much familiar with the fans of the NFL, he seems to be succeeding and making regulations for the NFL while making enough money for the board.