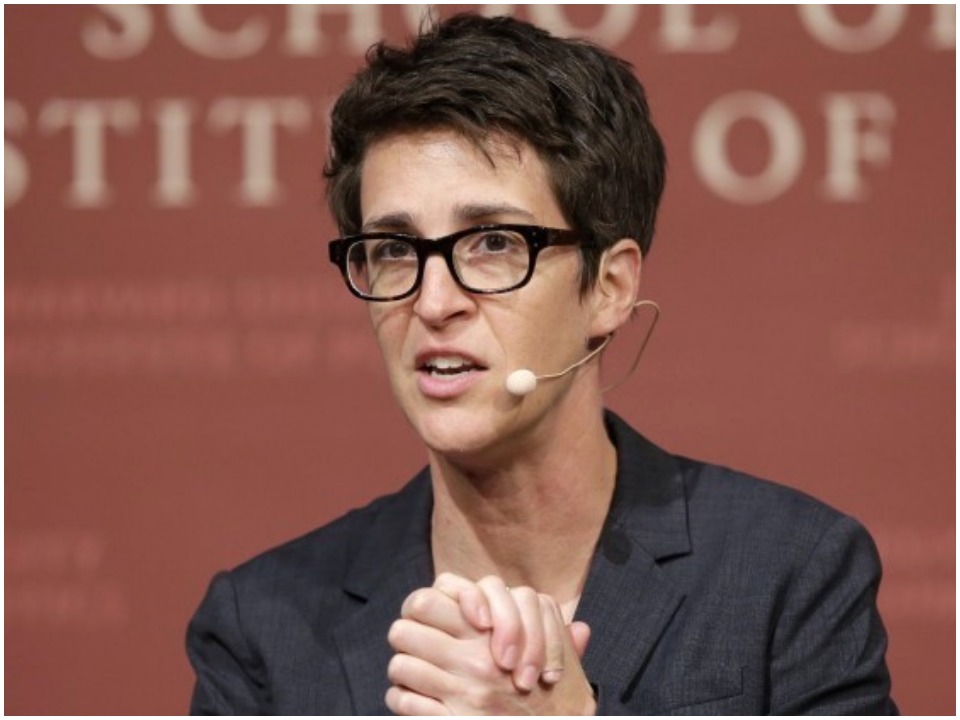 Rachel Anne Maddow is an American television host, author, broadcast journalist, and commentator famously known for her night show The Rachel Maddow Show on MSNBC channel. The Emmy award-winning host is well respected for her years of experience and also for being the first lesbian anchor to host a prime-time news show.

Rachel was born on 1st April 1973 in Castro Valley, California, the USA to her parents Robert B Maddow and mother Elaine Gosse. Her father is a former US air force captain and a lawyer while her mother worked as a school program administrator. She grew up with her brother David and is known to belong to a mixed ethnic background with Irish, Dutch, Jewish as well as Canadian ancestry. Rachel graduated from Castro Valley High school and is known to have completed her bachelor of arts in public policy from Stanford University. She also pursued her MA and DPhil in political science from Lincoln College, Oxford University.

Rachel started her career as a radio host at WRNX in 1999 after which she hosted the Big Breakfast show on WRSI for over two years. In the following years, she continued hosting radio shows like Unfiltered 2004 and The Rachel Maddow show in 2005 with MSNBC. Meanwhile, she also started appearing as a television host as a regular panelist on the show Tucker at MSNBC and by 2008 she also became a political analyst for the channel. She also started hosting the show Countdown with Keith Olbermann in 2008. The same year, the channel announced Rachel’s own show The Rachel Maddow Show which aired every night at prime time. The show soon caught up and became one of the most successful shows for the channel.

Over the years, she has received several awards including the 2011 and 2017 Emmy Awards for outstanding interview, outstanding discussion, etc. Other than hosting, she also works as an author. She penned her first book titled Drift in 2012 where she talked about the military in post-war America. Her next work was published in 2019 titled Blowout: Corrupted Democracy and her most recent work were released in 2020 titled Bag Man: The wild crimes.

Recently, in the 2021 63rd Grammy awards, she was awarded the Grammy Award for best-spoken Word Album for the audiobook version of her 2019 book Blowout. Her work has also been published in New York Times and Washington post over the years. She has now taken a hiatus from her show till April 2022 to focus on other aspects of her work and also to help with the film adaptation of her book Bag-man.

Rachel belongs to the LGBTQ community and came out as a lesbian through her college newspaper. Currently, she is known to be in a relationship with Susan Mikula whom she met back in 1999. The two met while Rachel was working on her doctoral dissertation and have been together ever since. Other than this, she is known to have dealt with cancer and depression in past. Rachel is known to be active over several social media platforms. She currently has 518k followers on her Instagram account while she has10.6 m followers on her Twitter handle. She is also active on Facebook where she has a reach to over 2m people.

A case was filed against Rachel in 2019 for $10million by One America News Network stating Rachel to be “a paid Russian propaganda”. The case was later dismissed stating that opinion couldn’t serve as the basis for defamation and recently in 2021 after appealing the case finally ruled in favor of Rachel.

Rachel has been working as a news anchor for several years and has become a household name among her peers. She has earned great respect and recognition over the years along with a lot of wealth. Her net worth as of 2022 is estimated to be around $25million.