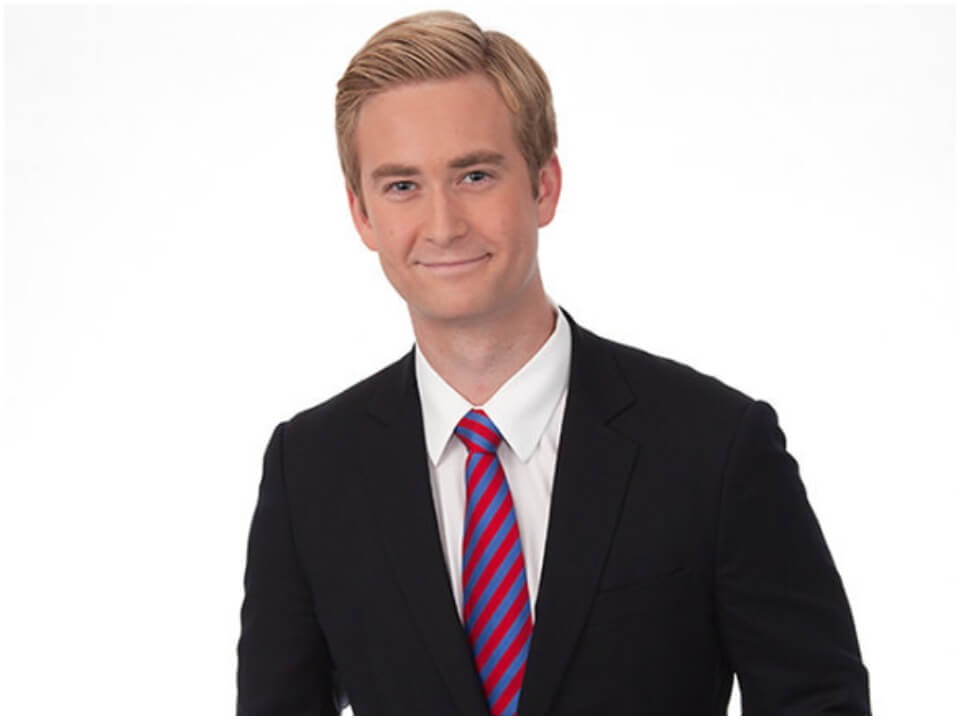 Peter Doocy is an American journalist who is famous for being the White House Correspondent for the Fox News Channel. He is also known as the son of the famous Co-host of Fox and Friends, Steve Doocy.

Peter was born on 21st July 1987 in Washington DC, the USA to his father Steve Doocy and his mother Kathy Gerrity. There is not much information available about his mother but his father is a famous host for Fox Channel and has appeared in shows like Fox and Friends. He is currently 33 years old and grew up with two siblings sisters Mary Doocy and Sally Doocy. He is the grandson of JoAnne Doocy and James Edward Doocy.

Peter has not shared much about his early education but it is believed that he completed his high school education from his hometown in Washington DC. In order to pursue higher studies, he went on to join Villanova University in Pennsylvania. He graduated in 2009 with a Bachelor of Arts degree in Political science. While at college he was actively part of various political, sports, and journalism events and projects. He also actively contributed as a Palestra (Cathedral of college basketball) reporter as an Intern for Fox Channel.

Peter started as an intern for various channels and events including Fox channel. After graduation in 2009, he joined Fox channel as a general assignment reporter for Fox News in New York City. He reported several important events, natural calamities, presidential campaigns, etc. Peter has covered various stories like that about former Vice President Dick Cheney’s heart surgery in 2012, the floods in the Midwest in 2011, Hurricane Sandy, etc. he also covered the 2008 and 2012 presidential elections. He also reported on the Sandy Hook Elementary School shooting.

He also covered the 2020 democratic Presidential party campaigns of party Nominee Joe Biden. Doocy was soon given a post as a White House Correspondent for Fox Channel in January 2021 and given the task to cover Biden’s Presidential campaign. He is currently a reporter from “Capitol Hill” and a White House Correspondent based in the capital Washington DC.

Peter has not shared much about his personal life but through his Instagram, it is known that he recently married fellow Fox correspondent, Hillary Vaughn. The exact date of their marriage is unknown and he has not shared any more details. It is known that since he couldn’t meet his father much during his early years, they bonded through Yankee games whenever they met. Peter is a huge basketball enthusiast and used to actively play the game in middle school and high school.

Peter is highly active on social media platforms. He has been active on his Twitter account since 2009 and currently has 150k followers. Peter often tweets about news and political issues on his account. He also has an Instagram account where he currently has 21k followers where he likes to post about his personal life, friends, and family. Doocy also has a Facebook page where he has 14k followers.

Peter has been working as a journalist since 2009 and has actively covered important events for Fox Channel. He has earned a lot of income and assets over the years majorly sourced by his career as a journalist. His average annual salary with Fox is around $100,000. His estimated income as of 2021 is around $800,000.