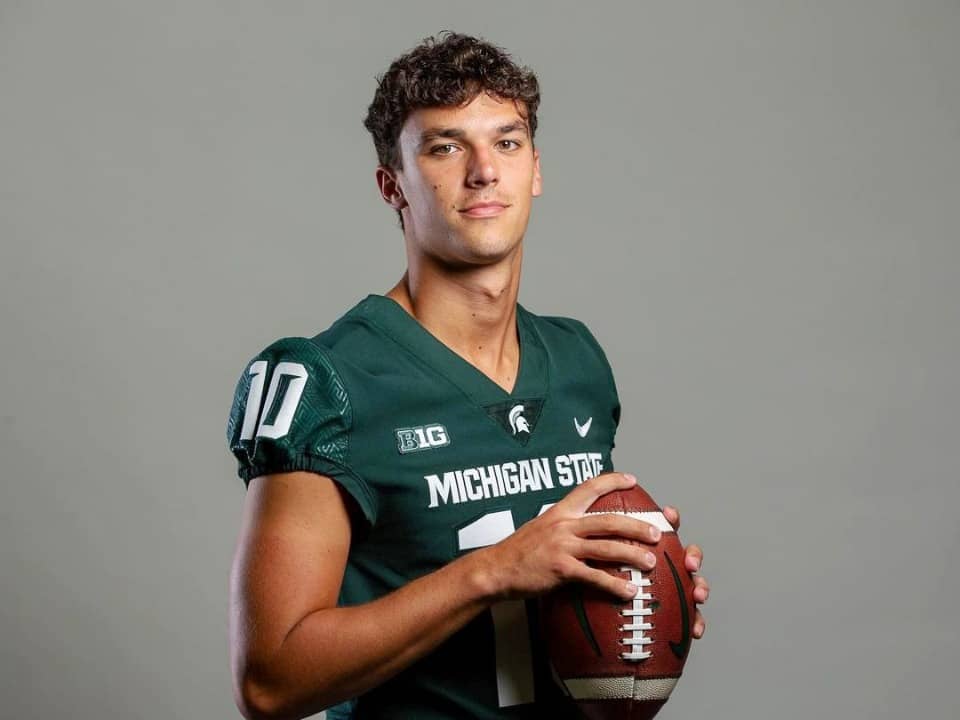 Payton Thorne is an American football player who currently plays for the team Michigan State University Athletics as a quarterback. He belongs to a family of football background and has maintained his great performance and skill in his own career as well.

Payton was born on June 26th, 2001 in Naperville, Illinois, USA. He was born in a white Christian family and belongs to a family of athletic background. His grandfather was a high school football coach and also coached at the D3 North Central College while his maternal grandfather was also a football player for Wisconsin. His father Jeff Thorne was offensive coordinator at North Central College and later became assistant head coach in 2010 and was also a quarterback player in his time as well.

Joana Thorne is his mother’s name and completed his high school education at Naperville Central high school where he was also part of the school football team. He studied till sophomore year at Metea Valley high school and later transferred to Naperville central. He graduated in the year 2019 and went on to join the University of Michigan where he is currently pursuing his degree in communication major.

Payton started his career early on in his life and in high school, he was also part of the school football team. He started playing for the Metea valley high school team and played his freshman and sophomore season where he managed to build a great record. Payton transferred after sophomore year to Naperville central and coached under Mike Stine. He completed 5367 passing years and 65 touchdowns in the two years with the team and won several titles. By end of his high school career, he was named as a top-ranked prospect in Illinois, the best pocket passers in the nation, and the best overall player in Illinois by 247sports and ESPN. He was also ranked as the no 16th dual quarterback in the nation.

He was also selected as first-team All-IHSFCA class 8 and as All-USA Illinois First team by the USA today in 2018. After high school, he joined the Michigan State Spartans team at the University of Michigan and started playing as a quarterback. He was redshirted in his freshman year and also played his best in the season against Indiana for which he was also named Scout Team Player of the week. Payton started playing as the quarterback for the team in 2020-21 seasons after the team’s quarterback Anthony Russo transferred to another college and played 4 games with great performance. He is now set to play as the team’s quarterback for the upcoming seasons after being redshirted in previous years. He will be the third generation quarterback in football after his grandfather and father.

Payton is not known to be in any relationships as of now and is believed to be single. He has often shared pictures with his prom dates but was never confirmed to have dated them. He keeps his dating and personal life private and does not share much. Payton is active on Twitter since 2016 and currently has 2145 followers. he is also known to be on Instagram where he currently has around 6000 followers. He is not known to be on any other social media platforms other than this.

Payton is currently a college athlete and thus, he does not have any regular means of income. He earns through his matches and prices from winning championships. His family net worth as of 2021 is estimated to be around $250,000.