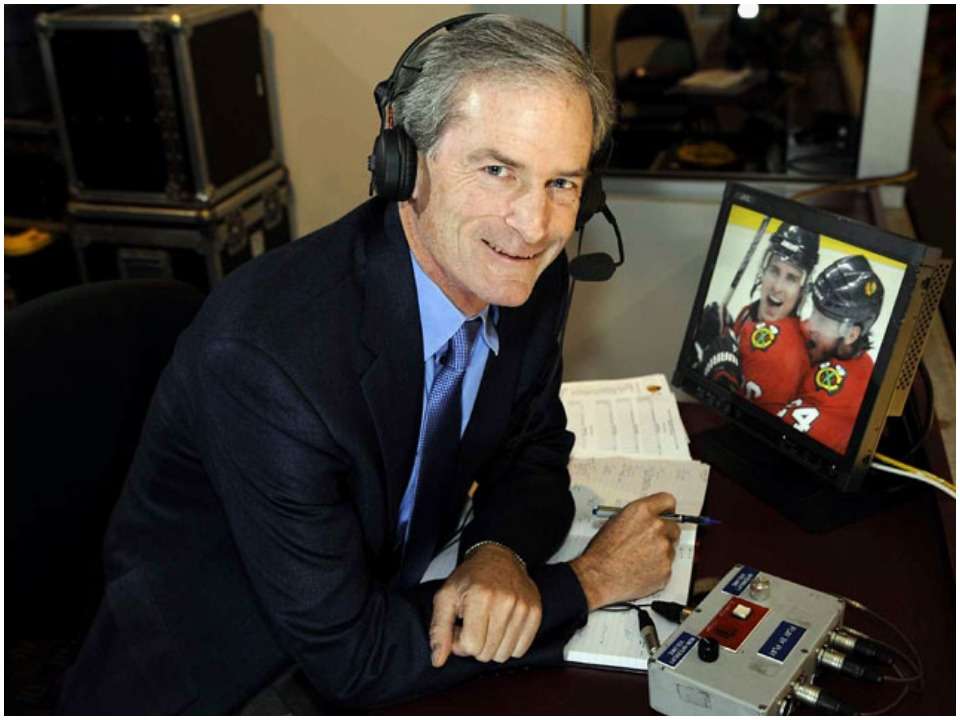 Pat Foley is an American personality who has remained an active part of the commentary team for ice hockey. He won an Emmy Award back in 1991 and was also inducted into the Chicagoland Sports Hall of Fame in 2002. Once John McDonough (an American sports executive who has been working with Chicago Cubs for two decades) called Foley a synonymous personality who has been working with Blackhawks Hockey with the resonating voice and creating an entire fanbase. Despite earning an Emmy Award back in 1991, Foley has also been described as an Emmy Award winner (by Wikipedia) in 2009, 2012, 2014, and 2015.

Pat was born on 23rd December 1954and spent his childhood raising up in Glenview, Illinois under the parenthood of his caring parents named Mary and Bob Foley. He is a graduate student of Loyola Academy and Michigan State University, from where he received a Bachelor of Science in telecommunications. Back in 1964, Foley was given a chance to be there in a radio booth at Wrigley Field, where he sat alongside the famous announcers Lou Boudreau and Jack Quinlan. This event sparked his interest in play-by-play commenting, so he started his career with the announcements of minor league hockey games.

He used to call baseball hockey games and began his career with Grand Rapids, Michigan. During the time Foley used to pass commentary on the games, his father would have taken the recordings at Grand Rapids Owls’ games and would pass the same to Michael Wirtz, brother of Bill Wirtz, owner of the Chicago Blackhawks. This helped Foley secure a position at the company and this marked the beginning of his first game on 19th October 1980. Foley started getting regular projects with the company. Therefore, he continued with the commentary or play-by-play commentator from 1981 to 2006. He was fired while working for the Blackhawks amid the rift in 2006. Later, Foley spent his time calling games for the Chicago Wolves in the 2006-07 and 2007-08 AHL seasons. In 2008, Foley returned to the Blackhawks following the death of Bill Wirtz and got himself partnered with Eddie Olczyk.

On 23rd June 2021, the Blackhawks announced via Twitter that the 2021-22 NHL season would be the final season for Foley for the work of calling games. Foley called his last game with Olczyk (who is 55 years old and has remained a former center in the National Hockey League for 16 seasons) on 14th April 2022 and let the Blackhawks host the San Jose Sharks. Back in 2002, Foley was inducted into the Chicagoland Sports Hall of Fame. On 19th April 2013, Foley was honored for his 30th season with the Blackhawks by NBC Sports Chicago. Later in 2014, Foley was honored with the Foster Hewitt Memorial Award, later to which he was given the entry to the Hockey Hall of Fame. In 2019, he was named an Illinois Sportscaster of the Year by the National Sports Media Association.

It is uncertain to say that Foley has not revealed his marital status yet after 30 years of his career in the field of play-by-play commentary. It would be “not suitable” to say that he is unmarried at this stage of life where he has become nearly 67 or 68 years old. For the moment, Foley’s marital status is unknown, as no one supports the fact that he is married and has children. Also, he has never revealed his family members in front of the media or in the field of commentary.

Pat Foley is surely earning a hefty amount because of his only profession of play-by-play commentary. Although Foley has called it the retirement of his lifetime career with the Blackhawks, he has covered a huge career of more than 30 years, dedicating most of his years to the Blackhawks. It is for sure that he is earning around $2 million as his estimated net worth, which is enough to provide him with a luxurious lifestyle.