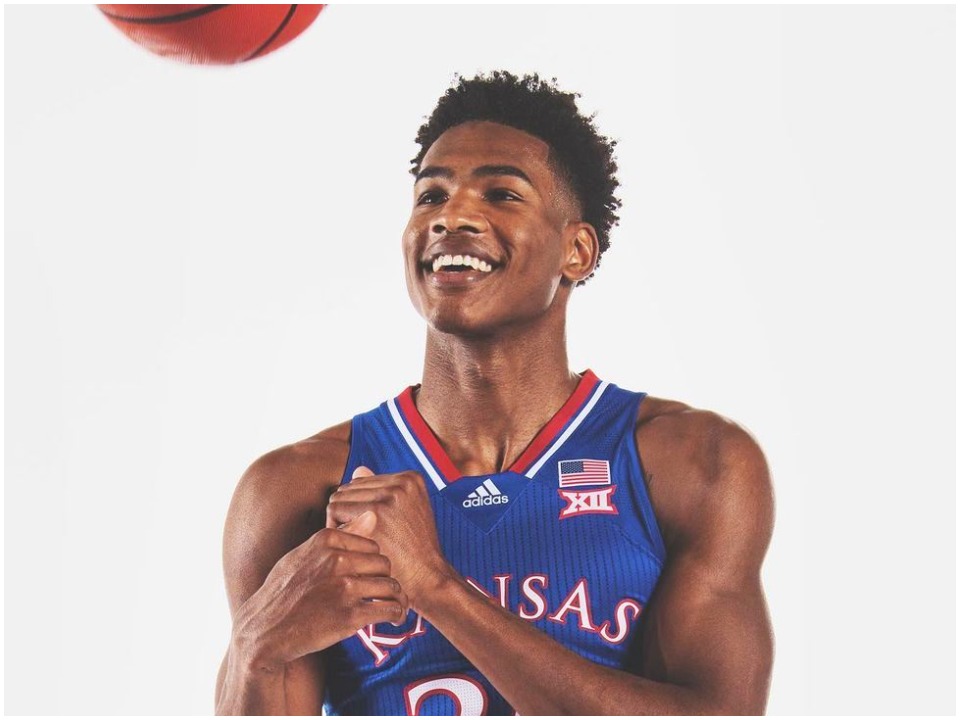 Ochai Agbaji is an American personality who is committed to college basketball and the University of Kansas. He is a young, aspiring, 21-year-old personality who has achieved a career with several honors. He has received the honor of consensus First Team All-American 2022, Big 12 Player of the Year 2022, and First Team All-Big 12 2022.

Ochai Agbaji was born in Milwaukee, Wisconsin, after which the family moved to Kansas City, Mo, where he was brought up till he became an adult. He was nourished by his loving and caring parents named Olofu (Father, who moved from Nigeria to the U.S. at the age of 17 and played basketball at the University of Wisconsin-Milwaukee) and Erica (Mother, who also played college basketball at the University of Wisconsin-Milwaukee). Ochai was nurtured along with his older sister named Orie, who is currently committed to playing volleyball for Texas. He was brought up while playing soccer with the encouragement of his father. So, he started playing club soccer as well as Amateur Athletic Union (AAU) basketball from a young age.

Later, he stopped playing soccer and turned to be a sophomore while playing only basketball and committed to Oak Park High School in Kansas City, Missouri. Ochai got a stretch in his height while playing basketball in between his freshman and junior years. While playing basketball and maintaining a career in the field, he did not receive any offer from any Power Five college programs until he turned to his senior season. Ochai earned an average of 27.6 points as a senior with 8.6 rebounds per game for Oak Parks and was subsequently named Kansas City Star All-Metro Player of the Year. He was considered to be a three-star recruit by 247 Sports and RIvals. He started receiving many offers from different college teams including Kansas, Wisconsin, Texas A&M, and many others. Later on 8th February 2018, he declared that he would remain committed to Kansas.

Ochai began his freshman career with Kansas as a redshirt and was committed to the scout team in his early years. His redshirt was lifted in January 2019, after various issues took place with the two members of the team. One of the team members, Udoka Azubuike suffered a season-ending injury, while another member Silvio De Sousa faced eligibility issues. Consequently, Ochai made his career start with scores of 24 points, 7 rebounds, and stealing the ball twice in a loss to Texas. In the next game, he made his first double-double with a win over Texas Tech. He was honored with Big 12 Conference Newcomer of the Week for his first two performances. He made an average of 8.5 points, and 4.6 rebounds per game, where he played nearly 22 games with a start of 16 games in his freshman years.

Ochai also earned the honor of Honorable Mention All-Big 12 while scoring 15 points in a loss to the fourth-ranked Duke at the Champions Classic. He made an average of 10 points and 4.2 rebounds per game as a sophomore and finished while being second on the team with 46 three-pointers. In April 2021, he mentioned his achievements while declaring his availability for NBA DRaft 2021 and while being committed to college eligibility. With the start of his senior season in November 2021, he made a record of 29 points with a win over Michigan State with an overall score of 87-74 at the Champions Classic. In January 2022, he made a career-high ranking of 37 points with 94-91 double overtime and a win over Texas Tech. at the climax of the season, he was given the honor of Big 12 Player of the Year.

The 21-year-old young basketball personality, Ochai Agbaji, who has earned many honors in the single season of 2022, earns a net worth of around $1 million. This amount may include his collaborations and sponsorships.