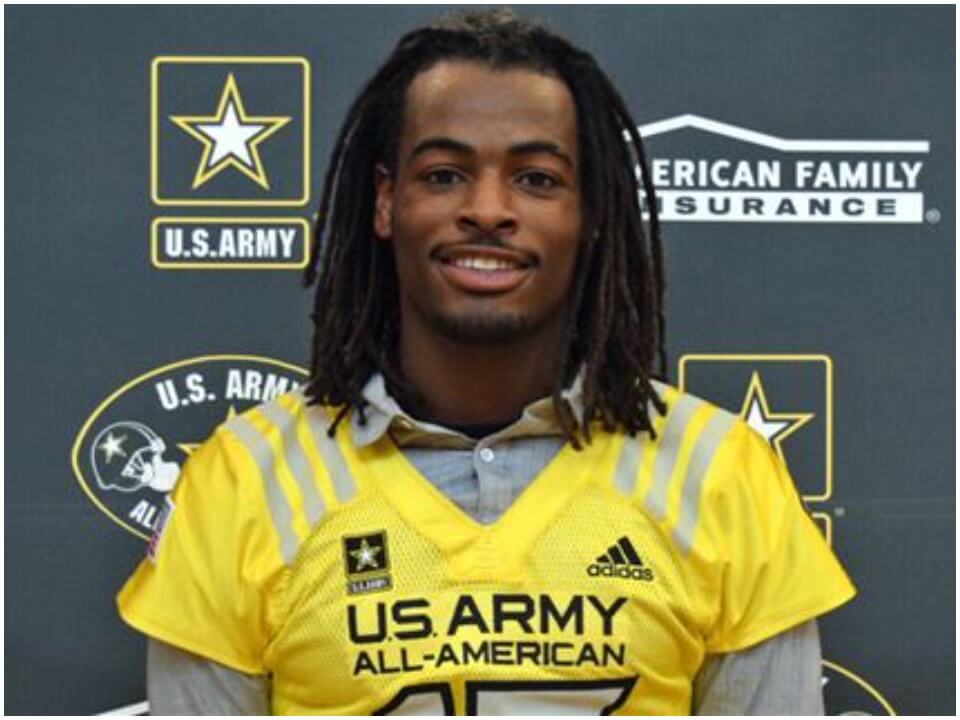 Najee Harris is an American football player who plays at the running back position for Pittsburg Steelers at National Football League. He is a college football prodigy and was recently selected in the 24th overall in the 2021 NFL draft.

Najee was born on March 9th, 1998 in Martinez California. He is of black ethnicity and follows Christianity. He is currently 23 years old. There is not much information about his parents or family but his mother’s name is known to be Tianna Hicks and his father is Curt Harris. He grew up with his family in Antioch, California, and in an interview, he told that he shifted to various places and his family lived in heavy financial problems, homelessness, and abuse. Najee is known to have three siblings, a sister, and two brothers. He is the youngest child in his family. He was always active in sports as a kid and wanted to become a football player.

Najee completed his middle school education from a local school in Antioch and for his high school education, he attended Antioch high school in 2013. He joined the high school football team and in the sophomore year of high school, he made various records. After graduating in 2016, he went on to join the University of Alabama to pursue college studies and football. He completed college in 2020 and graduated with a degree in consumer sciences with a social welfare minor.

Najee started his career in football in high school where he played on the school’s football team. In the sophomore year of high school, he rushed 2263 yards with 24 touchdowns while in his senior year he did 2775 yards with 34 touchdowns. He set up an impressive record in his high school years which led various top college football teams to approach him for recruiting including Alabama “Crimson tide” and Ohio State Buckeyes. Later his career took off when he started playing in the college football team of the University of Alabama at the running back position in “crimson tide”. In his freshman year, he played 14 games and finished the season with 370 years and 61 carries. In his sophomore year, he played alongside Damien Harris and Josh Jacobs in 15 games.

He finished the season with 783 yards on 117 carries and scored 4 touchdowns. Najee played his best against Arkansas state. In his junior year, he became the main running back player after Damian and josh went to NFL. That season in 2019, he recorded 1224 yards and 13 touchdowns. He was anticipated to go for the 2020 NFL draft but he stayed to complete his senior year in college. In 2020, he again played as a running back player and the team won against Georgia bulls and Missouri tigers.

Najee recorded his best game of the season again ole Miss where he recorded 206 yards and 6 touchdowns. He finished his college football career with impressive records and great form. He was recently selected as a running back player by the Pittsburgh Steelers in the 2021 NFL draft as the 24th overall pick. Najee surpassed the record of Le’Veon Ball to become the leading rookie rusher through six games for the Steelers.

Najee hasn’t shared much about his personal life and relationships. He has been highly personal about his private life. Currently, he is not known to be dating anyone and is single. He is more focused on building his career to overcome all the early life struggles he faced in past. Najee is very close with his mother and frequently uploads pictures with her. He also likes to devote his time to his faith and religion and is a true believer in god.

Najee has only recently started his career and has only played in college football matches till now. As college players don’t get paid, it is difficult to say that he made a lot of income till now. Moreover, he is still dependent on the family as of now and thus the net worth is estimated accordingly including his income after joining NFL. As of 2021, his net worth has been around $500,000.