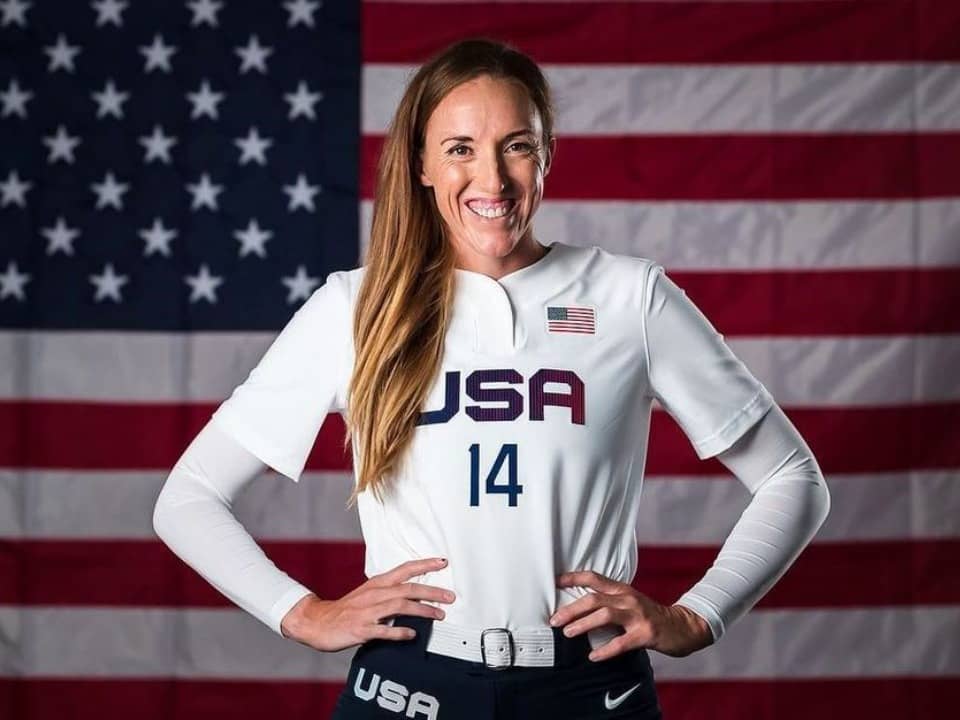 Monica Abbott is an American Professional Softball player who plays as a left-handed pitcher and has experience in pro leagues like NPF as well as in the Olympics. She is in the Olympic squad for the US national team and is set to play at the 2020 Tokyo Olympics. Monica turned out to be a great prospect for the team as she helped her side to reach the gold medal game against Japan.

Monica was born on 28th July 1985 in Santa Cruz, California, the USA under the parenthood of Bruce and Julia Abbott and grew up in Salinas, California. She is also known to have four siblings, Jessica, Jarad and two twin siblings Bina and Gina. Monica is next to the oldest sibling Jessica. She is a Christian by religion and is currently 35 years old.

Monica started her career as a high school softball player where she was part of the school team Vikings and played at CIF central coast division 1 and led the team to win the title three times. By the end of her high school career, she was named the Cal-hi softball player of the year, the year’s sports focus athlete, and the state large school player of the year. She got offered by a lot of colleges but chose to pursue her collegiate softball career with the University of Tennessee in 2004. She became the team’s first all-American and also won the title of SEC freshman of the year.

The following year, she became the first pitcher in NCAA Division 1 history to record 500 strikeouts in a single season twice in her career. In her junior year, she again won several titles including the NCAA All-American and First-team All-south region. She also recorded more than 500 strikeouts and for the third time. In her senior year, she played with excellent form and became the USA Softball collegiate player of the year 2007. She also received the honor of Women’s sports foundation sportsman of the year.

In 2008, she was selected in the Olympic squad for the US national team as one of the three pitchers and her first match in the Olympics was against Venezuela. The team reached the finals but lost to team Japan. She also joined the US national team in the world softball championships during 2005 and 2010. She led the team to win four times. Monica again played with the team in 2018 and helped to win the USA international softball cup, Japan Cup as well as Pan Am games.

At NPF she played for USSSA pride in 2009 but later was drafted by Tennessee Diamonds in 2010. In 2015, she went to play with the Chicago Bandits. Later, in 2016, Scrap Yard Dawgs signed and played several seasons in her six-year contract. She became one of the top 10 pitchers in NPF with Five pitchers of the year awards and 9 times All-NPF team titles.

In 2010, she also played at the Japan Softball league with the Toyota Motor company team named Red terrier. She led the team to win the title from 2010 to 2018. Monica is currently playing her 11th season in the league and is also selected in the Olympic squad for the 2020 Tokyo Olympics in June 2021. She is one of the three pitchers for the team and in the opening game against Italy, she led the team to win by a 2-0 score. The team is now set to play next with Canada. Olympic’s official site listed her as one of the best pitchers in the current competition.

Monica has not shared much about her personal life and relationships and she is currently engaged to be married to Jeff Bower, a head equipment manager at St Louis XFL. They announced their engagement in 2019. She is currently focused on her career and has not shared any plans for the marriage in near future.

Monica has been playing as a professional player fr several years and has also represented the national team on the biggest platforms. She has earned a lot of wealth through her career as a softball player and her net worth as of 2021 is estimated to be around $6million.

Monica is a highly talented pitcher and athlete who has worked hard to achieve several milestones in her life. She has got the opportunity to play for the national team in the Olympics and is again set to step forward in the same direction. Monica has outshone herself every time and appeared as a better pitcher in every game. She is very grateful for all the support and loves to help other young women achieve their dreams. We wish her luck for the Olympics.