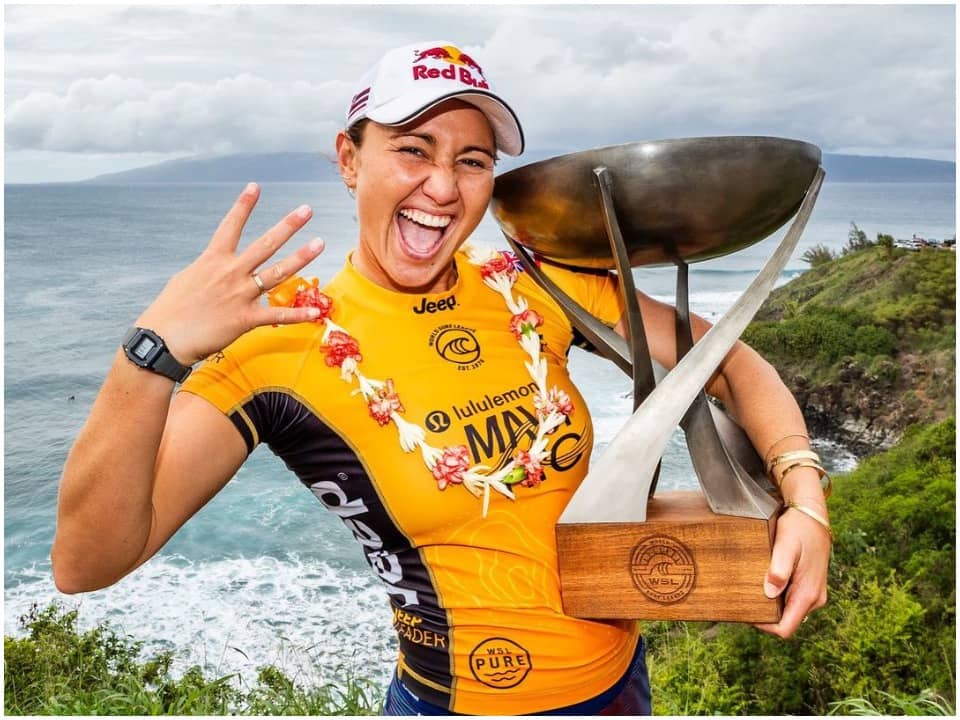 Carissa Moore is an American Professional Surfer who has been honored at the Surfer’s hall of fame in 2014 and is currently a part of the USA national surfing team representing at the 2020 Tokyo Olympics.

Carissa was born on 27th August 1992 in Honolulu, Hawaii, USA. She was born to her parents Carol Lum and Chris Moore. Her father was an Open water swimmer who won several competitions and also taught Carissa to surf. Much is not known about her mother but it is known that her parents divorced when she was 10 years old and grew up with her father in Hawaii.

She started surfing at the age of five and has been loving the sport ever since. Carissa is also known to have a younger sibling sister named Cayla Moore. She is currently 28 years old. Carissa has not shared much about her education but it is believed that she completed her high school graduation from Punahou school in Hawaii in 2010. She has not shared anything about having pursued a college education as well.

Carissa started surfing on a competitive level when she was 11 years old and started competing at the NSSA junior surf competitions. In the succeeding years, she started competing at the ISA world junior surfing championships and secured top ranks. She became a finalist at the ASP women’s world tour Roxy pro in 2007. After that in 2008, she recorded a total of 11 NSSA titles and also became the youngest to win the triple crown of surfing at the Reef Hawaiian Pro at the age of 16. The following year in 2009, she became a wild card entry and won ASP women’s world tour Gidget pro sunset beach event. In 2010, she competed at the ASP world tour where she finished at 3rd position and also became the rookie of the year.

The same year, she also won the US Open of Surfing and became the World Tour champion in 2011 following up the victory in 2013 and 2015 as well. Meanwhile, in 2014, she won three WSL women’s championship events and attained her third world title in 2015 at the WSL event. She continued her form in the following years and by 2018, she became world Number 3. She was then honored in the Surfer’s Hall of Fame in 2014. In the more recent years, in 2019 she won her fourth world title at the WSL women’s championship tour which secured her qualification for the 2020 Tokyo Olympics.

She took a break from a world tour in 2020 to prepare for the Olympics. She has also become the first Hawaiian to ever compete at the Olympics. In 2021, at the Olympics, Carissa won her heats and the 3rd round to qualify for the Quarterfinals where she had a close competition against Silvana Lima making her way to the Semi-finals. She again won at the Semi-finals and qualified for the final match against South Africa where she surfed with excellence and managed to secure a Gold for the USA.

Carissa is currently married to her husband Luke Unterman, co-founder of Banan. The two have been dating since high school and got married in December 2017 in North Shore. The two do not have any kind as of now and are settled in Hawaii.  She is known to be a great lover of pets and dogs and also has a pet dog named Maya. She is an enthusiastic traveler who loves sharing her experiences.

Carissa has been surfing for several years on the International level and has earned a lot of money through winning competitions and through sponsorships. Her net worth as of 2021 is estimated to be around $2.5million.

Carissa is one of the most famous American women surfers in the present-day ranked consecutively among the top 5 surfers in the world. She is also a loving wife and a daughter who likes to share gratitude with her loved ones. She has worked hard to achieve what she is today and has now reached the highest milestones by achieving a gold medal at none other than the Olympic Games. We wish her all the happiness and luck for her future.