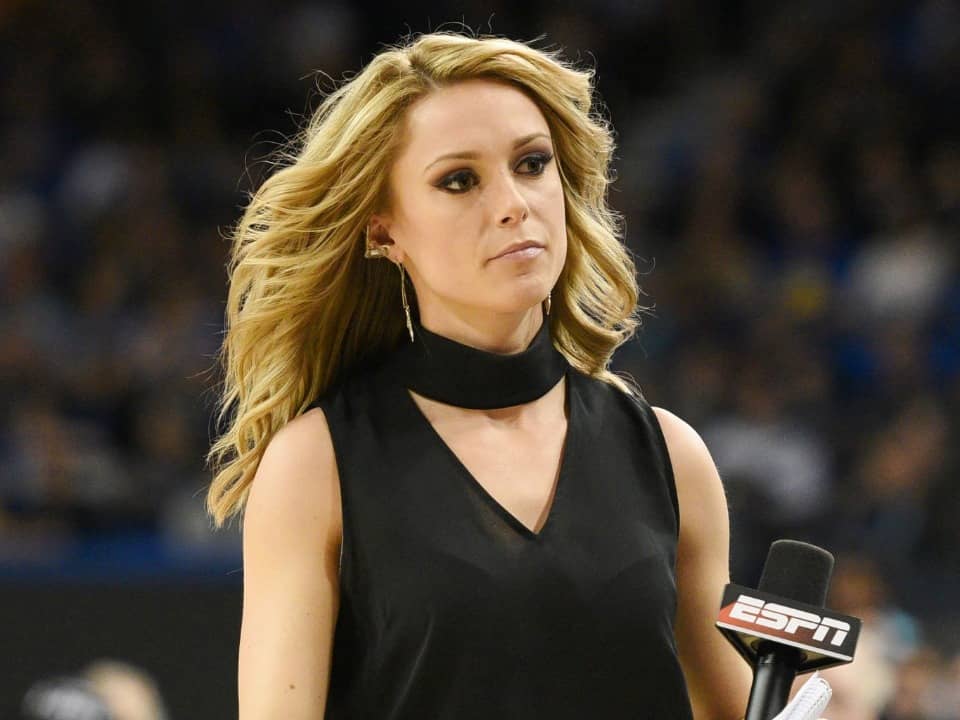 Molly McGrath is an America-based anchorman who hosts sports and works as a studio host. Currently, she is working as a sideline reporter for ESPN casting college football and college basketball.

Molly was born on 6th June 1989 in San Fransisco, California. Her parents are Deborah and Michael McGrath and also has an elder brother who plays football at Princeton University. She has been nurtured and grown up in Burlingame, California where she attended St. Ignatius College Preparatory. She has done her graduation in 2007. Thereafter, she attained the degree of Bachelor in Arts in Communication and Broadcast Journalism and visit Boston College for the same purpose and attained her graduation degree in 2011.

She used to pitch the athletic directors and interviewed athletes and coaches for a college website named BCEagles.com. This helped her to create a ladder for the job description for the future. She put together the reel which helped her to secure her first on-air job. While being at BC, she was also posted on intern posts at NESN and WHDH-TV.

Soon after graduation, Molly McGrath worked at ESPN as a production assistant where she used to cover the plays, producing highlights for the games and supporting other tasks for various ESPN shows. In 2011, Molly McGrath was hired as a web reporter. Her work was limited to hosting, producing, and editing daily updates including the exclusive interviews and packages for the Celtics’ team website. She further hosted the shows like Celtics Now and worked as a sideline reporter for CSNNE’s regional broadcasts.

While working for Celtics, an executive of Fox Sports found the clips of Molly McGrath’s work on YouTube and connected with her via Facebook asking about the job work opportunities with the network. Later, she was chosen to be among the several initial hires by Fox Sports 1 based in Los Angeles where she was hired in the summer of 2013. Initially, she was hired as an update anchor. Later she worked hard that made her increase her ranking.

In 2014, she joined Mike Hill as a co-host and worked with her as a co-anchor to spot the highlights of the show called America’s Program. Also, she was led as a sideline reporter for Fox College Football and Fox College Basketball. She covered many games for the network. In 2015, she hosted the sixth season of Battlebots on ABC. This made a great opportunity for her to elevate her career with anchoring and broadcasting sports. Recent Working with ESPN from 2016 till present

In the summers of 2016, Molly McGrath returned to ESPN and worked as a sideline reporter for college sports and co-hosted college football live. For the 2016 college football season, McGrath worked as a sideline reporter for the games like ESPN College Football Friday Primetime. She covered the sidelines of ESPN college basketball and telecasted the games live.

Molly continued her work with ESPN till 2017 and hosted various halftime shows and episodes including College Football Live. She covered several bowl games which she continued to cover till 2018. For the 2018 football season, McGrath covered Saturday games called ESPN College Football on ESPN or ABC. Later in 2018 and 2019, she covered weekly big football season including Super Tuesday college basketball. For the year 2019, she used to cover two college football games per week. Recently, she is working on XFL 2020 for week 2 of the season.

While being at Boston College, she was appointed as the captain of the cheerleading team for which she earned the director’s award for her excellent performance in all consecutive four years. Currently, she lives in Seattle with her husband. Her husband named Max Dorsch who is a professional in commercial real estate investments. From this marriage, the couple is blessed with a child, Raymond Michael Dorsch V.

She is a well-known sports journalist who is assumed to have a net worth of $1 million. She loves branded clothes and often visits different places for vacations with her husband or family. Currently, she is residing in a house with her family and two dogs named Stewart and Matthew.