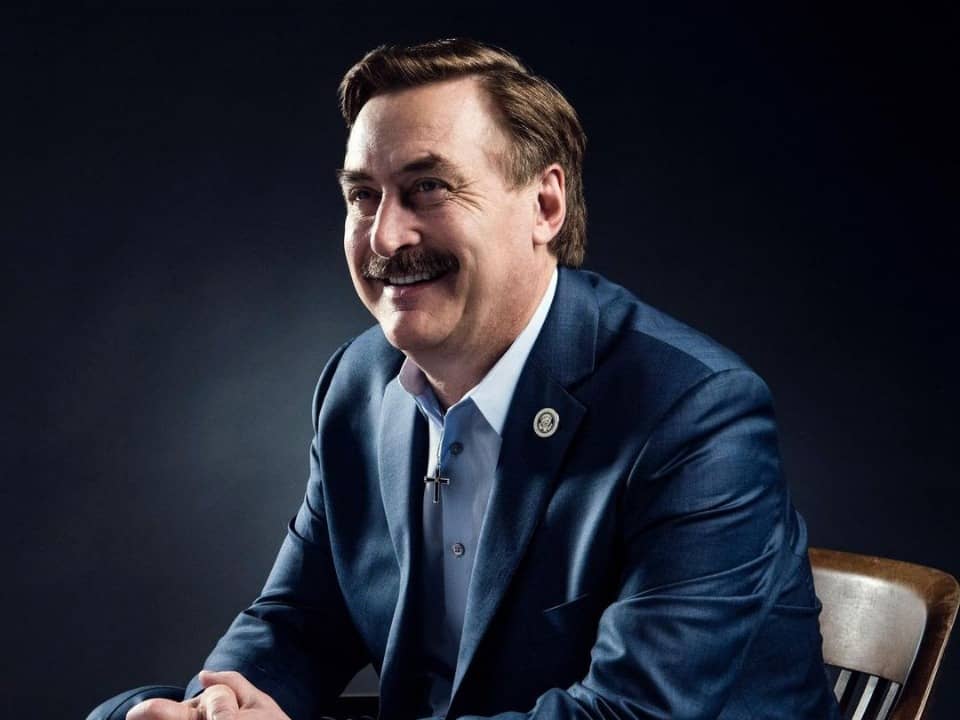 Mike Lindell or Michael James Lindell is an American Businessman who is famously known as founder and CEO of My Pillow, a bedding manufacturing company. He is also a philanthropist who found the Lindell Foundation to help fight drug addiction. He is currently on the three days of the “cyber symposium” and suddenly left the stage after finding out that the $1 billion lawsuit which was filed against him moved forward.

Mike was born on 28th June 1961 in Mankato, Minnesota, USA. He grew up in different towns including Chaska, Carver, and Mankato. Mike is known to be an evangelical Christian and belongs to the white Caucasian ethnicity. He has not shared much about his parents and family background and is also not known to have any siblings.

Mike is known to have completed his high school studies at a local high school in Minnesota and he later went on to pursue his college studies at the University of Minnesota. However, he did not complete his college degree and dropped out within a few months. He later received and an honorary Doctor of Business from Liberty University in 2019, for his expertise as an entrepreneur.

Mike started his career by starting small businesses like carpet cleaning, lunch wagons, restaurants, etc in the 1980s. Years later, in 2004, he started his company named ‘My Pillow” a manufacturing company for bedding, slippers, etc. He ran the business well for a while and rated it as the top manufacturing company. However, in 2017, the company was rated F by Better Business Bureau due to a high number of customer complaints. In 2018, he heavily got involved in politics and also started speaking at rallies for Trump. The following year, he worked with Trump regarding the issues of Opioid addictions and also attended conferences for Republican Party.

By 2020, he was named as the campaign chair of the Trump Re-election campaign. Recently in 2020, his son took the position of the Company’s Chief Operating Officer and Mike went on ahead with his possible future political plans. As of 2021, the company is in a difficult position and is losing a large segment of customer and retailer base which is analyzed to be due to lack of market research and low attention on customer demand.  He is also known to be an author and has self-published a book named What Are the Odds? from Crack Addict to CEO about his addiction recovery.

This year, in April he also launched a social media political commentary platform called “Frank” but the launch was filled with a lot of technical issues. The platform was to promote conspiracy theories about the 2020 presidential election. He has announced his willingness to run as the Governor of Minnesota in 2022 and also attended the Republicans Governors association meet.

Mike was recently in news for having been recognized as one of the people who paid for the bail of Kenosha Shooter, Kyle Rittenhouse to which he responded by saying that he donated the money to “The Fight Back Foundation Inc. to help fund election fraud litigation. He also caused a lot of media spur recently when he said that the toxic plant extract Oleandrin could be used as a cure for Covid. Mike was earlier involved in spreading conspiracy theories during the 2020 Presidential election and was involved closely in his attempts to overturn the election results.

He was also involved in the rally which was help immediately before the Capitol attack. Mike was also involved in a defamation case along with Sydney Powell and Rudy Giuliani regarding the Dominion Voting Systems which he anticipated to be free from this year but instead, the judge gave a green signal to continue the suit. He owes billions of dollars of damages to the parties regarding the case.

Mike currently has 202k followers on his Instagram account and a following of 54k on his Facebook Page. He is not known to be on any other platforms.

Mike is currently known to be a single divorced man and has been married twice in his life. He was earlier married to his first wife Karen Dickey and stayed with her for almost 20 years. The couple also gave birth to four children but got divorced. He then married Dallas Yocum in 2013 but they also got divorced the same year. Recently he was rumored to be involved with actress Jane Krakowski since 2019 but none of the rumors were confirmed.

He is known to have spent his teen years under the influence of gambling and in his 20s, he got highly addicted to drugs like cocaine which ultimately led to his downfall adding up to his gambling debts, losing his businesses, his house, and also leading his wife to file a divorce.  He sobered up in 2009 and decided to help others battling from drugs.

Mike is known to be a philanthropist who has donated to organizations like the Salvation Army, Union Gospel Mission, etc. he also launched his own foundation named the Lindell Foundation to help people overcome and fight against drug addiction.

Lindell is quite a successful businessman and has been majorly sourcing his income from his business. His net worth as of 2021 is around $2million.